Footage of woman's unusual surgery goes viral: 'As narrow as a credit card' 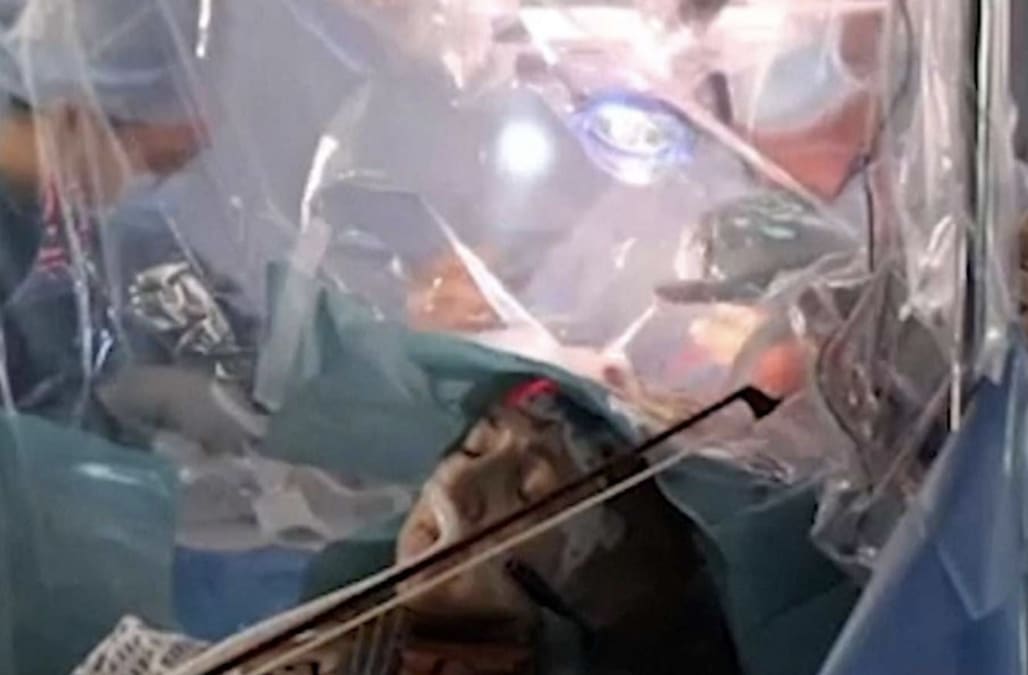 Dagmar Turner, 53, was purposefully woken up during her Feb. 18 procedure — which was meant to remove a brain tumor in her right frontal lobe — so she could play the violin to “ensure the surgeons did not damage any crucial areas of the brain that controlled” her “delicate hand movements,” the hospital said.

Dagmar, who has a 13-year-old son, was diagnosed in 2013 with a large grade 2 glioma after suffering a seizure during a symphony, the hospital noted. She underwent radiotherapy to keep the tumor at bay but, by fall 2019, her care team realized it was becoming more aggressive and decided surgery was the best route for treatment.

The tumor apparently sat “dangerously close” to the parts of Dagmar’s brain responsible for controlling her left hand, which are “crucial for playing the violin,” the hospital said. In some spots, the tumor’s distance from those areas was “as narrow as a credit card.”

Professor Keyoumars Ashkan, a brain tumor specialist and consultant neurosurgeon at King’s College Hospital, is an accomplished pianist and holds a degree in music. The patient said she specifically sought him out to discuss treatment options due to his musical background.

“The violin is my passion; I’ve been playing since I was 10 years old,” Dagmar said. “The thought of losing my ability to play was heart-breaking but, being a musician himself, Prof Ashkan understood my concerns. He and the team at King’s went out of their way to plan the operation – from mapping my brain to planning the position I needed to be in to play. Thanks to them I’m hoping to be back with my orchestra very soon.”

Following the procedure, Ashkan also spoke out on the unusual nature of Dagmar’s treatment plan.

“King’s is one of the largest brain tumor centers in the UK,” he said. “We perform around 400 resections (tumor removals) each year, which often involves rousing patients to carry out language tests, but this was the first time I’ve had a patient play an instrument.”

“We knew how important the violin is to Dagmar so it was vital that we preserved function in the delicate areas of her brain that allowed her to play,” he added. “We managed to remove over 90 percent of the tumor, including all the areas suspicious of aggressive activity while retaining full function in her left hand.”

More from In The Know:
Amazon shoppers say these $23 leggings rival Lululemon
Here’s what to expect at Disneyland’s new Avengers Campus
Kylie Jenner swears by almond oil and shoppers love this $12 option