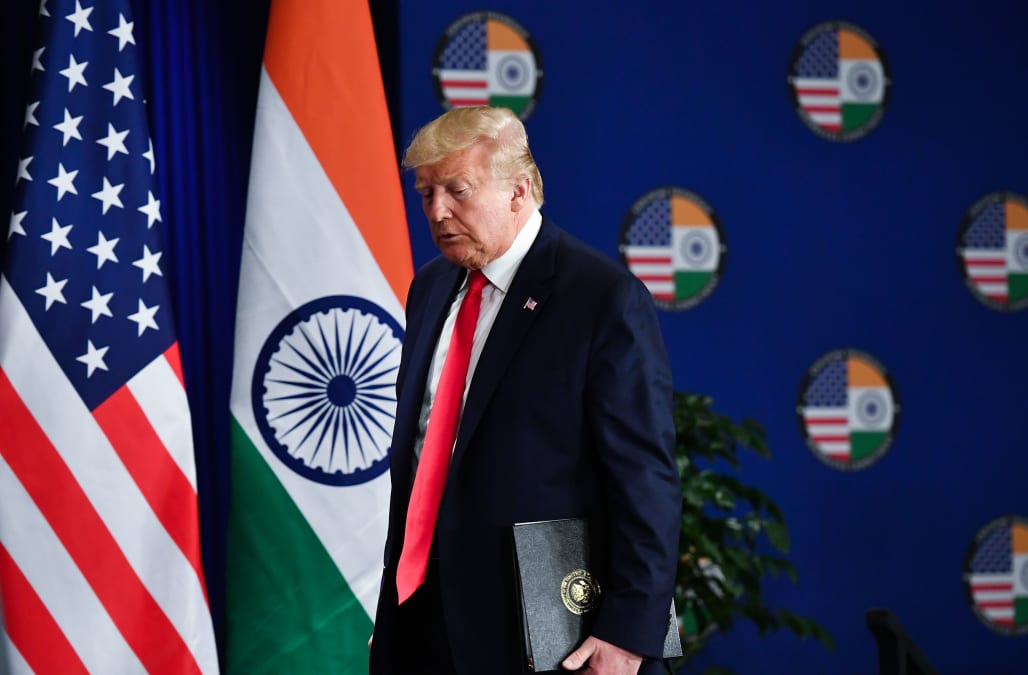 WASHINGTON — Top officials in the Trump administration struggled on Tuesday morning to justify their response to the growing threat of the coronavirus, which has sickened at least 80,423 people around the world and killed at least 2,712.

Having spread well beyond its origin in the city of Wuhan in China, COVID-19, as the disease caused by the virus is known, now appears poised to become a pandemic. Although there have been no recorded fatalities in the United States yet, skeptical members of the U.S. Senate made clear to administration officials that they did not have confidence in their response.

That was especially clear during a tense exchange between Sen. John Kennedy, R-La., and acting Department of Homeland Security Secretary Chad Wolf, who struggled to answer seemingly basic questions about the disease, including about its mortality rate relative to that of the flu.

At one point during their back-and-forth, which promptly went viral on social media, Kennedy insisted that Wolf tell him the number of coronavirus cases that the United States could expect.

Wolf was unable to answer the question, saying only that the number of cases would “grow,” and that “task force members” were at work on the issues.

That assertion only served to further irritate the Louisiana senator.  “You’re the secretary,” Kennedy retorted. “I think you ought to know the answer.”

There are currently 14 confirmed cases in the United States.

Kennedy then proceeded to quiz Wolf about how the coronavirus was transmitted. Wolf began to answer when Kennedy interrupted him again.

“How is it transmitted?” Kennedy said, no longer bothering to hide his irritation, his lips curling downward in annoyance.

“Tell me what they are, please,” Kennedy demanded.

Wolf responded that the primary mode of transmission was “human to human,” meaning that it is communicated from one person to another. That is the primary mode by which viruses are spread — though they can originate in animals, and frequently do.

Wolf, who does not have a medical background, struggled to answer the question to Kennedy’s satisfaction, making unclear reference to “being in the same vicinity” and “physical contact,” repeating that “human-to-human” cases were of concern.

“You’re asking me a number of medical questions,” an exasperated Wolf said a little later.

The exchange proved emblematic, to some, of a bungled response to a growing threat.

The confrontations took place on Tuesday in what were supposed to be budget-related hearings before the Senate Appropriations Committee. Legislators often use appropriations hearings — at which executive branch officials appear to defend federal budget requests — to question, criticize and scold the heads of agencies.

That was certainly the case during the respective appropriations hearings attended by Wolf and Health and Human Services Secretary Alex Azar. Both men are involved in the administration’s response to the coronavirus, as well as its controversial policies on the U.S. border with Mexico.

Trump offered his own opinions on the coronavirus from India — where he had been meeting with Prime Minister Narendra Modi — saying that “we’re very close to a vaccine” and that the United States was “down to probably about 10” cases. A report in the Washington Post indicated that Trump worried that sounding louder alarms about the virus would cause the stock market to plummet, thus robbing him of one of his favorite arguments for why his presidency has been a success.

Trump’s assertions clashed with what the Centers for Disease Control and Prevention appear to have concluded. “We are asking the American public to prepare for the expectation that this might be bad,” Nancy Messonnier, a top CDC epidemiologist, warned on Tuesday.

Before his appropriations committee appearance, Wolf had briefed legislators behind closed doors about the coronavirus. The briefing appears to have left senators dissatisfied. “I didn’t hear anything this morning that I haven’t read in the newspaper,” Sen. Jeanne Shaheen, D-N.H., complained to Wolf, asking him to hold open hearings.

The administration on Monday asked Congress for an additional $2.5 billion to fight the coronavirus, though Democrats said that was not enough.

Kennedy, the Republican from Louisiana, confronted Wolf with Trump’s statements from India. Apparently unmollified by the president’s optimistic assertions, Kennedy demanded of Wolf just how many more cases the United States could expect.

“Is someone modeling that?” pointedly wondered the attorney with an Oxford law degree.

Wolf began to say that Health and Human Services had “medical professionals” presumably doing that work. But he found himself cut off by Kennedy, who was growing plainly annoyed.

“But you’re head of Homeland Security. Your job is to keep us safe,” Kennedy asserted with audible dismay.

“You sure of that?” Kennedy asked.

The mortality rate for the flu is about 0.1 percent, making it about 20 times less deadly than the coronavirus.

Kennedy persisted, interrogating Wolf about whether there were enough “respirators” and “face masks.” He appeared to be referring to a supply adequate to cover the entire American population, not just the doctors who might constitute a first line of response.

Wolf appeared to be confused by the question, which only further angered Kennedy.

“Mr. Secretary, you’re supposed to keep us safe,” Kennedy said. “You need to know the answers to these questions.”

Wolf additionally said that a vaccine was “several months” away. Public health officials at the CDC, however, estimate that developing a vaccine that is ready for dissemination will take a full year to develop, test and mass produce.

Later, in response to more conciliatory questioning from Sen. John Hoeven, R-N.D., Wolf tried to highlight the fact that U.S. authorities are aggressively screening fliers returning stateside at 11 airports, which has resulted in the screening of 50,000 individuals thus far.

Wolf added that he was “very satisfied” by Homeland Security’s response to the coronavirus threat. But by that time, clips of his exchange with Kennedy had been viewed thousands of times on the internet. That and other developments are likely to put the Trump administration in a defensive posture precisely at a time when it needs to be projecting confidence and competence.

Azar, the Health and Human Services secretary, also faced tough questioning about the coronavirus, though as a high-ranking veteran of the pharmaceutical industry — he was once a top executive at Eli Lilly — he appeared better equipped to handle concerns about the growing epidemic than Wolf had been.

In his opening statement, Azar said that risk to Americans from the coronavirus was “low,” but that the spread of the virus to nations outside of East Asia was “deeply concerning.”

Yet he, too, struggled to reassure senators who feel the administration simply has not done enough, or has been forthcoming enough about what it is doing.

The Appropriations Committee’s chairman, Sen. Richard Shelby, R-Ala., said the administration was “lowballing” by asking for only $2.5 billion in its coronavirus response. “If you lowball something like this,” Shelby warned Azar, “you'll pay for it later.”

In response to questioning from Sen. Patty Murray, D-Wash., Azar admitted that the United States had not stockpiled sufficient resources to deal with the outbreak. “Well, of course not, or we wouldn’t be asking for a supplemental to seek more money to procure more of that,” he told her.

Much as Wolf had before him, Azar conceded that the nation has only 30 million respirators of the recommended N-95 model, whereas some 300 million are required merely for medical professionals to handle the disease response.

A “vaccine candidate” is in the works, Azar said, alluding to a report in the Wall Street Journal about a potential vaccine being developed by Moderna, a biotechnology firm in the Boston suburbs.

Azar added that he was especially concerned with the spread of the coronavirus in Iran and Italy. How the disease migrated there is unclear, which makes that development especially troubling.

As for Trump, he tweeted once about the coronavirus on Tuesday, calling Senate Minority Leader Chuck Schumer “incompetent.” Schumer had criticized the $2.5 billion request as too low. After that, Trump turned back to tweeting about his visit to India, and what he deemed to be a “total miscarriage of justice” in the case of former ally Roger Stone.