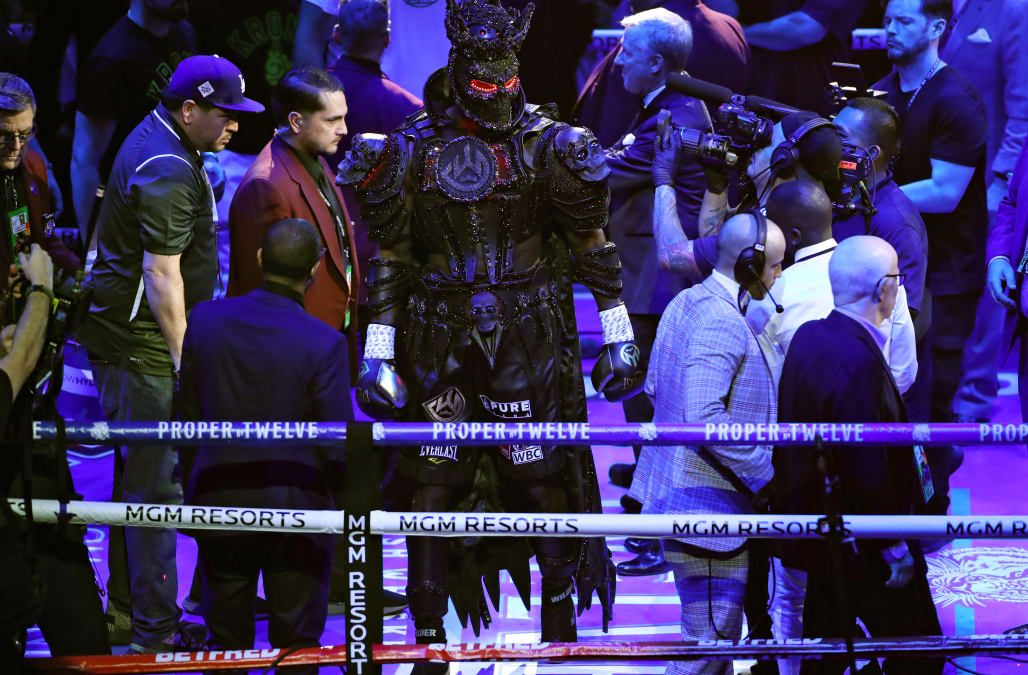 LAS VEGAS — Deontay Wilder wanted to make his ring walk prior to his fight with Tyson Fury on Saturday special and wore a 40-pound costume as a tribute to Black History Month. But Wilder said the costume was too heavy and was the reason that he didn’t have his legs under him in his seventh-round TKO loss to Fury.

He said he will go to Africa at the end of March on vacation and plans to exercise his rematch clause for a third fight with Fury. He said he’ll get back to boxing once he returns from Africa.

Wilder also said he is upset with assistant trainer Mark Breland for throwing in the towel to stop the fight and suggested that Breland will no longer be part of the team on fight night. He said he was displeased with the work of referee Kenny Bayless, who took a point from Fury in the fifth round, and went out of his way to congratulate Fury on his performance. 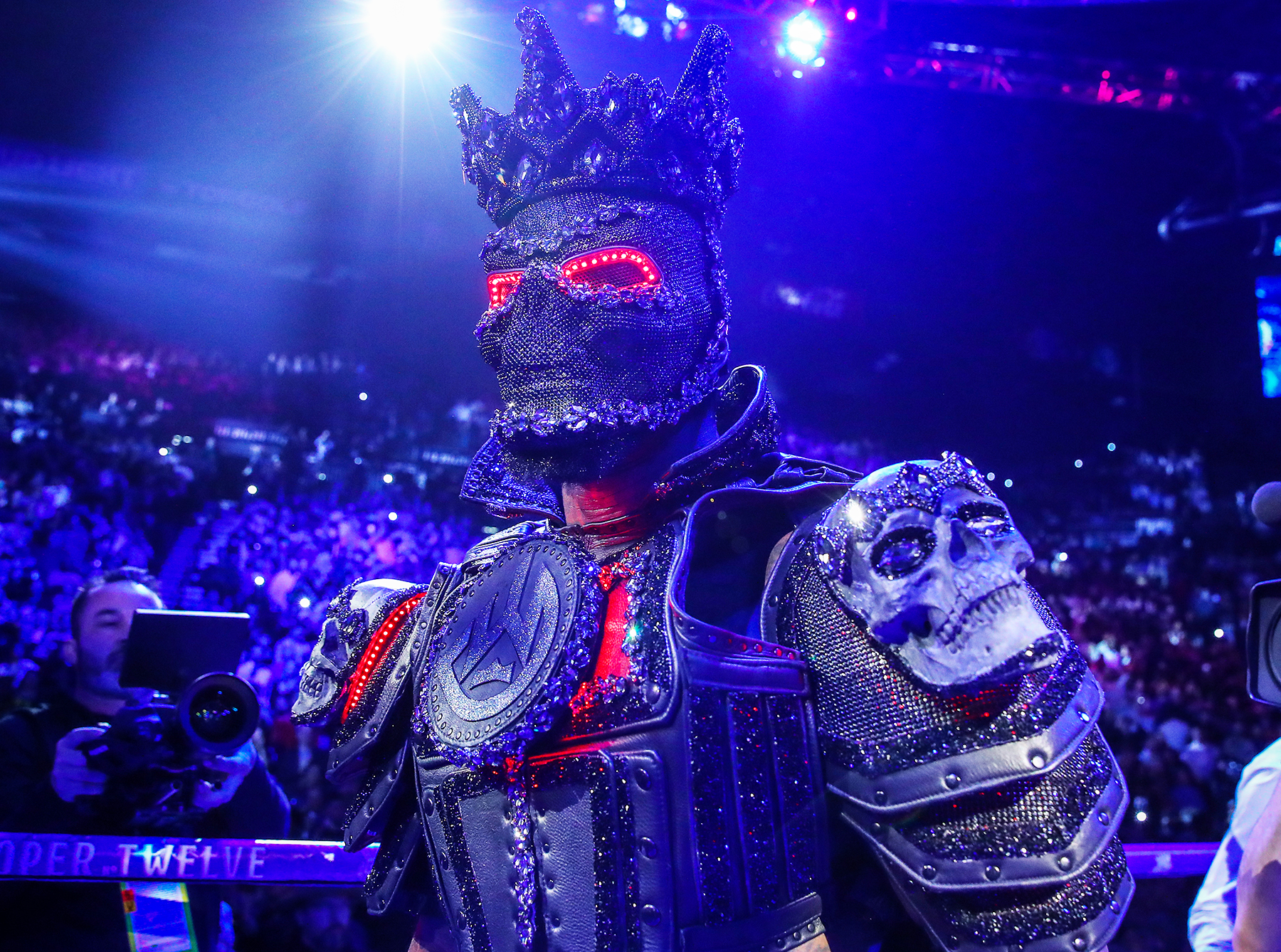 Wilder was knocked down in the third round of the heavyweight title fight by a straight right hand and then again in the fifth with a left hook to the body. His balance seemed off for much of the fight, and he slipped several times and went down two times in addition to the official knockdowns.

He said he wasn’t hurt by the punches and wanted the chance to continue. As Yahoo Sports reported on Sunday, he did not suffer a concussion, a broken ear drum or a broken jaw. The only physical injury he had was a two-centimeter cut that was closed with seven stitches.

Just got some information, Wilder did not have a broken jaw as some have speculated, nor did he have a broken ear drum. He had a 2 centimeter cut in his ear that took seven stitches to close.

Wilder said the reason he went with the outfit he did was to create a memorable night of entertainment for his fans, but it backfired on him.

“He didn’t hurt me at all, but the simple fact is ... that my uniform was way too heavy for me,” Wilder told Yahoo Sports by telephone. “I didn’t have no legs from the beginning of the fight. In the third round, my legs were just shot all the way through. But I’m a warrior and people know that I’m a warrior. It could easily be told that I didn’t have legs or anything. A lot of people were telling me, ‘It looked like something was wrong with you.’ Something was, but when you’re in the ring, you have to bluff a lot of things. I tried my best to do so. I knew I didn’t have the legs because of my uniform.

“I was only able to put it on [for the first time] the night before, but I didn’t think it was going to be that heavy. It weighed 40, 40-some pounds with the helmet and all the batteries. I wanted my tribute to be great for Black History Month. I wanted it to be good and I guess I put that before anything.”

Wilder upset at trainer for throwing in the towel

Wilder was unhappy that Breland stopped the fight. His head trainer, Jay Deas, had criticized Breland at the post-fight news conference, which Wilder did not attend, for throwing in the towel. Wilder said he had spoken to members of his team long before and said he never wanted them to stop a fight.

Wilder has frequently said in the past that he wants a body on his record and said he’d emphasized to his team, including Breland, many times that they were never to stop a bout.

He said he still loved Breland, and that they planned to have a discussion with him about whether he would be part of the team going forward.

“I am upset with Mark for the simple fact that we’ve talked about this many times and it’s not emotional,” Wilder said. “It is not an emotional thing, it’s a principal thing. We’ve talked about this situation many, many years before this even happened. I said as a warrior, as a champion, as a leader, as a ruler, I want to go out on my shield. If I’m talking about going in and killing a man, I respect the same way. I abide by the same principal of receiving.

“So I told my team to never, ever, no matter what it may look like, to never throw the towel in with me because I’m a special kind. I still had five rounds left. No matter what it looked like, I was still in the fight.”

When Yahoo Sports said Breland was looking out for his best interest, Wilder said he got that, but it didn’t matter.

“I understand he was looking out for me and trying to do what he felt was right, but this is my life and my career and he has to accept my wishes,” Wilder said.

Wilder also went in on Bayless, who long has been considered among the elite referees in the game. He said Bayless had told him before the fight in the locker room that he could be disqualified for a number of different violations, many of which he said Fury wound up doing to him.

Bayless took a point from Fury in the fifth, but that did not placate Wilder, who was well behind at that point.

“The referee told me specifically that if I hit him in the back of the head or hit him on the break, he’d disqualify me,” Wilder said. “But I guess that was only directed toward me, because he allowed Fury to do those things. That’s the one thing that bothered me of everything.”

Wilder, though, made a specific point to praise Fury. He said he respects Fury tremendously, looks forward to fighting him again and that Fury deserved recognition for a brilliant performance.

“I’m super happy for Tyson Fury and I really want to give him my complete congratulations,” Wilder said. “He’s had a lot of great accomplishments in his career and this is right there with all of them. I’m very excited about his career and what he has done. He deserves a lot of credit.”