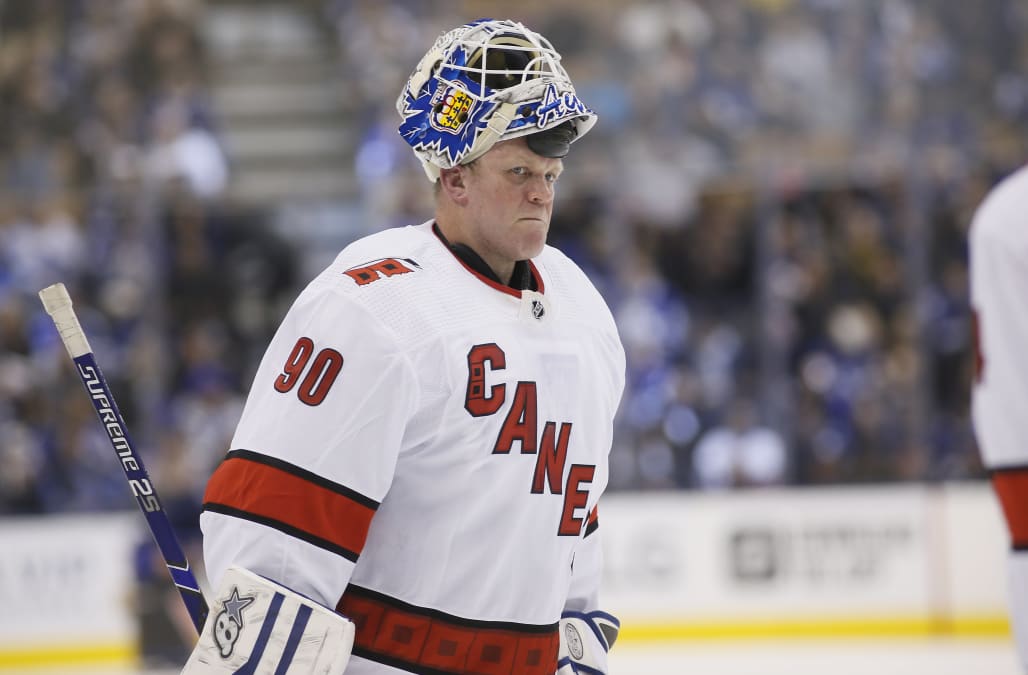 David Ayres figured his days of playing competitive hockey were over 15 years ago when he underwent a kidney transplant.

It turned out he had one more big game to play, and it would be in front of more than 18,000 people. Ayres told TODAY Monday that he initially thought it was a joke when he was told to suit up and play emergency goalie for the Carolina Hurricanes against the host Toronto Maple Leafs on Saturday night after the team's starting and back-up goalies had gotten injured.

"Actually I did think it was a prank,'' the 42-year-old father of three said. "When the guy first came into the room he said, 'Get your stuff on, we're going out on the ice,' I said, 'Are you serious?'

"I was confident until I hit the ice, and then I got terrified. I just wanted to make sure I got on the ice and didn't fall down."

The NHL has a rule mandating that teams have an emergency goalie in attendance for home games who is available for both teams to use.

Ayres is normally the director of operations at the Mattamy Athletic Centre, a local arena in Toronto, where one of his duties is driving the Zamboni on the ice rink. But on Saturday night, he came to the rescue for the Hurricanes.

By the end of the game, the crowd was in a frenzy, even though it was the Maple Leafs' home ice. Ayres shut Toronto out in the third period and help wrap a 6-3 win for the Hurricanes.

RELATED: Take a look at Stanley Cup championships throughout the years:

(Photo by B Bennett/Getty Images)

"The first two shots went in, and that wasn't good for me,'' he said. "It kind of killed the confidence for a second. I had to regroup.

"One of the players came down to me, and he said, 'Just relax, this is gonna be fun for you, have a good time with it. We don't care how many goals you let in, and let's just have fun.'''

His night ended with a standing ovation from the Toronto crowd.

"That was cool,'' he said. "After the game was over I kinda got off the ice and I was thinking to myself, 'Alright, I made it through that.' When I stepped back on the ice, most of the crowd was still there and they were really cheering, so that was pretty cool."

Ayres then got showered with water by his Hurricanes teammates upon entering the locker room.

"I had no idea that was coming,'' he said. "Next thing you know I'm having the shower before I even get in the shower."

Not only did he have a blast, he also made a piece of history, becoming the oldest goalie in NHL history to win his regular-season debut at 42 years and 194 days. He was paid $500 for his efforts, and he said his stick has been sent to the Hockey Hall of Fame in Toronto.

Making it even more remarkable is that he had a kidney transplant when he was 27.

"When I first got it, I thought I'm done playing hockey at all," he said.

The donor was his mother, Mary, who surprised him on TODAY Monday with a phone call that left him in tears.

"I was always very proud of you from the beginning, and this has just made me so extremely proud," she. "I have no words. I couldn't sleep for the first night. It's amazing."

The Hurricanes immediately started selling No. 90 Ayres jerseys after the game. The proceeds will go to benefit a kidney foundation in North Carolina, Ayres said.

Ayres became just the third emergency goalie to ever play in an NHL game in the modern era and the first since accountant Scott Foster was pressed into service for 14-minute stretch with the Chicago Blackhawks in 2018. Ayres said Foster text messaged him on Sunday congratulating him on his performance.