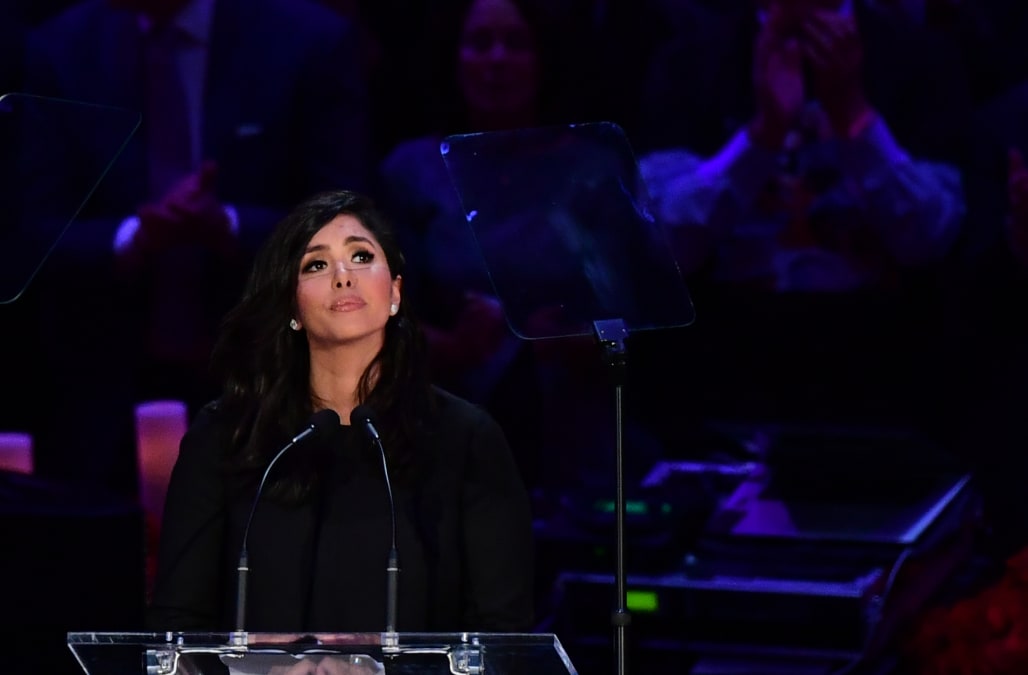 Vanessa Bryant delivered a moving 22-minute remembrance of her late husband and daughter at the open of Monday’s memorial for Kobe and Gianna Bryant at Staples Center.

Vanessa took the stage as the first speaker, after Beyonce delivered a moving performance to the Bryant family, and shared fond memories of the two larger-than-life personalities.

She gave stories of Gianna, affectionately known as “Gigi” kissing her every morning and night, and Kobe, her “boo boo,” finding time for gifts both handmade and emotional. She said he gave her the actual notebook and dress from “The Notebook,” hoping they would grow old together and watch their daughters have families of their own.

The memories she shared of her two loves were intertwined, reminiscent of the other and heavy with similarity.

“God knew they couldn’t be on this earth without each other. He had to bring them home to have them together,” Vanessa said to close her remarks.

“Babe, you take care of our Gigi. And I’ve got Nana [Natalia], BB [Bianca] and Coco [Capri]. We’re still the best team.

“We love and miss you, Boo boo and Gigi. May you both rest in peace and have fun in heaven until we meet again one day. We love you both and miss you. Forever and always. Mommy.”

Kobe was ‘my soulmate, my everything’

Vanessa began by thanking everyone for the love and support toward her family. Her oldest daughter, Natalia, turned 17 the week before the accident. Bianca is 3 and Capri is eight months.

Vanessa and Kobe were together for 20 years — adding more meaning to a memorial on 2/24/20, which was set for the jersey numbers. Vanessa said she was “his first girlfriend, his first love, his wife, his best friend, his confidant and his protector.”

“I was fire and he was ice, and vice versa at times. We balanced each other out. He would do anything for me. I have no idea how I deserved a man who loved and wanted me more than Kobe.”

Kobe sent her a text weeks before he died, she said, that asked if they could take some time together soon. They were never able, but she said she’s grateful to have the text now. During his playing days he would look up in the stands to make sure she had arrived to the arena safely during Los Angeles Lakers games, she said, and when she was running late he’d become worried.

“My smart a— would tell him he wasn’t going to drop 81 points within the first 10 minutes of the game,” Vanessa said.

Vanessa said Kobe was the romantic one in the relationship, hand making treasured gifts and giving her the dress Rachel McAdams wore in “The Notebook.”

“He said it was because the scene when Allie comes back to Noah. We had hoped to grow old together like the movie. We really had an amazing love story.”

“He would have been the coolest grandpa. Kobe was the MVP of girl dads. Or, MVD.”

Family came first, Vanessa said, and he took pride in his daughters’ passions. When he retired, Kobe took over the school drop-off and pick-up for the older two girls. He was able to spend extra time with Gianna, who loved the game of basketball the way he did, and hoped to pass that on to the younger two girls. He said Natalia, a volleyball player, would have made a great point guard. Vanessa said he wanted them to renew their vows and for their oldest to take over the company so they could travel the world.

Gigi was competitive with sweet grace

Vanessa began by sharing memories of Gigi, who was 13. Gigi began making headlines in recent years for her basketball talents and skill. But she was far more than a basketball player. She was an “amazingly sweet and gentle soul,” Vanessa said, who made sure to kiss her mother good morning and good night every day.

“She had swag and rhythm since she was a baby,” Vanessa said.

She loved to bake, making “the best chocolate chip cookies” and designing a fancy cake for her father’s birthday last August. She loved to put a smile on everyone’s face and valued family time, Vanessa said.

“Gigi was sunshine. She brightened up my day, every day. I miss looking at her beautiful face.”

Her non-athletic talents included reading, speaking and writing Mandarin. She never tried to conform and was always inviting, Vanessa said. With mom, she watched cooking shows. With dad, she watched the “Survivor” and the NBA. And while she was her father’s daughter, she was also her own person.

“Gigi was very competitive like her daddy, but Gianna had a sweet grace about her. Her smile was like sunshine. Her smile took up her entire face, like me.”

Vanessa, who began her remarks with a quiet “OK” to steady herself in the center of nearly 100,000 at Staples Center, became emotional at the end of her remarks to Gianna when thinking about the life moments they won’t have.

“We will not be able to see Gigi go to high school with Natalia and ask her how her day went. We didn’t get the chance to teach her how to drive a car. I won’t be able to tell her how gorgeous she looks on her wedding day. I’ll never get to see my baby girl walk down the aisle, have a father daughter dance with her daddy, dance on the dance floor with me or have babies of her own.”

Gigi would have been best player in WNBA

Gigi, who was coached by her dad at the Mamba Academy, had a dream of playing for the Connecticut Huskies in college before going on to a professional career. The league’s all-time leading scorer, Diana Taurasi, noted last month the impact that would have had on the women’s game.

“Gigi would have most likely become the best player in the WNBA. She would have made a huge difference for women’s basketball. Gigi was motivated to change the way everyone viewed women in sports. She wrote papers in school defending women and how the pay difference between the WNBA and NBA leagues wasn’t fair.

“And I truly believe she made positive changes for the women in the WNBA now.”

The women’s game was a key component of the memorial Monday, with Taurasi speaking to her relationship with Kobe. The Los Angeles Lakers legend called her the “White Mamba.” Sabrina Ionescu, who counted Kobe as her mentor, spoke of meeting the family and spending time with Gianna. And UConn coach Geno Auriemma, who may have coached the budding star in a few years, shared stories of Kobe as a person, basketball to the side.