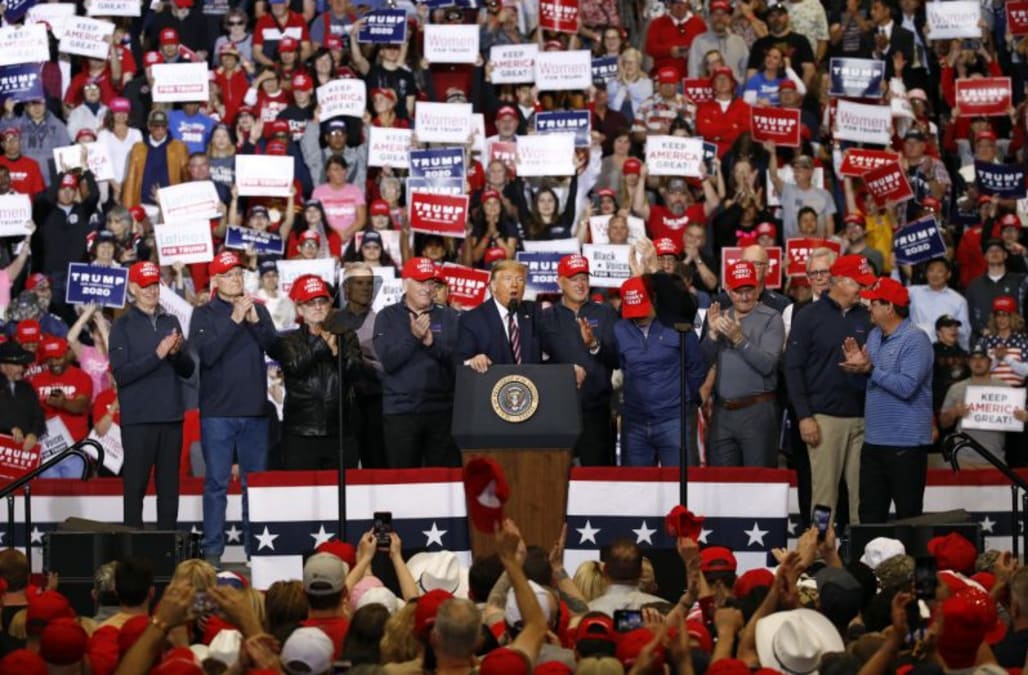 The famous 1980 Miracle on Ice hockey team, which defeated the Soviets on its way to a surprise gold medal at the Lake Placid Olympics, is under fire after appearing at a rally for President Donald Trump.

Many members of the team were in Las Vegas over the weekend to celebrate the 40th anniversary of their shocking upset of the Soviet Union and attended a campaign rally Trump was holding the night before the Nevada Democratic caucus. But they didn’t just attend — they appeared on stage, with every present team member wearing a red “Keep America Great” hat.

The person responsible for that tweet may not have realized how it was going to play. Juxtaposing a famous quote about unity with photos of the players in hats supporting the most divisive president in recent memory didn’t go over well with many fans.

They made it about politics by showing up at a campaign rally. Don't like the blow back, how about thinking before doing something stupid. All respect is now gone.

If it’s not about politics or choosing sides, why are you wearing MAGA hats? So disappointing.

It was about politics when you put on those hats.

The blowback from the team’s appearance at the rally, and the subsequent tweet, was intense enough that the team’s Twitter account posted a follow-up tweet that attempted to defend its choice to appear at the rally.

To us, this is not about politics or choosing sides. This is about proudly representing the United States of America. Whether your beliefs are Democratic, Republican, Independent, etc. we support that and are proud to represent the USA. It is an honor and privilege! 🏒🏅🇺🇸

Not surprisingly, that one didn’t go over well either.

You guys just tarnished an incredible legacy that stood the test of time for 40 years:

Representing all of us, for America.

The team was great.
The game was legendary.
The people on the team betrayed America in 2020.

You chose red hats instead of red, white and blue.

Wrong. Wrong take. That was a campaign rally. This is truly sad.

And the red MAGA hat is considered a symbol of racism and division by a huge portion of the country.

So, it's both "political" and "choosing sides"

The team dropped the puck at the Saturday game between the Vegas Golden Knights and Florida Panthers. That time, they left their MAGA hats at home.