Sanders solidifies himself as frontrunner in Nevada and beyond, new polls show 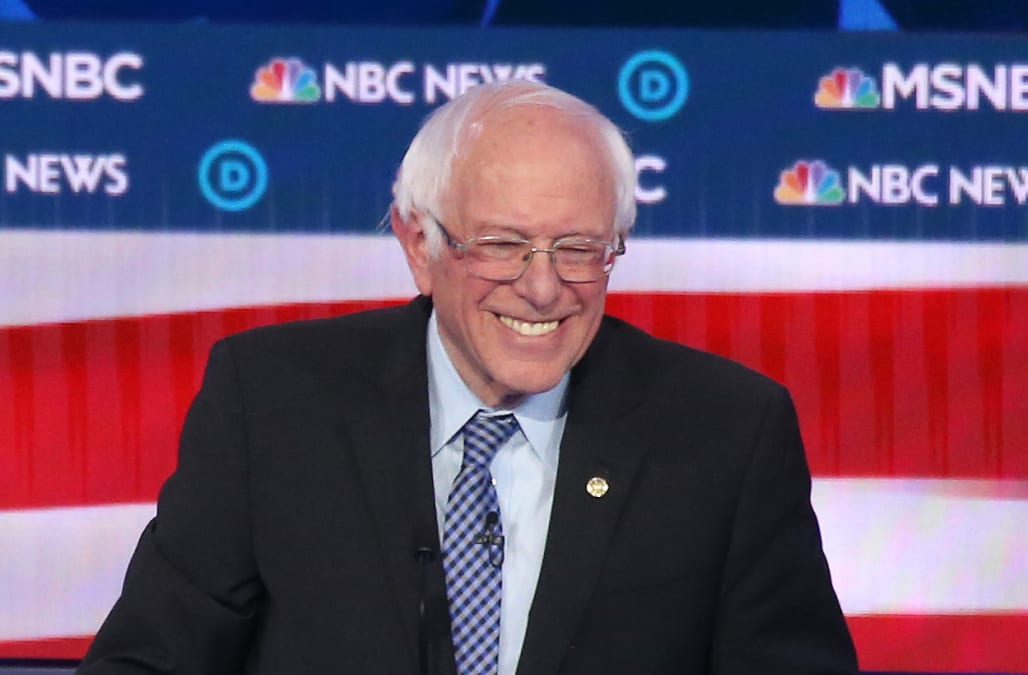 Welcome to 2020 Vision, the Yahoo News column covering the presidential race. The Nevada caucuses are one day away — and there are 256 days until the 2020 presidential election.

On the eve of the Nevada caucuses, polls show Sen. Bernie Sanders with a comfortable lead in the Battle Born State, while national surveys have Sanders opening up a double-digit advantage over his closest rivals — a group that includes billionaire former New York City mayor Mike Bloomberg.

Note that Bloomberg is not on the ballot in Nevada. And the figures below do not show candidates who polled at 1 percent or less.

Looking ahead to South Carolina — a critical state for Biden's chances of a comeback — recent surveys show the former vice president maintaining only a slight lead over Sanders, who is closing the gap. And one poll, conducted by Change Research for the Democratic group The Welcome Party, shows Biden and Sanders now tied at 23 percent.

“Flames seem to be licking through the cracks in Biden’s firewall," noted Winthrop Poll Director Scott Huffmon. "His support has dropped by double digits since late September. Without a strong showing in South Carolina, Biden’s campaign will be limping into Super Tuesday."

And three national polls released this week show Sanders continuing to solidify his frontrunner status after a victory in the New Hampshire primary. They also suggest Bloomberg’s media saturation ad strategy is working, with the late-to-the-party billionaire blitzing past Biden, Pete Buttigieg and Sen. Amy Klobuchar. And one poll out of Florida shows Bloomberg on top in the Sunshine State.

All of these surveys, however, were conducted before Wednesday’s debate in Las Vegas, where Bloomberg was pummeled by Elizabeth Warren and the rest of the field for his use of non-disclosure agreements as a business owner, his defense of stop-and-frisk policing as mayor and more.

Despite Sanders's strong polling, the analytics site 538 currently gives the Vermont senator and self-described democratic socialist just a 35 percent chance of securing enough delegates to win the nomination on the first ballot at this summer's Democratic National Convention in Milwaukee.

The Nevada caucuses are set for Saturday, which in previous election cycles would mean we could expect results on, well, Saturday. In 2020? There are no such guarantees.

The first primary contest of this cycle was a mess for Democrats, as the Iowa caucuses were unable to report results on the night voters gathered, leading to an immediate questioning of their legitimacy by the Biden campaign. Matters didn’t improve the next day, when the Iowa Democratic Party and Democratic National Committee drew fire from Sanders supporters when they released a seemingly arbitrary 62 percent of the results that showed Buttgieg with a lead in delegates.

That margin decreased as more results came in until DNC chief Tom Perez called for a recanvass with 97 percent of the results in and Sanders seemingly set to take the lead. Nearly three weeks later, we still don’t know the exact results, but as of Feb. 21 Sanders has a lead in the popular vote while the delegate count is essentially a tie.

The Hawkeye State debacle gave warning to Nevada Democrats, who ditched an app developed by the same company that created Iowa’s faulty reporting system and replaced it with 2,000 iPads equipped with Cisco Systems security software. They have also lowered expectations about whether or not we’ll know the results on Saturday.

“We’re going to do our best to release results as soon as possible, but our North Star, again, is accuracy,” said Perez on Tuesday.

“We understand just how important it is that we get this right and protect the integrity of Nevadans’ votes,” Shelby Wiltz, caucus director of the Nevada state Democratic Party, said in a statement this week.

Adding to the potential problems for Saturday is that this is the first year Nevada has allowed early voting, and there’s been a ton of it: An estimated 70,000 Democrats have already logged their preference, nearly as many as the 84,000 that caucused in 2016. Precincts will have to record everyone’s initial preference, eliminate candidates that don’t reach the viability threshold and then count again after realignment.

If the Nevada results aren’t reported in a timely fashion, that will only serve as further fuel in the push to eliminate caucuses entirely.

As was the case in the days leading up to Iowa and New Hampshire, President Trump was in Nevada this week counterprogramming the Democratic caucuses, using his hotel on the Strip as a home base of sorts while attending fundraisers in California and holding rallies in Colorado and Las Vegas.

On Thursday night, Trump held a rally in Colorado Springs, where he took a respite from his usual targets (Democrats, the deep state, Joe and Hunter Biden, James Comey et al.) to mock "Parasite," the Best Picture winner at the Oscars earlier this month.

“How bad were the Academy Awards this year?” the president asked, prompting jeers from the crowd. “Did you see it? The winner is ... a movie from South Korea! What the hell was that all about? We got enough problems with South Korea with trade. On top of that, they give them best movie of the year? Was it good? I don’t know. Let’s get ‘Gone With the Wind.’ Can we get ‘Gone With the Wind’ back, please?”

Directed by Bong Joon-ho, "Parasite" was the first foreign-language film ever to win Best Picture. And the studio behind the film was quick to bite back.

But the "Parasite" win wasn't the only part of the Oscars to irk the president. Trump also took aim at Brad Pitt, who used his acceptance speech for Best Supporting Actor to call out Senate Republicans for blocking the testimony of former national security adviser John Bolton.

Trump added that he was “never a fan” of Pitt's, adding the actor to a long list of people and things of which the president is not a "fan." Among them: Samuel L. Jackson, Bill Cosby, George W. Bush, Jeff Flake, Bitcoin, tattoos and, of course, sharks.

Sorry folks, I'm just not a fan of sharks - and don't worry, they will be around long after we are gone.

“We knew that we were going to come in and the cannons were loaded for bear. He was everyone’s target. I think he weathered the storm.”

“I’ve had it with billionaires who think their money buys them something special, so they can call women ‘fat broads’ and ‘horse-faced lesbians’ and, when someone complains about it, throw a little money on it and put a gag in the woman’s mouth. That’s not right — and that’s not going to be our candidate for president.”

— Sen. Elizabeth Warren, in Las Vegas Thursday, continuing to attack Michael Bloomberg a day after she pummeled him in the debate

“It sounded like he was running in the wrong primary.”

— Tom Steyer, who did not qualify for Wednesday’s debate, on CNN assessing Bloomberg’s performance

“I’m actually, I guess, the chief law enforcement officer of the country.”

— President Trump to reporters on Tuesday reiterating the claim that he has the right to intervene in federal court cases, including the one involving his longtime ally, Roger Stone