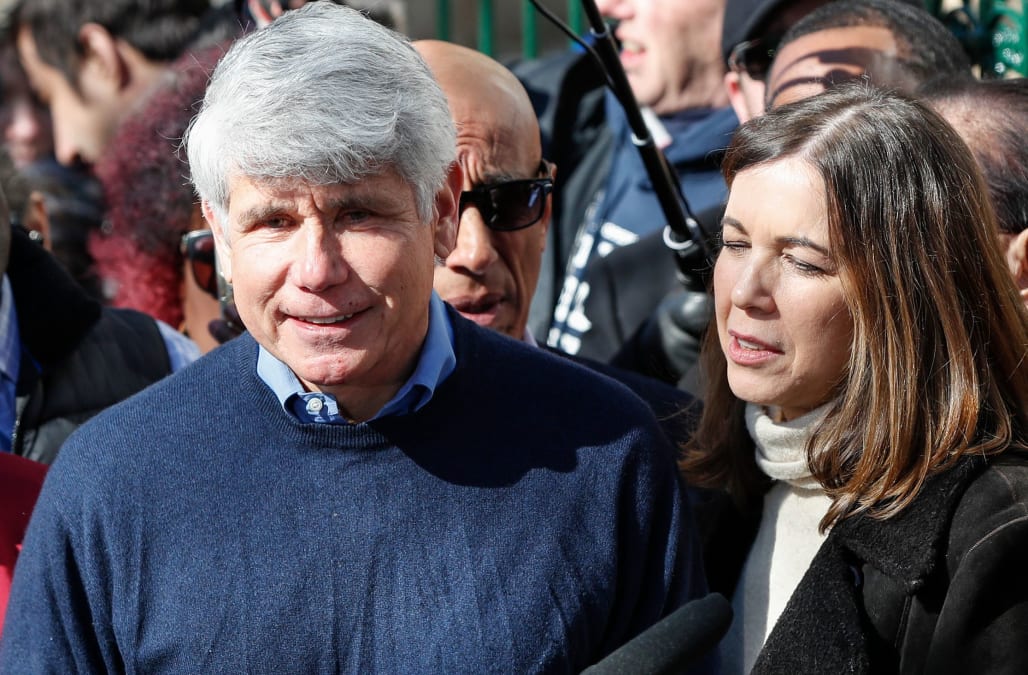 A day after Rod Blagojevich's prison sentence was commuted by President Donald Trump, the former Illinois governor portrayed himself outside of his Chicago home on Wednesday as "a freed political prisoner" who'd been unfairly persecuted.

"I'm returning home today from a long exile as a freed political prisoner," a defiant Blagojevich told reporters and supporters. "From beginning to end this was persecution masquerading as prosecution".

As he spoke, Blagojevich repeatedly dabbed blood off of his chin.

"Sorry about the blood," he told the assembled crowd. "Long time since I've shaved with a normal razor."

Trump commuted Blagojevich's sentence on Tuesday, after the former Illinois governor had served 8 years of his 14-year prison sentence. He was released from the low-security Federal Correctional Institute in Englewood, Colorado, Tuesday night.

Trump told reporters Blagojevich — who was convicted in 2009 of lying to the FBI, trying to shake down a children's hospital and a racetrack and trying "sell" the Senate seat that was left open when former President Barack Obama was elected in 2008 —had received "a tremendously powerful, ridiculous sentence."

Blagojevich maintained he didn't do anything wrong. "I didn't let you down. I would have let you down if I gave in to this," he said, repeatedly offering praise and thanks to the president. "He's not a typical politician. He's a problem solver," Blagojevich said. "He sees wrong and tries to right it."

Trump defended Blagojevich as he spoke, tweeting that, "Rod Blagojevich did not sell the Senate seat. He served 8 years in prison, with many remaining. He paid a big price."

The scene outside Blagojevich's Chicago house took on an almost carnival-like atmosphere at times before the disgraced former politician emerged to greet the cameras, with some cheering supporters carrying old Blagojevich campaign signs, a balloon heart and one even wearing a rubber mask of his face.

Blagojevich hugged and shook hands with a number of supporters. "How about those Cubs?" he asked one.

Blagojevich, who Trump fired from his reality TV show "The Celebrity Apprentice" in 2010 after he messed up a "Harry Potter" presentation, told reporters at Denver International Airport after his release he was "profoundly grateful" to the president for springing him.

"He didn't have to do this. He’s a Republican president; I was a Democratic governor," Blagojevich said. Trump's "got obviously a big fan in me."

"And if you’re asking me what my party affiliation is, I’m a Trump-ocrat," he added.

Blagojevich's wife, Patti, had repeatedly gone on Fox News pleading for the president to show mercy for her husband, who she said was the victim of a "witch hunt" that was orchestrated by "the Obama Justice Department" and former FBI directors — and Trump targets — Robert Mueller and James Comey.

Comey was in private practice at the time of Blagojevich's arrest, but her appeal appeared to stick with Trump. In his tweet Wednesday, Trump referred to the case as "Another Comey and gang deal!"

Trump had been publicly mulling taking action in Blagojevich's case for months. He told reporters on Air Force One in August that "I am thinking about commuting his sentence. He’s been in jail for seven years, over a phone call where nothing happens."

Those comments came after what Trump has described in his own "perfect" phone call with Ukraine's president that led to his impeachment but before news of that call became public.

Trump was referring in August to wiretapped conversations where Blagojevich was talking about Obama's Senate seat. "It's a f------ valuable thing," the Democratic then-governor was heard saying in a recording of a phone call played in court. "You just don't give it away for nothing."