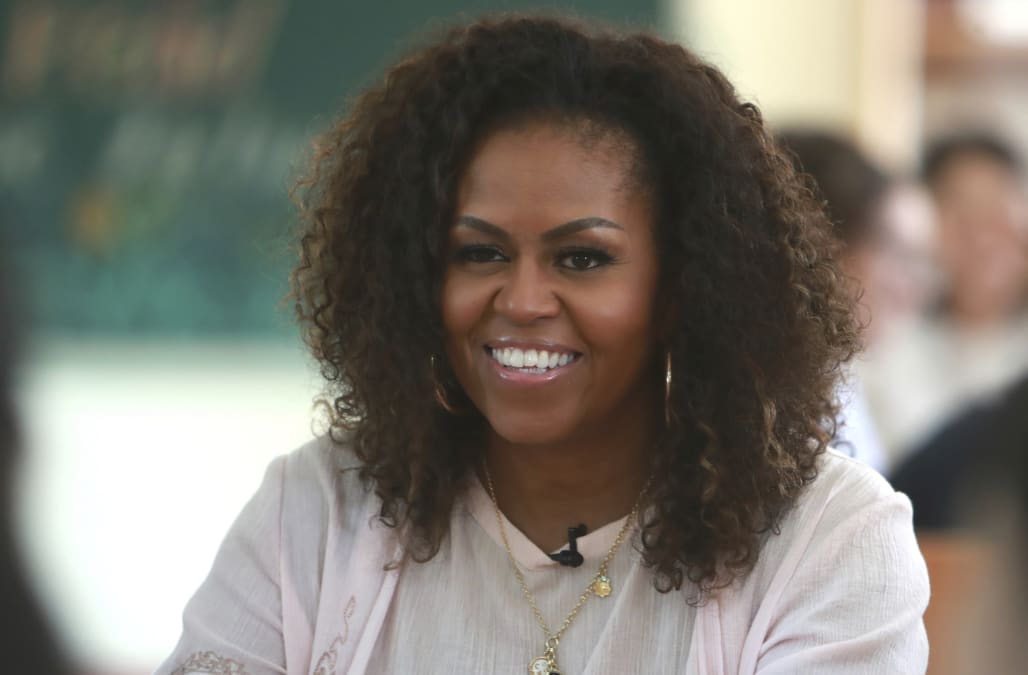 Michelle Obama’s getting more use out of her prom dress.

The former first lady posted a throwback to her 1982 prom night on Tuesday, sharing a snap of her younger self wearing a pink satin polka-dotted gown and seated beside her then-boyfriend David.

Obama’s post kicks off the Prom Challenge initiative, which encourages schools to create new and inspiring ways to register students to vote.

The challenge was established by MTV’s +1thevote campaign and When We All Vote, a group Obama co-chairs that aims to increase election participation for people of all ages and races.

Throwing it back to my 1982 prom night and this pink satin, polka-dotted dress. If you're a student or teacher, join the #PromChallenge with @WhenWeAllVote and @MTV and tell us what your school is doing to register students to vote -- you could get a free prom for your school! Learn more at prom.mtv.com. You can also help me spread the word by posting your prom photo with #PromChallenge.

Obama encouraged students and teachers to join the challenge by submitting innovative ways their schools are encouraging voter registration. The 20 high schools with the most creative initiatives will win up to $5,000 toward their proms.

The former first lady also invited others to spread the word and share their own prom throwbacks. Celebrities including Kerry Washington and Tracee Ellis Ross have already voiced their support.

18 yr old me in ‘90 ready for prom in this @armani dress, bangles & shoes. Prom was fun, but my 1st time voting was life changing.⁣ If you're a student or teacher, join @WhenWeAllVote & @MTV’s #PromChallenge & u could win a free prom for your school!⁣
⁣https://t.co/DalCN0ha9Kpic.twitter.com/YoOAYDBFJO

It’s not Thursday but I’m throwin’ it back…to prom! Well, one of em. I went to a few🤣😂 #PromChallenge (I 👀 you @MichelleObama!)@WhenWeAllVote & @MTV are registering students to vote and they might just help YOU throw an unforgettable prom. Sign up👉🏾 https://t.co/BCA9MRa1TL! pic.twitter.com/yXviAjFpBr

Prom is unforgettable but so is voting in your first election.
Join ​@WhenWeAllVote​ and ​@MTV ​to help​ ​classmates get registered to vote and they might help you throw your school an unforgettable prom.
Sign up your school for the ​#PromChallenge​ at ​https://t.co/lRzMfVWmIxpic.twitter.com/m4TvnQYffw

.@WhenWeAllVote and @MTV are challenging students and teachers to find the most creative ways to help register voters at your school.
Interested? You can receive up to $5,000 for an epic prom 🕺🏽🎉
Show me what you got and sign up for the #PromChallenge: https://t.co/TznYrKzlXqpic.twitter.com/UvjpzQ2srj

What a great cause. #PromChallenge@WhenWeAllVote@MTV

Since we’re looking back, this is my prom dress, 1975.#grounded#WorthIthttps://t.co/4z0CPcJfVspic.twitter.com/r5mkGBhtzW

1986 Prom with David Miercort in Dallas! #PromChallenge ⁣
⁣@WhenWeAllVote and @MTV want to hear from teachers and students to know how your school is registering people to vote, and one school will win a free prom! https://t.co/jAl4P3N3a2⁣

Did I rock a Gummi Bear Corsage for my prom? You’re damn right I did.

Join the #PromChallenge with @WhenWeAllVote and @MTV and tell us what your school is doing to register students to vote. You could get a free prom for your school! Learn more: https://t.co/zjee3AAH79pic.twitter.com/yYtieMyiCh

Tom Hanks, another of the co-chairs of When We All Vote, tweeted in support of the campaign — but disappointingly, has not yet shared his own prom throwback.

You in High School? Want to Vote in Novemeber? Register! Check out how! Hanx #WhenWeAllVote#PromChallenge