Bloomberg and Obama: A more 'complicated' relationship than the ads suggest 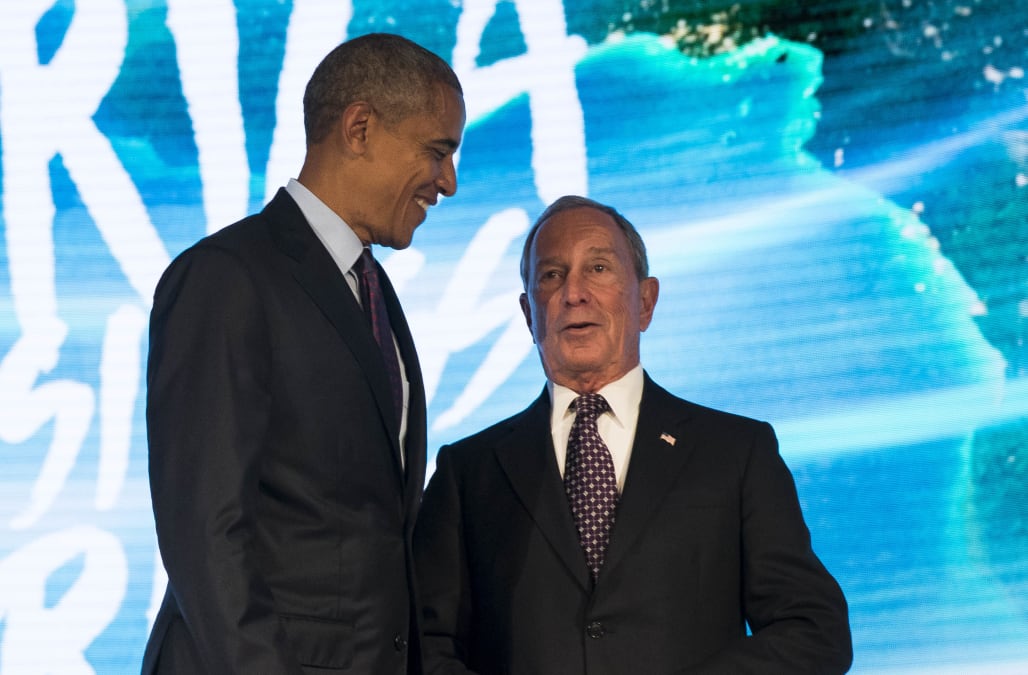 WASHINGTON — Mike Bloomberg is touting his relationship with Barack Obama in a pair of new TV ads backed by $16 million so far. If you didn't know better, the spots might lead you to believe the former president had endorsed the former mayor of New York.

He has not, as several Obama alumni have been quick to point out. And the vision the ads conjure up of a close partnership between "a great president and an effective mayor" leaves out the repeated criticism on a variety of issues that Bloomberg has leveled at Obama.

The billionaire New Yorker has long coveted the White House himself and is prone to bashing what he sees as Washington dysfunction, often armchair quarterbacking what he saw as the failures of leadership by Obama.

Obama is the most popular figure in the Democratic Party. And all of the candidates, especially his former vice president, Joe Biden, have sought to align themselves with him, even as he has remained aloof and declined to endorse anyone.

But Bloomberg's ads go further than some rivals' spots, opening with a clip of Obama praising Bloomberg and unfolding with images of the two men together in a way that has led some viewers to assume a deeper connection.

"The power of saturation advertising. Someone at my gym in California asked me why Barack Obama chose Bloomberg over the rest of the field," Obama's former campaign manager David Plouffe tweeted.

But Bloomberg did not endorse Obama during his first run for the White House in 2008. Obama, in turn, did not back Bloomberg during his final mayoral run in 2009. And Bloomberg waited until the last week of the 2012 presidential race to back Obama's re-election over Republican Mitt Romney, and his op-ed doing so included as much criticism as it did praise.

"It's jarring to see all these Bloomberg ads that suggest Obama has endorsed him, especially considering how ... perfunctory his endorsement of Obama was back in 2012," tweeted Tommy Vietor, a national security spokesman in the Obama White House.

Jon Favreau, Obama's former top speechwriter, who co-hosts the popular podcast "Pod Save America" with Vietor, replied, "I'm old enough to remember being fairly annoyed by it when the endorsement was published."

Other former Obama aides are working for Bloomberg (and on many other campaigns), and some top Obama donors and outside allies have sided with the former mayor, as well.

But Dan Pfeiffer, a White House spokesman in the Obama administration, said Tuesday on MSNBC that Bloomberg's ads "tell a story that is belied by the reality of that relationship that I think is somewhat complicated."

Bloomberg, who was a Republican until he switched to become an independent in 2007, dismissed both Obama and his Republican opponent in 2008, the late Sen. John McCain of Arizona, to Joyce Purnick for her book "Mike Bloomberg: Money, Power, Politics."

"What the hell do they know about management and dealing with people? Nothing," Bloomberg is quoted as having said.

Once Obama was in office, the mayor helped lobby undecided senators, including Republican Susan Collins of Maine, on health care reform, but he ended up with a dim view of the Affordable Care Act after it passed, calling it a "disgrace."

In a speech to the Securities Industry and Financial Markets Association in 2014, Bloomberg dismissed both the Affordable Care Act and another major Obama legislative accomplishment, the Dodd–Frank Wall Street Reform and Consumer Protection Act.

After Republicans won back control of Congress in 2010, the rest of Obama's first term was marked by a series of budget and debt standoffs that Democrats likened to a hostage crisis, with Republicans threatening to blow up the economy and faith in U.S. credit if their demands were not met.

Bloomberg, however, blamed "both sides of the aisle and both ends of Pennsylvania Avenue." He dinged Obama for the collapse of the so-called budget supercommittee, which was meant to pave a bipartisan way out of the crisis, saying: "It's the chief executive's job to bring people together and to provide leadership in difficult situations. I don't see that happening."

Later, when the Obama Justice Department's Civil Rights Division agreed to appoint a monitor to oversee the New York Police Department's "stop-and-frisk" policy, Bloomberg fired back at Washington, saying, "It just makes no sense whatsoever, when lives are on the line, to try to change the rules and hamper the police department from doing their job."

In the runup to the 2012 election, Bloomberg also downplayed Obama's role in the killing of Osama bin Laden, a key election-year issue for the president, suggesting in an interview with The Atlantic that any president would have made the same move.

Bloomberg, then the mayor of the nation's largest city, sat on the sidelines until six days before the election, when he wrote an op-ed backing Obama over Romney, praising his administration's handling of Hurricane Sandy, which hit the New York area.

But Bloomberg also criticized Obama for failing at "developing and sustaining a coalition of centrists," a mistake that Bloomberg said had "doomed hope for any real progress on illegal guns, immigration, tax reform, job creation and deficit reduction."

"And, rather than uniting the country around a message of shared sacrifice," Bloomberg added, "he engaged in partisan attacks and has embraced a divisive populist agenda focused more on redistributing income than creating it."

An in 2017, a week after President Donald Trump pulled out of the climate deal, Bloomberg said in an interview on Bloomberg TV, part of the media company he owns, that he wasn't too concerned about what Trump would do, because "it's hard to do less than the last administration did" on climate.

"Obama did basically nothing," Bloomberg continued when pressed by the host. "That administration did almost nothing. All of this was done by the private sector and local governments, city governments. And so we can just continue" doing that work.

In a statement, Bloomberg national press secretary Julie Wood said that Bloomberg "has never been shy to critique Washington dysfunction or partisan division" and that he believes Obama "showed extraordinary leadership."

"From the moment Mike first met then-Senator Obama in November 2007, he knew he'd be a singular force in American history," she said. "Since then, Mike and President Obama worked together on reducing gun violence, tackling climate change, expanding technical career training and helping young black men stay on track for success through My Brother's Keeper, which was modeled after Mike's Young Men's Initiative."

Still, Bloomberg's embrace of Obama has frustrated no one more than Biden, whose campaign is largely built around his close relationship and partnership with his former boss.

"He wouldn't even endorse Barack in 2008. He wouldn't endorse him," Biden lamented Sunday on NBC News' "Meet the Press." "You know, he endorsed Bush. He endorsed, you know, the Republican before that. All of a sudden, he's his best buddy."

More from NBC News:
Poll: Sanders opens up big lead over Democrats
Warren: Sanders 'has a lot of questions to answer' about supporters' attacks
Biden, Klobuchar hit Bloomberg's record ahead of Nevada debate