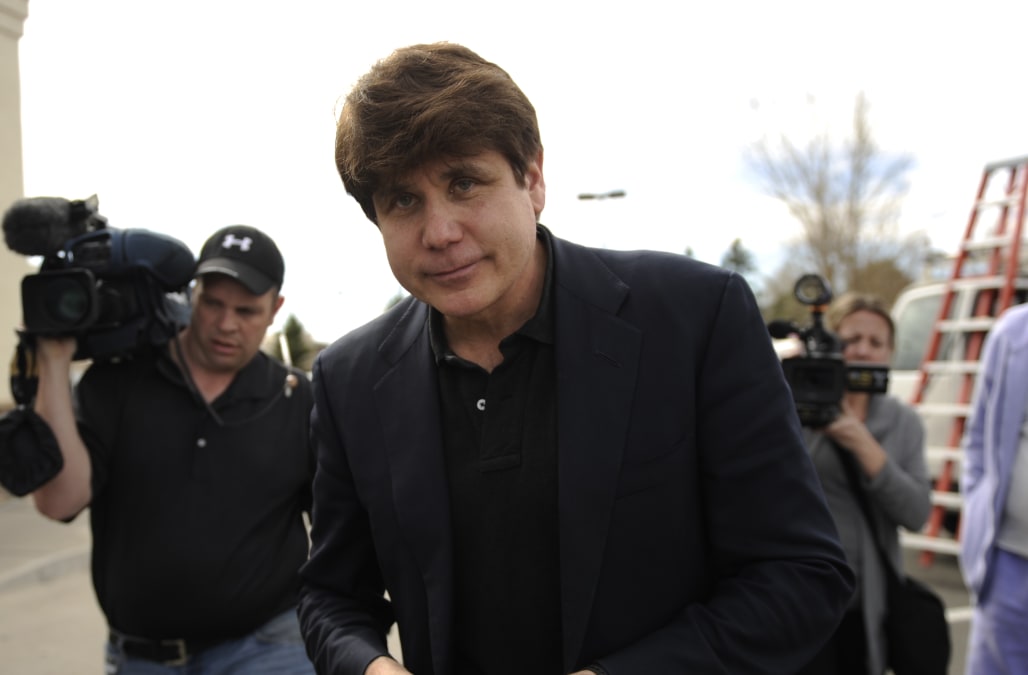 President Donald Trump on Tuesday commuted the sentence of former Illinois Gov. Rod Blagojevich, who was convicted of federal corruption charges, including an attempt to sell the U.S. Senate seat previously held by then-President Barack Obama.

The commutation was first reported by The New York Times.

Blagojevich served as the state’s Democratic governor from 2003 to 2009 before he was given a 14-year prison sentence in 2012. Blagojevich was convicted a year earlier on 18 felony corruption charges related to his illegal use of campaign finances and attempts to exchange bribes for political favors.

The most brazen of his crimes, however, was his attempt to sell the U.S. Senate seat held by Obama when he was elected president. In a 2008 phone conversation wiretapped by the FBI, Blagojevich joked about selling the seat to Chicago Rev. Jeremiah Wright.

“How funny would it be sending Rev. Wright there?” Blagojevich said in the call. “I bet you he’d take it. Wouldn’t that be fucking funny?”

“Right there on the Senate floor, it wouldn’t be God Bless America it would be God Damn America!” Blagojevich added, laughing.

As the scale of his corruption became apparent, The Illinois House of Representatives voted in January 2009 to impeach Blagojevich. The bipartisan measure passed 117-1. Later that month, the Illinois Senate voted unanimously, 59-0, to remove the governor and bar him from ever holding political office in the state again.

In 2016, the U.S. Supreme Court denied for a second time a request from the disgraced ex-governor to appeal the corruption charge convictions.

Blagojevich filed clemency paperwork in 2018 officially asking Trump to commute his sentence. Trump had said one month prior he was “seriously thinking about” commuting the sentence.

“Eighteen years is, I think, really unfair,” Trump said of Blagojevich’s sentence (Blagojevich was sentenced to 14 years, not 18). Trump added that Blagojevich was convicted “for being stupid and saying things that every politician, you know that many other politicians say.”

Trump and Blagojevich previously worked together on “The Celebrity Apprentice” in 2010, which the future president was hosting at the time.

Trump has shown an affinity for his pardon powers in the past, commuting the sentence of Alice Johnson, who was serving a lifetime sentence for a nonviolent drug offense, after reality star Kim Kardashian West requested he do so in 2018.

In November, Trump cleared Navy SEAL Special Operations Chief Edward Gallagher — who was accused of committing several war crimes, including posing with the body of a dead teenage Islamic State captive he had just killed with a hunting knife — of all wrongdoing and gave him a promotion. Navy SEALs who testified against Gallagher called him “evil,” with one soldier saying Gallagher was “perfectly OK with killing anybody.”

More recently, Trump alluded to pardoning his longtime political ally Roger Stone, who was convicted in November of lying to Congress and witness intimidation over his connection with Russian interference in the 2016 presidential election.

In the midst of Special Counsel Robert Mueller’s investigation, which examined potential obstruction of justice committed by the president, Trump even claimed that he could pardon himself.

“As has been stated by numerous legal scholars, I have the absolute right to PARDON myself, but why would I do that when I have done nothing wrong?” he tweeted in 2018.

Rod Blagojevich Appeal
Former Illinois Gov. Rod Blagojevich stopped at Freddy's Frozen Custard & Steakburgers before turning himself in to the Federal Correctional Institution (FCI) Englewood just a few minutes away in Littleton, Colorado, to begin his 14-year prison sentence on corruption charges Thursday, March 15, 2012. The 55-year-old Democrat becomes the second Illinois governor in a row to go to prison for corruption. Joe Amon, The Denver Post (Photo By Joe Amon/The Denver Post via Getty Images)
CHICAGO - MARCH 14: Disgraced former Illinois Governor Rod Blagojevich kisses his wife Patti during a news conference outside his home March 14, 2012 in Chicago. Blagojevich must report to a federal prison in Colorado by tomorrow, to start serving a 14-year term he received for his conviction on numerous counts of fraud and corruption including attempting to sell the vacant U.S. Senate seat held by then Senator Barack Obama. (Photo by Frank Polich/Getty Images)
Up Next