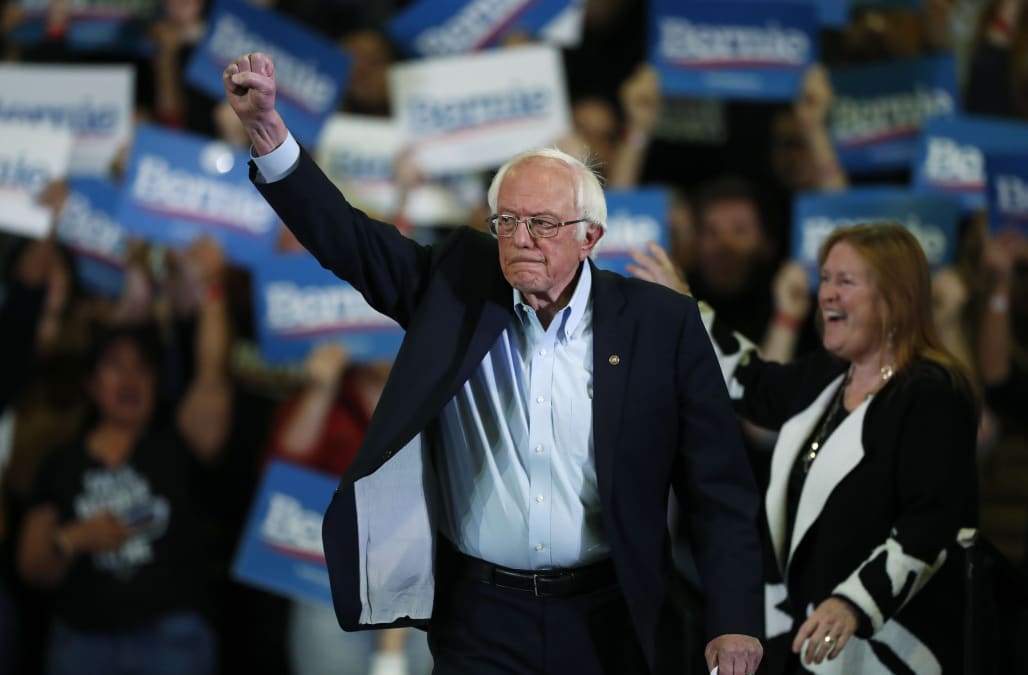 LAS VEGAS — Vermont Sen. Bernie Sanders has jumped out to a double-digit national lead in the Democratic presidential contest after his victory in New Hampshire’s primary and his second-place finish for delegates in Iowa’s disorganized caucuses, while former Vice President Joe Biden has seen his support drop by 11 points since his disappointing finishes in both contests, according to a new NBC News/Wall Street Journal poll.

The survey also shows former New York City Mayor Michael Bloomberg gaining ground in the Democratic race in the past month, confirming the findings of an earlier NPR/PBS/Marist poll that appeared to qualify him for Wednesday night’s NBC News and MSNBC Democratic debate in Las Vegas.

And the poll has President Donald Trump’s approval rating tied for his all-time high in the NBC News/WSJ survey, while also finding that the most unpopular candidate qualities in a general election are being a socialist, being older than 75 years of age and having a heart attack in the past year.

“There is one clear and inescapable set of results: Bernie Sanders is the definitive [Democratic] front-runner, and the current numbers do not represent his ceiling, but instead his base with room to grow,” said Democratic pollster Peter Hart, who conducted this survey with Republican pollster Bill McInturff of Public Opinion Strategies.

“His downsides are there,” Hart added of Sanders. “But they’ve yet to be exploited by his opponents.”

In the poll, Sanders gets the support of 27 percent of Democratic primary voters — unchanged from January’s NBC News/WSJ survey before the Iowa and New Hampshire contests.

But so much else is different.

Biden, the former vice president, now gets support from 15 percent of Democratic primary voters, which is down from 26 percent last month.

Sen. Amy Klobuchar, D-Minn., gets support from 7 percent of Democratic primary voters, which is up 2 points since last month.

No other candidate gets more than 2 percent in the poll.

Inside the Democratic horserace numbers, Sanders over-performs among liberals and those ages 18-34.

Biden and Bloomberg, meanwhile, do the best among moderates and conservatives, as well as those who are 65 and older.

Biden continues to lead among African-American Democratic primary voters, but his support has declined from 52 percent in January to 38 percent now, while Sanders’ backing among these voters has remained steady in the 20's.

“Biden’s support with African Americans is under assault,” said McInturff, the GOP pollster.

When the Democratic field is reduced is just Sanders and Bloomberg, the Vermont senator holds a 20-point national lead over the former New York City mayor, 57 percent to 37 percent.

And Sanders also holds a double-digit lead over Buttigieg in a hypothetical two-person race, 54 percent to 38 percent.

Turning to the general election in November, 47 percent of all registered voters say they approve of President Trump’s job, which is up one percentage point from last month and is tied for his all-time high in the NBC News/WSJ poll.

In addition, 53 percent of voters say they approve of the president’s handling of the economy — up 1 point since Oct. 2019.

In hypothetical general-election matchups, Trump trails five major Democratic candidates, but all of his deficits — except against Biden — are within the poll’s margin of error.

Bloomberg is ahead by 7 points, 50 percent to 43 percent.

And Klobuchar leads the president by 3 points, 48 percent to 45 percent.

But many of these margins get smaller when the race is narrowed to voters from 11 battleground states — Arizona, Colorado, Florida, Maine, Michigan, Minnesota, Nevada, New Hampshire, North Carolina, Pennsylvania and Wisconsin.

Only Biden maintains his same lead, 52 percent to 44 percent.

By contrast, just 27 percent of all voters say they have reservations or are very uncomfortable with a presidential candidate who is gay or lesbian.

And only 14 percent say they’re bothered by a candidate being a woman.

When identified by name, 47 percent of all voters say they are “very uncomfortable” with Trump on the ballot in 2020; 44 percent say the same about Sanders; 41 percent say that about Warren; and 39 percent say it about Biden.

Finally, 51 percent of all voters in the poll say they favor the U.S. Senate’s decision to acquit Trump in the impeachment trial against him.

That’s compared with 47 percent who oppose the Senate’s decision.

And 53 percent say that Trump’s comments and actions after his acquittal have been inappropriate, versus just 20 percent who believe they have been appropriate.

The NBC News/WSJ poll was conducted Feb. 14-17 of 900 registered voters — more than half of whom were reached by cell phone — and its overall margin of error is plus-minus 3.3 percentage points.

The margin for error for the 426 Democratic primary voters the poll measured is plus-minus 4.8 percentage points.

More from NBC News:
Warren: Sanders 'has a lot of questions to answer' about supporters' attacks
Biden, Klobuchar hit Bloomberg's record ahead of Nevada debate
After split results, Democrats brace for a long primary. Just what Bloomberg wants.