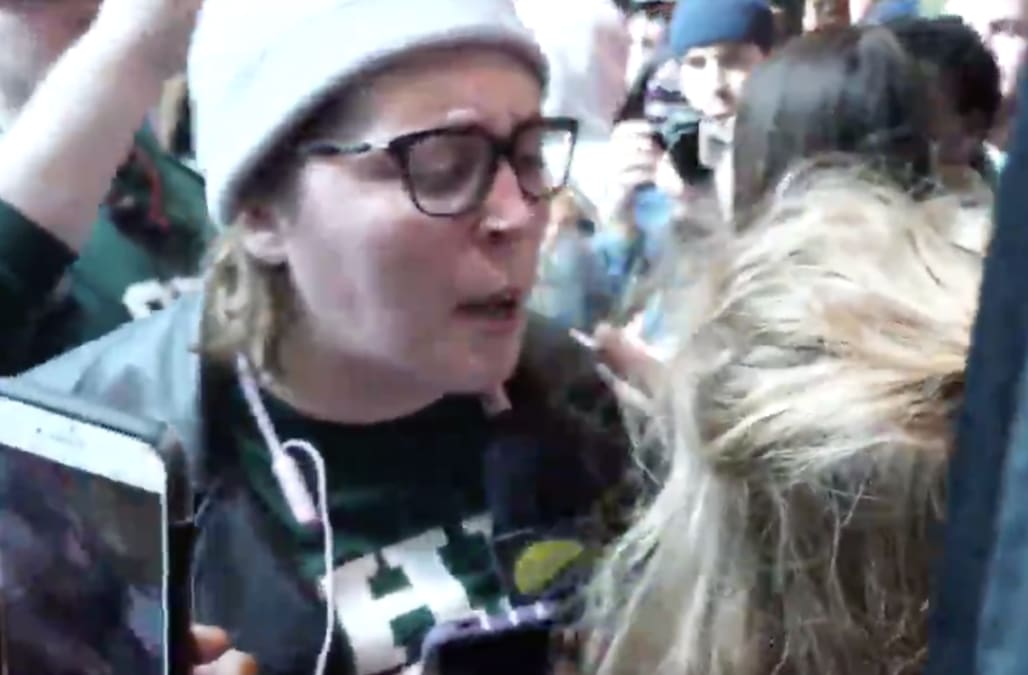 A controversial gun rights activist was forced to leave a college campus after hundreds of students protested her visit.

Kaitlin Bennett, known as the “Kent State gun girl,” visited Ohio University in Athens, Ohio on Feb. 17, Cleveland.com reported. The 24-year-old’s presence was met with overwhelming negativity from the student body, who left Bennett claiming she’d been “bullied” off campus by terrorists.

“This is what happens when a Trump supporter goes to a college campus,” Bennett, who became famous in 2018 when she posed with an assault rifle in her college graduation photos, tweeted after her visit.

“Leftists at @ohiou started a riot when @Joelpatrick1776 and I showed up, and the @oupolice let it happen,” she added. “I think @realDonaldTrump should strip funding from universities like this that harbor terrorists.”

This is what happens when a Trump supporter goes to a college campus. Leftists at @ohiou started a riot when @Joelpatrick1776 and I showed up, and the @oupolice let it happen. I think @realDonaldTrump should strip funding from universities like this that harbor terrorists. pic.twitter.com/5TMlfdto9O

Bennett’s tweet came with a video of Ohio University students yelling at her, flipping her off and throwing beverages at her vehicle. The clip was just one of many to emerge from the day, which saw dozens of students upload their own footage of the protests.

One video shows a student calling Bennet a “racist a** b****,” while another shows a man playing a snare drum to “drone out” her voice.

“Now that’s how to silence a bully,” one Twitter user said of the drumming video.

this guy playing the drums to drone kaitlin bennett out is my hero pic.twitter.com/p8jc9MlBwn

Bennett, who has continued to face controversy since leaving Kent State, later tweeted that there had been a “riot” on campus and claimed students had thrown hot coffee on Joel Patrick, a conservative, self-proclaimed “Legendary Black Redneck” who joined her on the visit.

The Ohio University Police refuted those claims though, issuing a formal statement in which they said there had not been a “riot” and that both Bennett and the protesters were simply exercising their right to free speech. The department added that it had not forced Bennett to leave campus.

“There were no reported injuries or violence, and no one was arrested during the event,” the statement read.

Please see the attached statement regarding a protest incident today on the @ohiou Athens campus. pic.twitter.com/NigbKBf077

Liam McSteen, an Ohio University student, told Cleveland.com that he believed Bennett’s visit, which was not announced in advance, was simply a publicity stunt.

“I kind of feel like she just came here to get this reaction,” sophomore Liam McSteen tells Cleveland.com. “I think it’s just kind of attention-seeking behavior. I don’t know if she thinks she’s going to change anyone’s mind out here.”

But Bennett has already stated that she intends to come to the school again, tweeting that she would bring an “army” of gun supporters to walk through campus. She added that she’s received multiple “credible threats” on her life since becoming famous and would not let a group of students deter her.

“Their hatred makes me stronger,” she tweeted.

Bennett, who also advocates against abortion and believes “taxation is theft,” has remained a divisive media figure since going viral in 2018. Shortly after graduating, she challenged the Parkland, Fla., shooting survivor David Hogg to an arm-wrestling contest for the right to “keep the 2nd Amendment.”