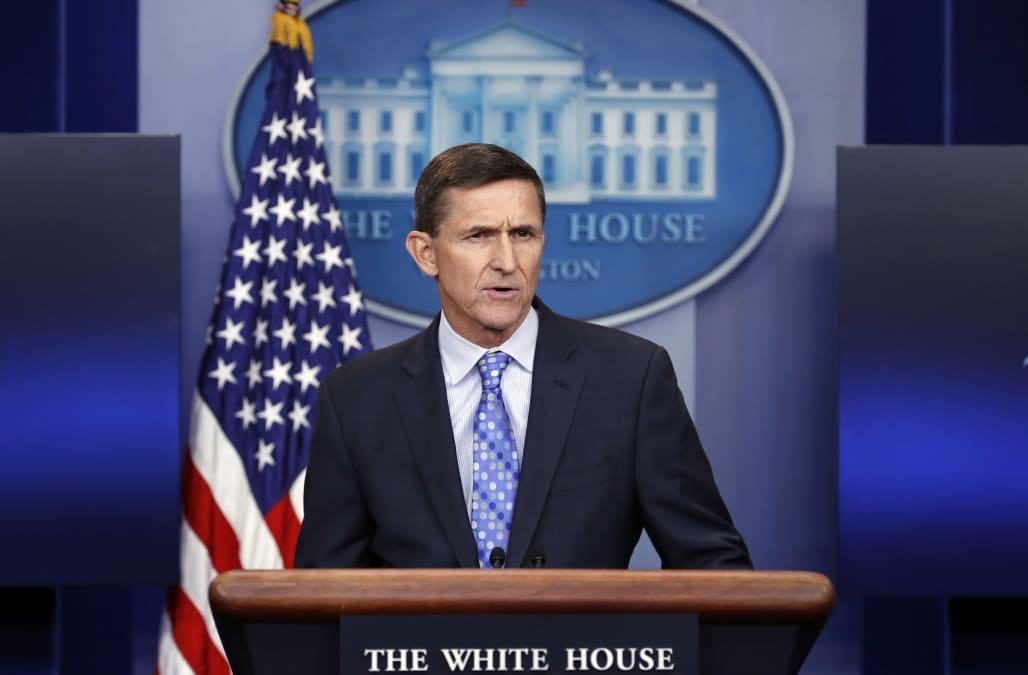 WASHINGTON — The Justice Department recently opened an inquiry into the circumstances surrounding the FBI's interview of Michael Flynn while he was serving as President Donald Trump's national security adviser, according to two people familiar with the inquiry.

Flynn pleaded guilty to giving false statements to the FBI during that interview, but recently asked to withdraw that plea, further delaying his sentencing.

Attorney General William Barr asked the U.S. attorney for the Eastern District of Missouri, Jeffrey Jensen, to look into Flynn's FBI interview, the people familiar with the inquiry said. The inquiry began within the past month, they said.

Around that same time, federal prosecutors on the Flynn case came under pressure from senior Justice Department officials to recommend a lighter sentence for Flynn than they had proposed, according to people familiar with the matter.

Asked about the inquiry into Flynn's FBI interview, a spokesperson for Jensen said, "I can't answer those questions" and directed questions to the Justice Department.

A spokesperson for the Justice Department declined to comment.

One of the people familiar with the inquiry described it as "very sensitive."

The inquiry comes amid growing criticism of Barr's efforts to take a heavier role in matters within the Justice Department that are of personal interest to the president, including the Flynn case and the sentencing of Trump associate Roger Stone, who was convicted of witness tampering and lying to Congress.

The inquiry also coincides with recent moves by Trump to vindicate his allies and exact revenge on his perceived enemies, including individuals who were involved with special counsel Robert Mueller's investigation or testified in House Democrats' impeachment probe.

In early January prosecutors recommended that Flynn serve up to six months in jail. But they were overruled three weeks later on Jan. 29, when the government submitted a new sentencing recommendation to the judge saying probation for Flynn was appropriate.

The inquiry into Flynn's FBI interview could be aimed at several former officials Trump has repeatedly criticized publicly, including former FBI Director James Comey and former Deputy FBI Director Andrew McCabe, people familiar with the inquiry said. They also said it could be part of an effort to make a presidential pardon of Flynn more palatable.

Trump has not ruled out a pardon of Flynn, or Stone.

When asked Wednesday if he was considering a pardon of Stone, Trump said, "I don't want to say yet."

On Tuesday four prosecutors on the Stone case resigned from the case — one of them left government entirely — after the Justice Department intervened to reduce their recommended sentence for Stone of seven to nine years in prison. The announcement of a reduction came just hours after Trump publicly complained that the recommended sentence was too harsh.

The FBI interviewed Flynn at the White House about his Russia contacts on Jan. 24, 2017, just four days after Trump's inauguration.

Comey and McCabe signed off on sending two agents to interview Flynn. One of the agents was Peter Strzok.

The Justice Department inspector general has said that opening the investigation was legitimate, and on Friday the department informed McCabe that he would not face criminal charges in an investigation into whether he lied about a leak to the media. But Trump has made clear that he believes Strzok, Comey and McCabe should be charged with criminal wrongdoing for their role in the Russia investigation.

"If you look at what happened — how many people were hurt. Their lives were destroyed. And nothing happened with all the people that did it and launched this scam," Trump said Wednesday. "Where is Comey? What's happening to McCabe?"

He asked the same about Strzok and added, "It was a whole setup. It was a disgrace for our country."

Jensen's inquiry seems similar to one Barr assigned to the U.S. attorney in Connecticut, John Durham, that's examining the origins of the FBI's investigation into potential ties between Trump's 2016 campaign and Russia. Durham's inquiry evolved into a criminal investigation, raising questions about whether Jensen's may as well.

Frank Figliuzzi, an NBC News analyst and former FBI assistant director for counterintelligence who has been critical of the Durham investigation, said asking a U.S. attorney to look into the FBI's interview overrides the FBI and Justice Department's customary internal oversight.

"This is what the inspector general is for," Figliuzzi said. "So the message that's being sent is: We no longer trust the FBI or DOJ to police themselves. We are abandoning the usual course of oversight."

If the focus of Jensen's inquiry is whether FBI agents "ambushed" Flynn or altered the report on his interview, which Flynn's supporters have claimed though there has been no evidence of that, that inquiry would typically start within the FBI, Figliuzzi said. "When you strip the ability of the FBI to do this, you're actually weakening them," he said.

In terms of Durham's investigation, Barr has said he believes an inquiry by the inspector general would not sufficiently answer questions about the Russia probe.

Chuck Rosenberg, a former U.S. attorney in Virginia and NBC News legal analyst, said it's unclear if there's anything improper about assigning Jensen to look into Flynn's FBI interview, but if he's not looking into whether a crime was committed then Barr is potentially misusing a U.S. attorney.

"If you think what you have is a flawed process, or some larger policy issue that needs to be addressed, than you might go to the IG," Rosenberg said. "If you think you have a crime then you would go to a U.S. attorney."

Flynn was fired as national security adviser on Feb. 13, 2017. Flynn pleaded guilty in December 2017 to giving false statements to the FBI and cooperated with Mueller's investigation. However, Flynn later accused the FBI of intentionally trying to catch him off guard to trap him into making false statements. Last month he asked the judge handling his case to withdraw his guilty plea.

The judge, Emmet Sullivan, has reviewed details of the FBI's interview of Flynn and has rejected the notion of any wrongdoing. After Flynn accused federal prosecutors of misconduct in his investigation, including the handling of his FBI interview, Sullivan responded that "the Court summarily disposes of Mr. Flynn's arguments that the FBI conducted an ambush interview for the purpose of trapping him into making false statements and that the government pressured him to enter a guilty plea."

Flynn's lawyer, Sydney Powell — an outspoken critic of the Mueller investigation — has accused the FBI of targeting Flynn because of his alliance with Trump and has alleged "grave misconduct" by the government in his case. Trump called Powell a "GREAT LAWYER" on Twitter after Flynn hired her.

Assigning an inquiry to a U.S. attorney out of the district that has jurisdiction over the matter — in Flynn's case Washington, D.C., or possibly Virginia — is typically done when the district with jurisdiction needs to recuse itself, and that isn't the case with Flynn, said Joyce Vance, a former assistant U.S. attorney in Alabama and MSNBC contributor.

"In absence of a reason to recuse the district, how come they keep sending these cases out to the field?" Vance said. "Maybe it's just an effort to pacify the president, but also maybe it's just one of those things where if you keep looking you find something."

Jensen, who was nominated by Trump in 2017, is a former FBI agent. He is tasked with looking into how the FBI's interview of Flynn took place, as well as how the department handled it afterward, the people familiar with the inquiry said. They said they did not know the timeline for completing the inquiry. Flynn's sentencing hearing, which had been scheduled for this month, was postponed to allow time to sort through the latest motions by the defense and prosecution. No new date has been set.