School officer threatens to shoot student in video: 'You run into me, you’ll get f***ing shot' 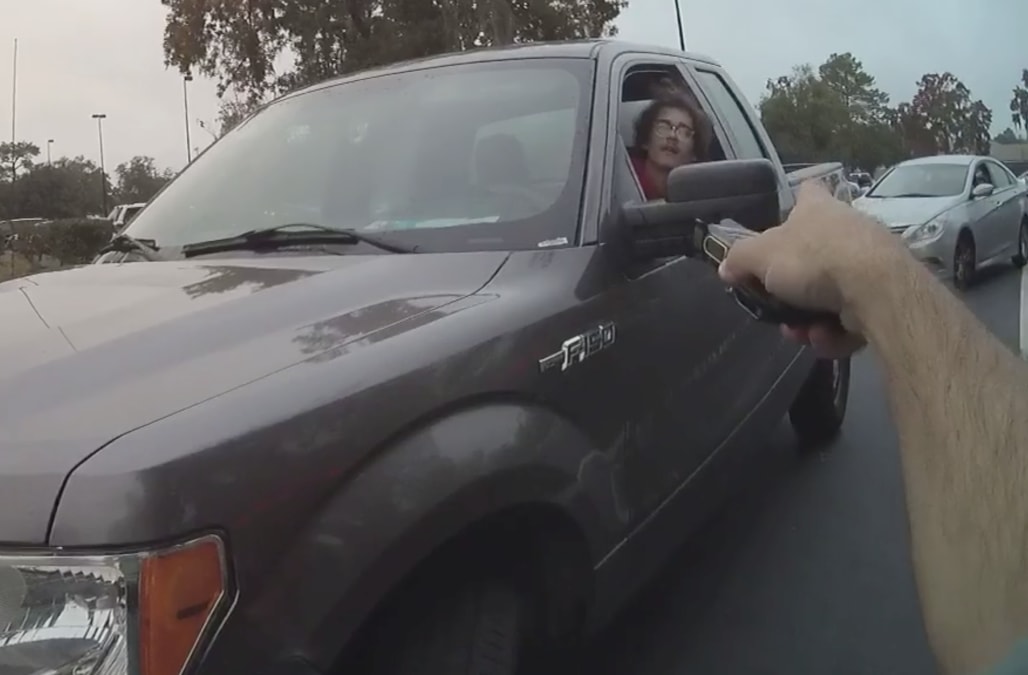 A school officer was caught on his own body camera threatening to shoot a Florida high school student who was trying to leave campus for an appointment.

On Jan. 30, Nedra Miller shared a nearly four-minute video in which an unidentified school resource officer with the Pasco County Sheriff’s Office and a discipline assistant confronted her 17-year-old son William Miller, a student at River Ridge High School in Port Richey, in December 2019.

The footage, posted on Facebook, shows William attempting to leave the campus in a pickup truck as the officer and Cindy Bond, the assistant, stand in his way.

River Ridge High School Ms. Bond and School Resource Officer threatening to shoot my son for trying to go to an orthodontist appointment  after dropping of Another student who missed the bus 

“She said, ‘You’re not leaving until you get a parent on the phone,'” the teenager tells the officer, referring to Bond. “Y’all blocking me like if you’re not holding me, then get the hell out of my way.”

As the student revs up his truck, the officer tells him, “You’re truant.”

William then tries to turn his wheels, prompting the officer to threaten him.

“You’re going to get shot if you come another f***ing foot closer to me,” the officer says. “You run into me, you’ll get f***ing shot.”

William continues to argue with the officer, asserting that he’s old enough to leave campus. When the officer shares a few words with Bond, she turns to the student and suggests that he take “an early vacation and not come back” to the school.

Toward the end of the clip, William tells the two that he has a legitimate excuse to leave campus, but both Bond and the officer dismiss him as he pulls back into the school’s parking lot. In sharing the video, the teenager’s mother confirmed that her son had an orthodontist appointment and had only been on campus to drop a friend off.

“I feel like my blood pressure went sky high while watching this video,” one person wrote. “Who these two ‘adults’ think they are??? Taunting this young man when he has done nothing to provoke such response. Threatening to shoot him??? This is insane. I’m glad there’s a video.”

“You should sue them for abuse of power!” another wrote.

According to the Tampa Bay Times, William was later suspended for more than two weeks before being expelled. The teenager was also reportedly sent to Harry Schwettman Education Center, an educational program that the high school says “provides for students who have violated School Board policy, been recommended for expulsion or have a behavior pattern which has not been improved by a continuum of positive behavior and academic intervention strategies.”

A spokesperson for the Pasco County School District said that Bond met with River Ridge High’s principal following the incident to discuss what could have been done better, but added that the district is not investigating the confrontation.

The officer involved is, however, under an internal investigation by the Sheriff’s Office, per a spokeswoman for the police department. The Times also noted that the officer is still working at the school since there is no criminal complaint filed against him.

Still, Nedra told the newspaper that she wants both Bond and the officer to be held accountable.

“I just feel like if they were all acting like children and my son received that level of discipline, they should, too,” she said. “They should both be removed from their jobs.”