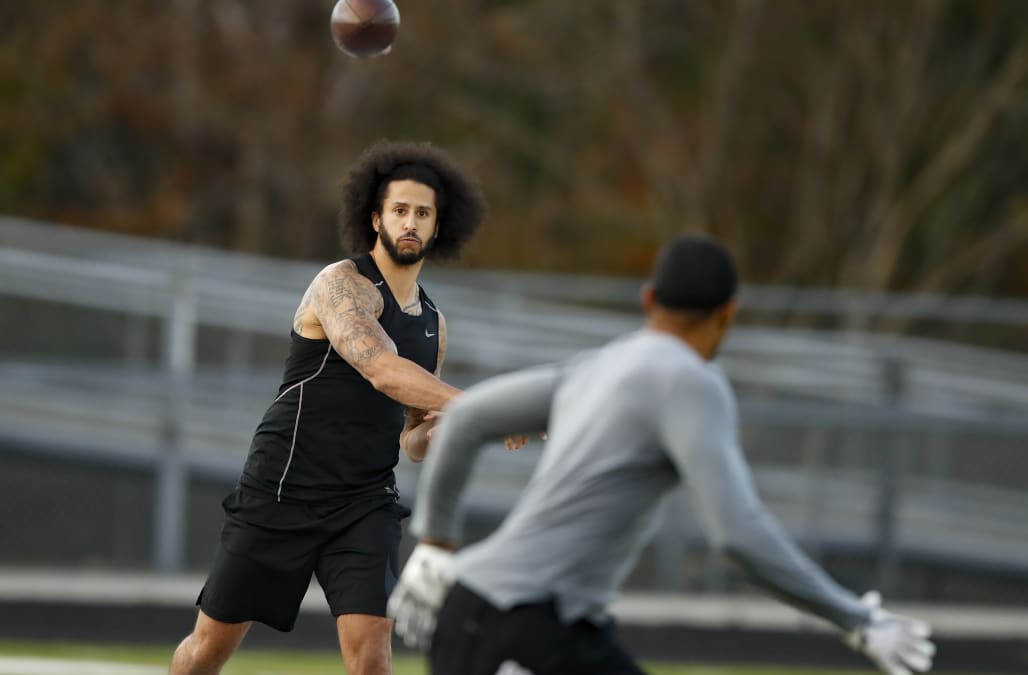 In the midst of last November’s chaotic, hastily called tryout for Colin Kaepernick at the Atlanta Falcons’ training facility, three buses full of Falcons crawled through a hundred-strong horde of protesters, media, onlookers and arriving NFL officials. The players on the buses, headed for a game in Charlotte, stared out the windows at the throng; they were afterthoughts at their own HQ.

A few hours later, after his workout at an Atlanta high school, Kaepernick spoke at — not with — the media, taking no questions as he delivered an impassioned soliloquy about his desire to play football and his demands for transparency.

Those two images — the eclipsing of an entire NFL team and the demand for total narrative control — came to mind when reading Kaepernick’s new interview with USA Today Sports. Released in connection with his announcement of a new publishing initiative, to include his own memoir, the interview’s an uncritical look at where Kaepernick is now and where he’s headed next, which may not be an NFL field.

Could Kaepernick still play in the NFL?

The last time Kaepernick threw an NFL pass, Tua Tagovailoa was still in high school. Prior to the 2016 season, Kaepernick began protesting during the national anthem, seeking to draw attention to what he deemed systematic police brutality. He knelt silently during the anthem, a protest designed in consultation with a military veteran, and set off a culture war that’s only just now receding.

“Distraction” is a handy catch-all term that coaches use to chip away at the edges of any player who pursues any activity not directly related to football, from committing a crime to reading a book. Of course, the problem of “distraction” tends to be in inverse proportion to the degree of talent of a given player — but not even Patrick Mahomes has enough talent to surpass the level of distraction that a Kaepernick signing would bring. His protest put the NFL at odds with the White House; that’s not the kind of “distraction” that fades, particularly if Kaepernick continued to kneel. (His interview didn’t address the question of whether he’d still kneel should he get a new job.)

At his impromptu November combine, rescheduled after he didn’t agree to the NFL’s demands for a closed session, Kaepernick showed some still-impressive arm strength, and he was clearly in decent shape. But he didn’t do any drills to demonstrate elusiveness, decision-making, or the ability to read defenses. Even so, he insists he’d still like to rejoin the NFL.

“My desire to play football is still there,” Kaepernick said. “I still train five days a week. I’m ready to go, I’m ready for a phone call, tryout, workout at any point in time. I’m still waiting on the owners and their partners to stop running from this situation. So I hope I get a call this offseason. I’ll be looking forward to it.”

Kaepernick’s agent said in November that no teams had contacted him up to that point, and no teams sought a further workout after Atlanta.

What’s next for Kaepernick?

One of the elements about Kaepernick’s post-playing career that’s been the most curious is how little he’s used his power and his platform. He’s pursued charitable initiatives and created camps, and he’s helped communities on a small scale, but he’s remained largely silent on the national stage despite the fact that he’s drawn support from a wide swath of America.

This planned publishing house, Kaepernick Publishing, could change that narrative. As outlined in USA Today, the publishing initiative gives Kaepernick and others a chance to tell the stories they want to tell, on their own terms.

“I realized being able to control your narrative and tell your story the way you want to is very important,” Kaepernick said. “The manipulation, the colonization, the distortion of stories, narrative, history, has been done forever. This is a way for me to be able to counteract that and begin to decolonize that and centralize the narrative of not only myself but other black and brown writers and authors.”

Kaepernick opted not to go with a major publisher, and a potential seven-figure advance, for his own, still-untitled memoir. Kaepernick’s side of the protest/anthem story, untold until now, will no doubt be a fascinating one.

Pursuing a dream is a noble American endeavor, and it’s not anyone’s place to tell Kaepernick his NFL dream’s a foolish one. That said, given the realities of the NFL and the tides of culture in 2020, it’s a lot more likely Kaepernick will make future impacts with history books and textbooks than playbooks.