Klobuchar's stance on abortion could appeal to Southern Dems 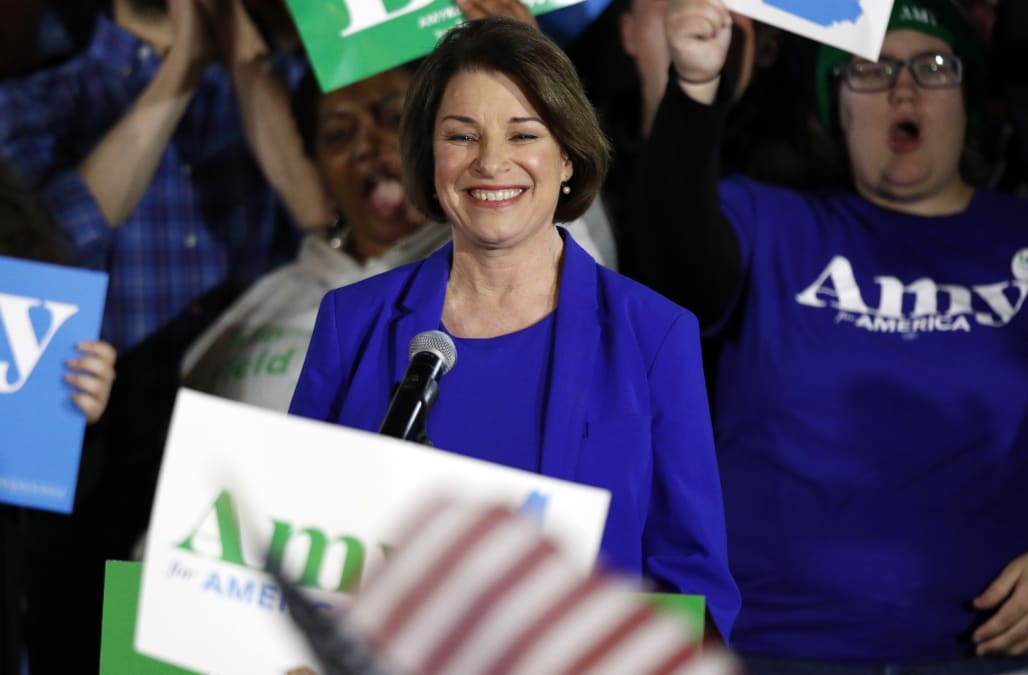 MANCHESTER, N.H. — If Amy Klobuchar is going to capitalize on her strong third-place finish in New Hampshire, she’ll need to use her Midwestern moderate appeal to win over Democratic voters in Nevada and South Carolina over the next two weeks. One issue that could help her accomplish this, especially in the latter contest in a more conservative state, is abortion.

Klobuchar struck a different note than other Democrats on this issue in a Monday interview on “The View.” While maintaining strong personal support for abortion rights, Klobuchar said the Democratic Party has to make room for pro-life voters and candidates.

“I am strongly pro-choice. I have always been pro-choice. But I believe we’re a big-tent party, and there are pro-life Democrats, and they are part of our party. I think we need to build a big tent. We need to bring people in instead of shutting them out,” Klobuchar said.

Her stance stands in contrast to comments from Sen. Bernie Sanders, I-Vt., who, during an MSNBC special last week, proclaimed, “I think being pro-choice is an absolutely essential part of being a Democrat.”

And it’s also a markedly more inclusive stance than the one taken by former South Bend, Ind., Mayor Pete Buttigieg. Asked by a female member of the group Democrats for Life whether he wanted her support, Buttigieg hedged.

“I’m not going to try to earn your vote by tricking you. I am pro-choice, and I believe that a woman ought to be able to make that decision,” Buttigieg said. “The best I can offer is that if we can’t agree on where to draw the line, the next best thing we can do is agree on who should draw the line, and in my view, it’s the woman who’s faced with that decision in her own life.”

As the race heads to the Nevada caucuses on Feb. 22 and the South Carolina primary on Feb. 29, the Democratic electorate in those two states is much more diverse than in the first two contests. As a result, Klobuchar’s big-tent answer on abortion could resonate, especially in South Carolina, even more so if she and Buttigieg are battling it out for non-Sanders voters.

“We are still a religious state,” said Chip Felkel, a Republican political consultant in South Carolina who has grown disaffected with his party during the Trump era. “Abortion is still something that makes a lot of people uncomfortable.”

Klobuchar performed exceptionally well in New Hampshire among voters who attend religious services weekly, winning that category of voter by 12 points, based on exit polling.

Felkel said there are undoubtedly some Democrats in South Carolina who would be receptive to Klobuchar’s more moderate tone on abortion. “I just don’t know if there are enough of them,” he told Yahoo News in a phone interview.

Andy Brack, a former spokesman for late Sen. Fritz Hollings, D-S.C., who now runs StateHouseReport.com and the Charleston City Paper, said that “South Carolina is a lot more conservative place even amongst Democrats than Iowa and New Hampshire. And so when I say that I mean black and white. So I think South Carolina is looking more toward a moderating voice.”

“I don’t see them jumping on a Bernie bandwagon. I don’t really see them jumping on a Pete bandwagon, not because he’s left wing. The sad fact is the African-American churchgoing community is somewhat homophobic, so that’s going to be a problem for him,” Brack said in a phone interview, referring to Buttigieg’s status as the first openly gay man to be a leading candidate for a party’s presidential nomination.

House Majority Whip James Clyburn, D-S.C., the third-ranking Democrat in the House, has repeatedly rejected the notion that black voters in the state are biased against Buttigieg because of his sexuality.

But Brack was also skeptical of Klobuchar’s chances at this point, noting that she has an uphill battle.

“Nobody knows who the hell she is,” Brack said. “She’s got two weeks to sell her message. … It may be a day late and a dollar short.”

Bakari Sellers, a former Democratic member of the South Carolina state Legislature, was even more dismissive of Klobuchar’s chances in the Palmetto State. “Amy Klobuchar is not trying to win anywhere where voters of color live,” Sellers said in a phone interview. He predicted that billionaire hedge fund manager and climate activist Tom Steyer would take the portion of the vote that Klobuchar received in New Hampshire.

Klobuchar has proved she can turn around her fortunes quickly, however. She went from fifth to third in the course of a few days in New Hampshire, largely on the back of a strong debate performance the Friday before the primary, and also thanks to consternation among many Democrats about who has the best shot of beating Trump.

“I think that this election isn’t about a single issue like abortion. The single issue is who can beat Donald Trump,” Brack said.

That is undoubtedly true. And Klobuchar will have to convince voters she is that candidate if she is to have any shot at advancing past South Carolina. But a moderate stance on abortion could play into the matrix voters use to determine who is their best shot to beat Trump, as they think about who is tough and capable enough to stand up to the president but also has the ability to appeal to moderate Republicans and independents who are looking for a way to vote against Trump but can’t stand the idea of a left-wing president.