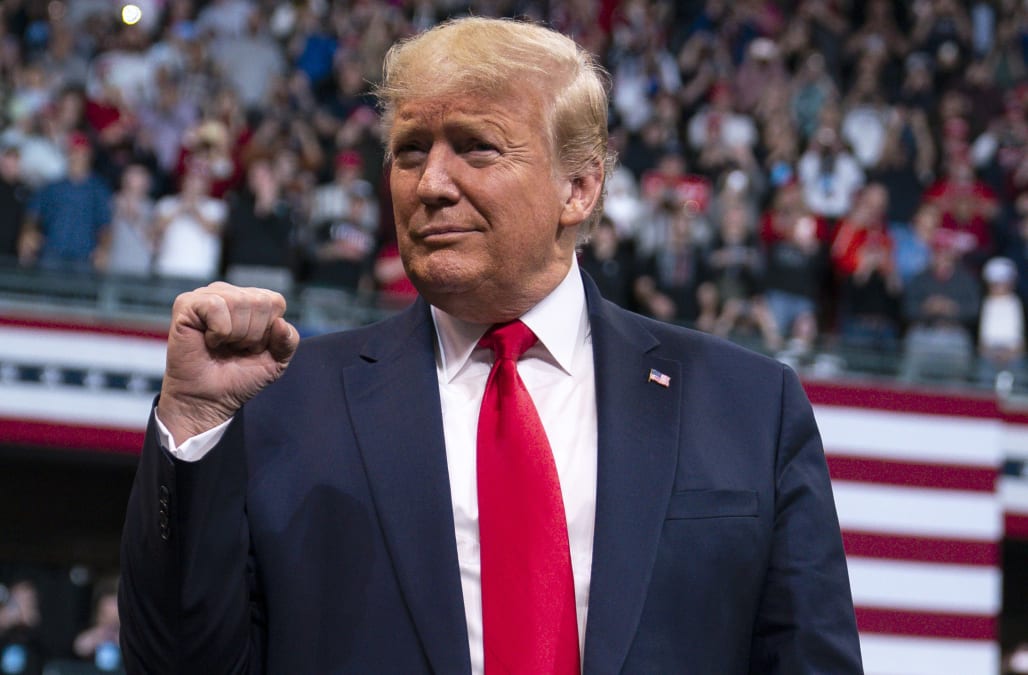 Seemingly emboldened by his impeachment acquittal, President Donald Trump held a wild campaign rally in New Hampshire on Monday, delighting supporters by reprising some of his 2016 campaign's greatest hits.

Among them was a 1963 poem called "The Snake," which Trump interpreted as a parable on the dangers of illegal migration. Many critics have repeatedly denounced Trump's version of the poem as racist scare-mongering.

"I used to do this a lot and people couldn't get enough of it. To be honest with you — and I haven't done it for a while — I thought I would do it tonight because you're on the eve of giving us an opponent and all of these people want open borders," Trump told supporters in Manchester.

He was referring to the New Hampshire Democratic primary, which began midnight Tuesday and will close between 7 and 8 p.m. EST throughout the state. (You can see live vote counts here.) Trump has also falsely claimed that the Democratic Party supports an end to US border controls for migrants.

After his preamble Trump read out the poem, which describes a woman who takes in an injured snake that ends up turning on her and biting her.

It was a crowd favorite during his 2016 presidential campaign, but the last time he recited it was a year ago at the CPAC conference in Washington, DC.

As he did during his 2016 rallies, Trump reads "The Snake" to illustrate the purported danger of immigrants pic.twitter.com/uXncOrJhTD

"'Oh, shut up, silly woman!' said the reptile with a grin. 'You knew damn well I was a snake before you took me in,' " said Trump, reading from the poem, as the audience cheered.

During the Monday rally, Trump falsely claimed that he was quoting from a song by soul legend Al Green, CNN reporter Daniel Dale tweeted.

The poem was recorded as a song by soul singer Al Wilson in 1968, but was written by Oscar Brown Jr., an African-American civil-rights activist, poet, and former Communist Party member.

Brown's daughters have previously told the president to stop distorting the meaning of their father's poem to push his anti-migrant message.

"He's stealing and he's twisting Oscar's meaning to serve his own campaign and climate of intolerance and hate, which is the opposite of what the original author, Oscar Brown Jr., intended," Maggie Brown told MSNBC last year. Trump also reiterated claims that his impeachment was a "partisan hoax," and focused his attacks on House Speaker Nancy Pelosi, one of the main Democrats that drove his impeachment.

This prompted the crowd to reprise their chants of "lock her up"— another crowd favorite previously aimed at his 2016 Democratic opponent, Hillary Clinton.

Footage from the rally showed Trump did not join in the chants, but gave a thumbs-up sign and appeared to smile as they continued.

"It was very distracting. I'm speaking and a woman is mumbling" -- Trump mocks Nancy Pelosi for supposedly mumbling behind him during SOTU, prompting the crowd to chant "lock her up!" pic.twitter.com/KsX6I1SVyo

He also lavished praise on his supporters and children, even calling his daughter Ivanka Trump on stage to join him.

He described her as "beautiful" to the crowd, adding: "I'm not allowed to say that because it's my daughter."

Trump has a long history of praising his daughter's physical appearance in a way that many people — including some who were present when he made the remarks — have found inappropriate.

More from Business Insider:
Trump tweeted a clip from 'Curb Your Enthusiasm' that shows Larry David in a MAGA hat, seemingly not realizing it's an insult
Alexander Vindman's lawyer has hit back at Trump, accusing him of waging a 'campaign of intimidation' against impeachment witnesses
A pregnant mother infected with the coronavirus gave birth, and her baby tested positive 30 hours later