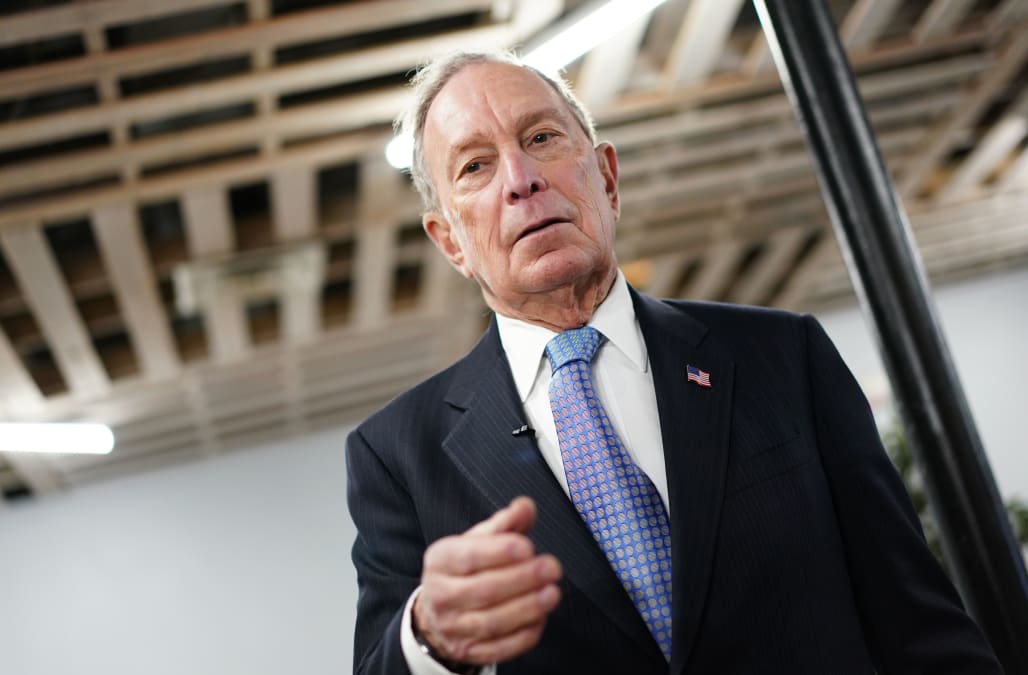 In the clip shared on Twitter by podcast host Benjamin Dixon, the now-Democratic presidential candidate can be heard saying during a Q&A at The Aspen Institute that kids in minority neighborhoods need to be “thrown up against the wall” and frisked in order to reduce crime rates.

“Put a lot of cops in the street,” Bloomberg said while discussing what other cities can learn from New York City’s policing model. “Put those cops where the crime is, which means in minority neighborhoods.”

He continued: “One of the unintended consequences is people say, ‘Oh, my God, you are arresting kids for marijuana that are all minorities.’ Yes, that’s true. Why? Because we put all the cops in the minority neighborhoods. That’s true. Why did we do it? Because that’s where all the crime is.”

Audio of @MikeBloomberg’s 2015 @AspenInstitute speech where he explains that “you can just Xerox (copy)” the description of male, minorities 16-25 and hand to cops.

Bloomberg had video of speech blocked.

Perhaps because of the problematic explanation he gives for #StopAndFriskpic.twitter.com/Fm0YCi4ZRy

Bloomberg, who served three terms as mayor from 2002 to 2013, was a vocal proponent of stop-and-frisk, which allowed police officers to temporarily detain, question and search members of the public on the street for potential weapons and illegal contraband if the officer had a reasonable suspicion of a threat.

The policy, which disproportionally affected Black and Latino people, was condemned by many Democrats and civil rights activists as racist and ineffective. A federal judge ruled in 2013 that stop-and-frisk was unconstitutional. Bloomberg appealed the ruling, but the city dropped the appeal after Bill de Blasio, a staunch critic of stop-and-frisk, was elected mayor later that year. He announced a settlement in the case in 2014.

Days before formally announcing his 2020 Democratic presidential bid in November, Bloomberg apologized for supporting stop-and-frisk at a Black megachurch in Brooklyn.

“I was wrong and I am sorry,” he told the crowd at the time. “The fact is, far too many people were being stopped while we tried to [reduce crime] and the overwhelming majority of them were Black and Latino. That may have included, I’m sorry to say, some of you here today.”

While some accepted Bloomberg’s apology at face value, others questioned the sincerity of his reversal on the policy.

“For years, he has defended ‘stop-and-frisk,’ the racially discriminatory and ineffective police tactic that he backed and expanded as NYC’s mayor,” Rolling Stone writer Jamil Smith tweeted at the time. “Now that he is running for president and needs black votes, he’s sorry.”

Bloomberg, who blocked The Aspen Institute from releasing footage of his remarks at the time, said at the 2015 event that 95% of murderers and murder victims “fit one M.O.”

“You can just take the description and Xerox it and pass it out to all the cops,” he said. “They are male minorities, 15-25. That’s true in New York. It’s true in virtually every city. And that’s where the real crime is.”

Nobody in New York gets murdered ― if you get murdered, first thing we want to do is, what were you selling or who are your family members? Because it just has to be you’re a drug dealer or you have ... a family quarrel. There’s just no other, no other kind of verdict whatsoever. In the other cities, where they haven’t gone after scaring the kids to get guns out ... a lot of people don’t like the fact that what they do, but that’s what’s stop-and-frisk is all about.

The way you get the guns out of the kids’ hands is to throw them up against the wall and frisk ’em. And then they say, “Well, I don’t want to get caught.” So they don’t bring the gun. They still have a gun, but they leave it at home.

Bloomberg’s campaign did not immediately respond to HuffPost’s request for comment.

Dixon’s tweet of the 2015 audio had garnered over 3.5 million views as of Tuesday morning. Though audio of the event has been online since 2015, Bloomberg’s run for president sparked renewed interest in his comments.

“I am staunchly against Michael Bloomberg buying his way into the campaign,” Dixon told HuffPost of the billionaire businessman’s presidential bid. “And this [audio] was hiding in plain sight. ... People need to hear it.”

“For Black and brown boys in New York, he’s not much better for them than [President Donald] Trump is,” he added.

Bloomberg, who has poured millions of dollars into advertising his candidacy, has seen his support from Black voters rise in recent weeks. A Quinnipiac University poll released on Monday showed Bloomberg trailing only behind former Vice President Joe Biden in support from the Black community. Among Black Democratic-leaning voters, 27% said they support Biden in the primaries, compared to 22% for Bloomberg and 19% for Sen. Bernie Sanders (I-Vt.).

“If all you see and all you hear all day long is Bloomberg than you start believing that maybe he is the guy to beat Donald Trump,” Dixon said.

“I don’t believe it’s going to stop his campaign,” he said of the resurfaced audio. “But I think it will at least give him a little indigestion this morning.”

Twitter lit up in response to Dixon’s tweet, with some accusing Bloomberg of being “vile” and “racist.”

This is disgusting. Every cable news show should be leading with and discussing this today. https://t.co/KCnA3EHq2U

This is one of the most vile things you'll ever hear any mainstream figure say, and if you think you're going to bully or coerce or insult people into voting for him if he's the nominee, I think you're living in a very warped dream land. https://t.co/tKOMNAZWsv

This should be playing on mainstream news channels as frequently as the ads with which billionaire Bloomberg has saturated the market. #integritybeatstrumphttps://t.co/45fkMMfM84

Trump, who encouraged Chicago police in 2018 to implement stop-and-frisk, shared the audio clip of Bloomberg’s comments on Tuesday morning.

“WOW, BLOOMBERG IS A TOTAL RACIST!” the president said in since deleted tweet. The White House declined to comment. A representative for Trump’s reelection campaign did not immediately respond to a request for comment.

Listen to Bloomberg’s 2015 comments at The Aspen Institute below. His stop-and-frisk remarks begin around the 41-minute mark.