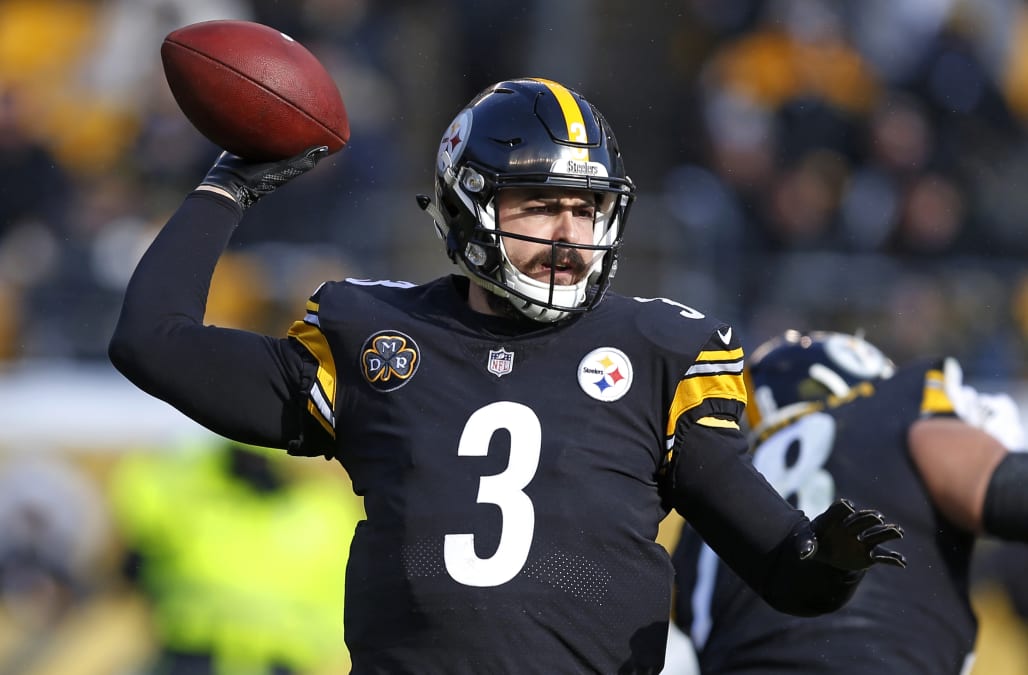 The XFL is back.

For fans still looking for some football after the Super Bowl officially brought the end of the NFL season, the XFL is a great chance to get your fix. Across all eight rosters are players familiar to football fans, from NFL journeymen to former college standouts.

The eight teams will compete through a 10-week regular season that carries through the next three months, culminating in a championship game in April.

Take a look below at the eight teams that make up the new league, their coaches, and the players to watch on each roster. Why you might remember him: Landry Jones first earned notoriety as an Oklahoma Sooner. After being selected by the Pittsburgh Steelers in the fourth round of the 2013 draft, Jones backed up Ben Roethlisberger through the 2018 season, appearing in 18 games over his NFL career.

Though he never saw extended time as a starting quarterback, he did have success in his limited opportunities, earning a 3-2 career record.

With the Dallas Renegades, Jones is reunited with his college coach, Bob Stoops. Expect the Renegades to be one of the more pass-happy teams in the league. Why you might remember him: With Stoops and Jones to anchor the Renegades passing attack, Jazz Ferguson should emerge as one of the team's top receivers.

Ferguson ran a 4.45 at the combine, but went undrafted in 2019, eventually joining the Seattle Seahawks for training camp and spending time on the team's practice squad. Should he shine in Stoops' offense, he could be in for a big year. Why you might remember him: Cardale Jones won a national championship as the quarterback of the Ohio State Buckeyes in 2016.

After being taken by the Bills in the fourth round, Jones struggled to find his footing in the NFL, spending time with the Chargers and Seahawks but never getting an extended shot on an active roster.

As the starting quarterback for the Defenders, he'll likely have a good amount of support from Buckeyes fans across the country. Why you might remember him: At 6'7", it's tough to miss Tyree Jackson. The Buffalo alum went undrafted in 2019, signed with the Bills for training camp, but was ultimately cut before the start of the season.

While he's backing up Jones to start the year in the XFL, Jackson's size and arm make him one to watch. Why you might remember him: Scooby Wright is another player that has always been just outside of a steady job in the NFL.

After a successive college career with Arizona, which saw him named the Pac-12 Defensive Player of the Year in 2014, Wright was drafted by the Cleveland Browns in the seventh round. He ultimately landed on the team's practice squad, and later the Arizona Cardinals practice squad.

He played with the Arizona Hotshots through the brief existence of the Alliance of American Football and then spent a few weeks on the Patriots practice squad in the 2019 season.

Playing for the Defenders, Wright should have a good opportunity to live up to his team's name.

Why you might remember him: Matt Elam was an All-American for the Florida Gators before being drafted in the first round of the 2013 draft by the Baltimore Ravens.

After a promising rookie season, Elam struggled a bit, slipping in playing time and eventually suffering a few injuries that sidelined him for long stretches. Then in 2017, Elam was arrested on a marijuana possession charge in Florida, at which point the Ravens said he was no longer a part of their future plans.

Alongside Wright, Elam and the Defenders defense should be one to watch. Why you might remember him: P.J. Walker played for the Temple Owls under Matt Rhule during an impressive rebuild that saw the team win the AAC in 2016.

While he's undersized, Walker's solid arm and elusiveness in the pocket more than make up for what he lacks in height.

Walker beat out former Michigan State quarterback Connor Cook for the starting job with the Roughnecks to start the year.

Why you might remember him: Connor Cook was the starting quarterback for the Michigan State Spartans for three seasons.

After being drafted by the Oakland Raiders in the fourth round of the 2016 draft, Cook spent most of the year as the third quarterback on the depth chart. Unfortunately, due to injuries to starter Derek Carr and backup Matt McGloin, Cook would have to make his first start in the wild-card round against the Houston Texans.

Cook finished that game with a dreadful stat line, completing 18 of 45 passes for 161 yards, one touchdown, and three interceptions.

From there, Cook bounced around on practices squads in Carolina, Cincinnati, and Detroit before landing in the XFL.

Cook will once again start the season on the bench for the Roughnecks, as the team has named former Temple quarterback P.J. Walker as their starter to begin the season. Should Cook get another opportunity in relief, he'll hope it goes better than his last. Why you might remember him: Sammie Coates was a standout receiver at Auburn during his college career. Taken by Pittsburgh in the third round of the 2013 draft, Coates worked his way into the third receiver spot for the Steelers behind Antonio Brown and Markus Wheaton by 2016.

After the Steelers added JuJu Smith-Schuster in 2017, Coates was the odd-man out and was traded to the Cleveland Browns where he played for one season, before ending his time in the NFL with brief stints with the Texans and Chiefs. Why you might remember him: Kony Ealy was a promising prospect coming out of Missouri, taken in the second round of the 2014 draft by the Carolina Panthers.

After two years of regular playing time with the Panthers, Ealy was traded to the Patriots in 2017. New England waived him, leaving him to bounce across the league with time spent with the Jets, Cowboys, and Raiders, but struggled to find an active roster spot for himself.

At 28, an impressive showing in the XFL could mean another shot in the NFL next year. Why you might remember him: Josh Johnson is a true journeyman quarterback, having spent time with the Buccaneers, 49ers, Browns, Bengals, Jets, Colts, Bills, Ravens, Giants, Texans, Raiders, Redskins, and Lions.

A regular practice squad player and sometimes backup, Johnson finally won his first game as a starting quarterback in 2018 with Washington, 11 seasons into his NFL career.

Once he returns from injury, Johnson is expected to be the Wildcats starting quarterback, giving him a chance to show the talent that helped him through such a long NFL career. Why you might remember him: Nick Novak spent 13 years bouncing around the NFL with the Bears, Cowboys, Redskins, Cardinals, Chiefs, Chargers, Jets, and Texans.

As the AAF showed last year, kickers have a unique opportunity to prove themselves playing spring football, with several Alliance special teamers earning NFL tryouts after the league folded.

Novak will try to follow in their footsteps this year. Why you might remember him: Matt McGloin was a solid quarterback at Penn State, becoming the first Nittany Lion quarterback to start as a walk-on since 1949.

In the NFL, he struggled, serving as a backup quarterback in Oakland for four seasons before brief jobs with Eagles, Texans, and Chiefs.

Why you might remember him: Joe Horn Jr. went undrafted in 2019, signing with the Baltimore Ravens through training camp before ultimately being cut before the start of the season.

The son of the four-time Pro Bowl wide receiver that shares his name, the younger Horn will look to find similar success. Why you might remember him: Brandon Silvers played his college ball at Troy University, throwing for an impressive 10,677 yards with a 64.4% completion rate over four years. Silvers went undrafted in 2018, spending training camp time with the Saints before getting cut at the start of the year.

Silvers was impressive in the AAF, working his way from the bottom of the depth chart for the Memphis Express past Christian Hackenberg and Zack Mettenberg to finally earn the starting job in one of the final weeks of the league's existence.

With the Dragons, Silvers begins the year as the starter, having somewhat surprisingly won the job over former Seahawks quarterback B.J. Daniels. Why you might remember him: After going undrafted out of Houston in 2016, Kenneth Farrow worked his way onto the Chargers and earned a spot as the team's third running back. He eventually found the field after a few injuries in front of him on the depth chart.

Farrow also played in the AAF last year for the San Antonion Commanders, where he rushed for an impressive 142 yards on 30 carries in a Week 4 win over the Birmingham Iron. Why you might remember him: Will Sutton was an All-American and two-time Pac-12 Defensive Player of the Year during his career at Arizona State. He was drafted in the third round of the 2014 draft by the Chicago Bears.

After an ankle injury in Week 10 of the 2016 season, Sutton was placed on injured reserve, and cut in the following offseason.

Sutton played well for the Arizona Hotshots in the AAF. Why you might remember him: Jordan Ta'amu started for Ole Miss in 2019, throwing for 3,918 yards, 19 touchdowns, and eight interceptions on the year.

After going undrafted, Ta'amu spent training camp with the Houston Texans, but couldn't make the final roster. With the St. Louis BattleHawks, he beat out fellow quarterbacks Nick Fitzgerald and Taylor Heinicke for the starting job.

Why you might remember him: Will Hill won a national championship with the Florida Gators before beginning a journeyman career in professional football. Hill spent time with the Ravens and Giants of the NFL, the Hamilton Tiger-Cats of the CFL, the Arizona Rattlers of the AFL, and the Orlando Apollos of the AAF.

Now with the XFL's BattleHawks, he might be the most well-traveled veteran in the league. Why you might remember him: Marquette King became beloved for his swagger as a punter for the Oakland Raiders.

Despite his fun-loving attitude and a second-team All-Pro selection in 2016, King eventually fell out of the NFL.

While the XFL isn't emphasizing its punting, King is still a player well worth watching. Why you might remember him: Aaron Murray threw 121 touchdowns in his career at Georgia, leading the SEC all-time list over names like Peyton Manning, Tim Tebow, and Tua Tagovailoa.

He was taken in the fifth round of the 2015 draft by the Kansas City Chiefs and would go on to spend time on numerous practice squads around the league. In 2019, he played in the AAF for the Atlanta Legends, leading the team to their first win after starting quarterback Matt Simms went down with an injury in Week 4. Why you might remember him: Quinton Flowers played quarterback during his college career at USF but got more interest from NFL teams as a running back.

While he ultimately didn't make the Bengals roster, the Vipers have him listed as a running back as well, so it seems likely he'll stick with the position for now.

That said, there's a good chance you'll see Flowers used in some trickeration during the Vipers season.

Video shows how casually Patrick Mahomes called the game-changing play of the Super Bowl, and it all happened thanks to a 49ers challenge