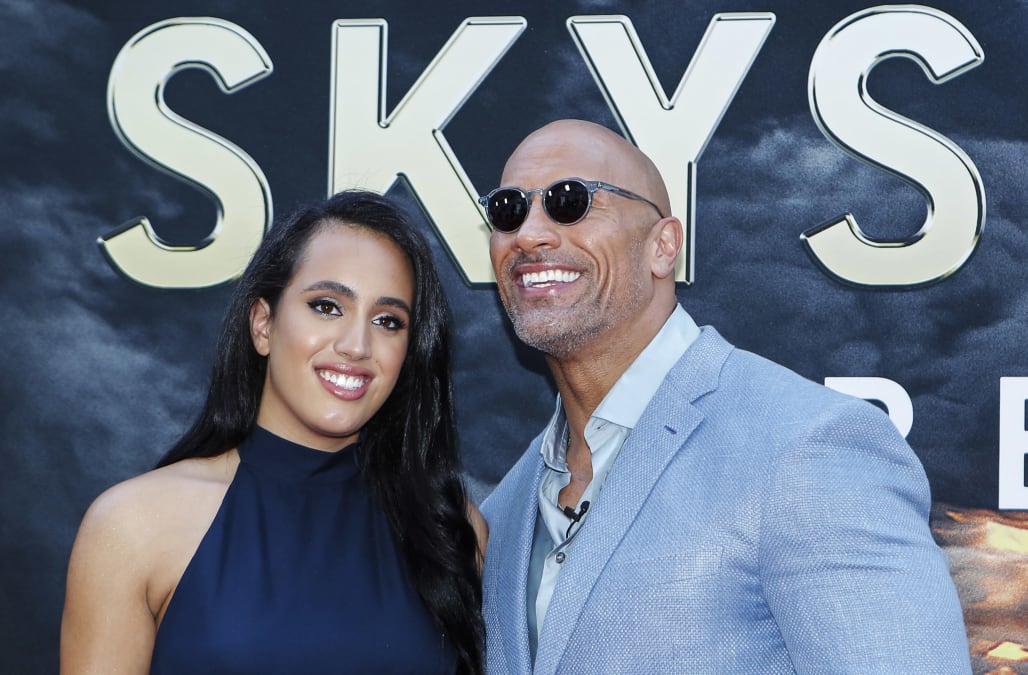 Simone Johnson, the 18-year-old daughter of the professional wrestling legend-turned-actor, has begun training at the WWE Performance Center in Orlando, Fla., the company announced today.

“It means the world to me,” Johnson said in a release provided by WWE. “To know that my family has such a personal connection to wrestling is really special to me and I feel grateful to have the opportunity, not only to wrestle, but to carry on that legacy.”

BREAKING: @SimoneGJohnson, daughter of @TheRock and @DanyGarciaCo, has reported to the WWE Performance Center to begin training. #WWENow@WWEPCpic.twitter.com/XCziD2K07a

RELATED: Take a look at Dwayne 'The Rock' Johnson and his children:

Dwayne Johnson and his children
Skin to skin. Our mana. Blessed and proud to bring another strong girl into this world. Tiana Gia Johnson came into this world like a force of nature and Mama @laurenhashianofficial labored and delivered like a true rockstar. I was raised and surrounded by strong, loving women all my life, but after participating in baby Tia’s delivery, it’s hard to express the new level of love, respect and admiration I have for @laurenhashianofficial and all mamas and women out there. Word to the wise gentlemen, it’s critical to be by your lady’s head when she’s delivering, being as supportive as you can.. holding hands, holding legs, whatever you can do. But, if you really want to understand the single most powerful and primal moment life will ever offer - watch your child being born. Its a life changer and the respect and admiration you have for a woman, will forever be boundless. And to my third and youngest daughter, Tiana Gia - like I did when your two older sisters Simone Alexandra and Jasmine Lia were born, you have my word, I’ll love, protect, guide and make ya laugh for the rest of my life. Your crazy dad has many responsibilities and wears many hats in this big ol’ world, but being your dad will always be the one I’m most proud to wear. Oh and one more thing.. you’re gonna love rollin’ in daddy’s pick up truck. #TianaGiaJohnson🌺 #3rdDaughter #BlessesAndGratefulMan #ImInTROUBLE
Dwayne The Rock Johnson and Simone Alexander Johnson (Photo by John Parra/WireImage)
Dwayne The Rock Johnson and Simone Alexander Johnson (Photo by John Parra/WireImage)
Surrounded by beautiful (and relentless;) estrogen and wouldn’t have it any other way. Boundless gratitude to my baby girls Simone and Jasmine for always being my greatest anchors. I love and got you for life. #NationalDaughtersDay❤️⚓️
Our Jasmine Lia would like to make a big announcement - IT’S A GIRL! 🌺 @laurenhashianofficial and I are boundlessly grateful for this blessing as this spring we’ll welcome our second baby. Plus, Jazzy is excited to boss around and protect her lil’ sis. And once again, big daddy is completely surrounded by beautiful estrogen and loving, powerful female mana. All girls. One dude. And a boy dog. I wouldn’t have it any other way. #ItsAGirl #GratefulMan #TequilaTime 🌺🙏🏾🥃
MALIBU, CA - JULY 29: Dany, Simone and Actor Dwayne Johnson arrive at the Summer On The Pier Benefiting 'The Rock' Foundation Event on July 29, 2007 in Malibu, California. (Photo by Amy Graves/WireImage)
NEW YORK - JUNE 11: (L-R) Dany Garcia, daughter Simone Alexander and ex-husband, actor Dwayne 'The Rock' Johnson attend the 2009 I Have A Dream Foundation Spring Gala at 583 Park Avenue on June 11, 2009 in New York City. (Photo by Charles Eshelman/FilmMagic)
Family prayer of gratitude 🙏🏾 (and laughs) in celebrating my mom’s 69th Birthday! My fav part of this moment is our baby daughter Jasmine, thinks we’re playing the game where daddy pretends to be be asleep so that’s why she screams, “WAKE.. AWAKE!” then a few seconds later after I kiss her head and place my hand over hers, she starts biting my hand to get my attention (just like her mama @laurenhashianofficial 😂❤️). Thank you Chef Evelyn for leading a beautiful and uplifting prayer in strong mana. We almost lost my mom to cancer 10yrs ago - she survived. Every day we’re a grateful family to have her and all our loved ones around us. Amen. #WakeAwake #Grateful #HappyBirthdayMom #Aiga
We’re extremely proud and thankful for this moment. Congratulations to our daughter @simonegjohnson on being selected as the very first #GoldenGlobes AMBASSADOR. Thank you to our friends and colleagues of the #HFPA for recognizing her value and voice. An amazing and cool honor to rep our community and the #Globes75. So much alofa and pride Xo D, @laurenhashianofficial @danygarciaco @daverienzi 👏🏾👏🏾🙏🏾❤️
HOLLYWOOD, CA - APRIL 01: Actor Dwayne Johnson, mom Ata Johnson, daughter Simone Alexandra Johnson and Lauren Hashian arrive at the Los Angeles premiere of 'Furious 7' at TCL Chinese Theatre IMAX on April 1, 2015 in Hollywood, California. (Photo by Gregg DeGuire/WireImage)
BEVERLY HILLS, CA - JANUARY 10: 73rd ANNUAL GOLDEN GLOBE AWARDS -- Pictured: (l-r) Actor Dwayne Johnson and Simone Johnson arrive to the 73rd Annual Golden Globe Awards held at the Beverly Hilton Hotel on January 10, 2016. (Photo by Alberto Rodriguez/NBC/NBCU Photo Bank via Getty Images)
HOLLYWOOD, CA - NOVEMBER 14: Actor Dwayne Johnson (R) and his daughter Simone Alexandra Johnson (L) attend AFI FEST 2016 Presented By Audi - Premiere of Disney's 'Moana' at the El Capitan Theatre on November 14, 2016 in Hollywood, California. (Photo by Barry King/WireImage)
Actor Dwayne 'The Rock' Johnson and his daughter Simone attend Paramount Pictures' World Premiere of 'Baywatch' on Miami Beach, Florida on May 13, 2017. / AFP PHOTO / RHONA WISE (Photo credit should read RHONA WISE/AFP/Getty Images)
MIAMI, FL - MAY 13: Dwayne Johnson and Simone Johnson attend Paramount Pictures' World Premiere of 'Baywatch' on May 13, 2017 in Miami, Florida. (Photo by Jason Koerner/Getty Images)
HOLLYWOOD, CA - JULY 23: Actor Dwayne Johnson (L) and daughter Simone Alexandra Johnson attend the premiere of Paramount Pictures' 'Hercules' at the TCL Chinese Theatre on July 23, 2014 in Hollywood, California. (Photo by David Livingston/Getty Images)
MIAMI BEACH, FL - JULY 14: Jasmine Johnson and Dwayne Johnson (R) attend the HBO Ballers Season 2 Red Carpet Premiere and Reception on July 14, 2016 at New World Symphony in Miami Beach, Florida. (Photo by Sergi Alexander/Getty Images for HBO)
MIAMI BEACH, FL - JULY 14: Jasmine Johnson and Dwayne Johnson (R) attend the HBO Ballers Season 2 Red Carpet Premiere and Reception on July 14, 2016 at New World Symphony in Miami Beach, Florida. (Photo by Aaron Davidson/Getty Images for HBO)
What a morning for our ohana! Very proud of my first born @simonegjohnson carrying the torch for our industry’s #GoldenGlobes as the first ever #GoldenGlobesAmbassador. I’m also super impressed this 16yr old got up at 2am this morning to get ready — a full 2hrs before her maniac papa bear dad gets up to workout. 🤣👏🏾🤙🏾. #OurDNA #GoldenGlobesAmbassador #Nominations #75thGoldenGlobes
Up Next

The Performance Center in Orlando is the first step for budding WWE stars. Since moving into the realm of talent development, Paul “Triple H” Levesque has overseen the creation of the performance center and helped usher new talent into WWE, specifically the NXT brand.

“Simone Johnson’s unbridled passion and incredible drive has earned her a coveted spot training with the elite athletes from around the world at the WWE Performance Center,” Levesque said in the release. “Not only does Simone now have an opportunity to cultivate and display her passion for WWE within the Performance Center, but she’ll carry on the tradition of her incredible family lineage while creating her own impact as WWE’s first fourth generation Superstar.”

Johnson will train alongside longtime WWE coaches Matt Bloom and Sara Amato in Orlando. According to WWE’s announcement, Johnson has expressed an eagerness to learn the trade.

“She’s hungry to learn and picks the coaches’ minds, and the veteran Superstars’, as well,” Bloom said. “She’s not going to rest on her laurels. It’s been a short time, but she’s been crushing it.”

“Simone is a wonderful girl,” Amato added. “She’s like a sponge, it’s pretty amazing. She knows what it takes to succeed and all the hard work and sacrifice that goes into it. I wouldn’t have expected anything less.”

The announcement came shortly after WWE revealed it will hold WrestleMania 37 in Hollywood in March 2021.