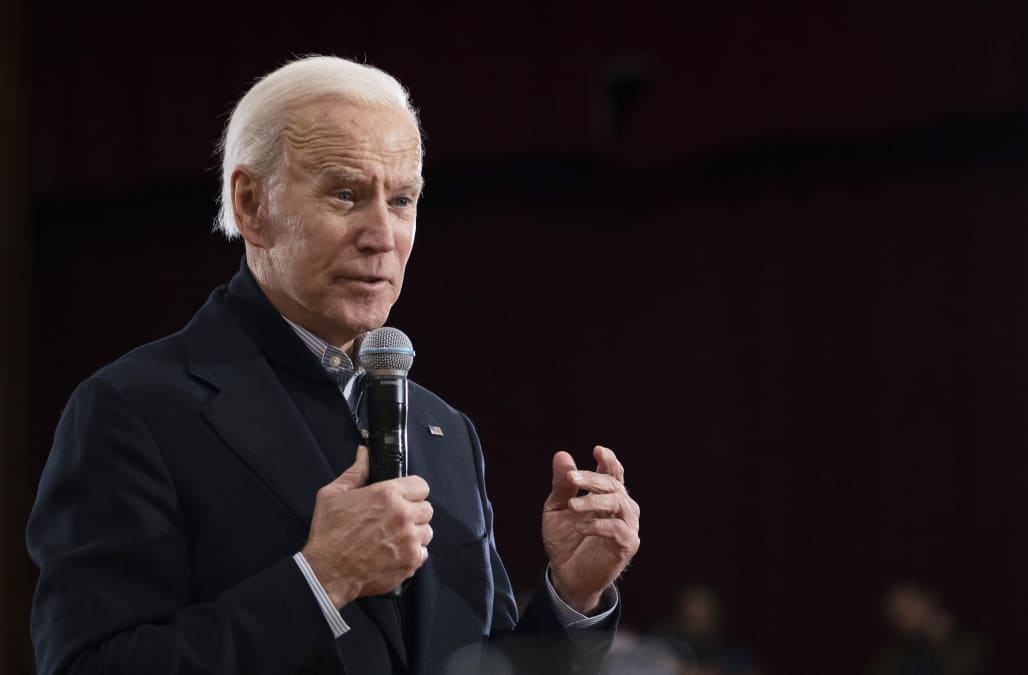 MANCHESTER, N.H. (AP) — Democratic presidential candidate Joe Biden and his top backers are downplaying expectations on the eve of New Hampshire’s first-in-the-nation primary, while his rivals for the nomination look to the Granite State for a new springboard.

“You’ve got to get 1,900 delegate or more, and this is just getting started,” Biden said Monday on CBS, repeating his argument that the first two overwhelmingly white states in Democrats’ nominating process will not determine the nominee of a racially diverse party.

No result in Tuesday’s primary, Biden said, “knocks you out of the box.”

Yet Biden’s challenge in the opening states highlights a larger concern for Democrats as they look for a standard-bearer to take on President Donald Trump: No would-be nominee has proven an ability to build a strong coalition across the party’s various racial, ethnic and ideological factions, and that situation is muddled further by the vote-tabulation melee in last week’s Iowa caucuses that left both Bernie Sanders and Pete Buttigieg claiming victory.

Trump, meanwhile, is eager to cast a shadow over the entire Democratic field as he heads to Manchester for a Monday evening rally to continue his victory-and-vengeance tour following Senate votes last Wednesday that acquitted Trump on two impeachment charges. Trump lost New Hampshire in 2016 by fewer than 3,000 votes out of more than 743,000 cast, and the state is among several his reelection campaign believes it can flip in November.

The Republican president’s supporters began lining up Sunday, and the crowd was growing Monday morning despite freezing, wet weather. Trump managed a similar scene in Iowa days ahead of the caucuses, drawing thousands of boisterous supporters who contrasted with a lower-than-expected caucus turnout for Democrats.

Against that backdrop, Biden insisted Monday that he remains well-positioned for the nomination and to defeat Trump in November. He pointed to endorsements from the International Brotherhood of Electrical Workers and Michigan’s legislative black caucus that he’s gotten since his bad finish in Iowa. “I’m still leading nationally,” the former vice president told CBS, referring to recent national polls.

Indeed, no Democrats have shown an ability to separate themselves from the pack.

Sanders, the Vermont senator, and Buttigieg are vying in New Hampshire for momentum that could dent Biden’s claims to national support. But Sanders, a democratic socialist, has virtually no support from the party’s center-left core, and some establishment figures openly fret about the prospects of Sanders leading the ticket in November.

Buttigieg draws large crowds with his calls for generational change, but the 38-year-old former mayor of South Bend, Indiana, hasn’t demonstrated significant support from African American or Latino voters, who will become significant parts of the Democratic electorate in the states that follow New Hampshire. And several of his rivals, Biden included, have started hammering his comparatively thin resume.

In Plymouth on Monday, a top Buttigieg backer met that criticism directly to open a Buttigieg event. “He has an executive’s temperament. It’s not a legislative job,” said Gary Hirshberg, an influential New Hampshire Democrat who was a key early supporter of Barack Obama’s 2008 campaign. “Pete Buttigieg has more executive experience than Barack Obama did before he was president.”

Racial diversity is also a question for Minnesota Sen. Amy Klobuchar. She’s trying to build on a strong debate performance last Friday and a subsequent fundraising surge, and she could deliver Biden a new blow if she leapfrogs him in New Hampshire after trailing him in Iowa. But it’s unclear whether her campaign has the national reach to capitalize on any newfound momentum in the short window between New Hampshire and the March 3 Super Tuesday slate, when more than a third of Democrats’ approximately 4,000 pledged delegates will be up for grabs.

Massachusetts Sen. Elizabeth Warren, meanwhile, has shown flashes of a broad coalition, as she tries to compete with Sanders on the party’s left flank and with Buttigieg for more moderate white college graduates. She’s added a relatively new argument in New Hampshire, pitching herself as the candidate who can best unify the party. But she and Biden both face a potential money crunch if donors are spooked by the results Tuesday.

Beyond New Hampshire, billionaire Michael Bloomberg continues his unusual strategy of skipping the four states that vote in February and plowing hundreds of millions of dollars into Super Tuesday states. Bloomberg’s centrist candidacy hinges largely on Biden underperforming and the proposition that neither Buttigieg nor Klobuchar can fill the gap.

Kate Bedingfield, Biden’s deputy campaign manager, dismissed that possibility Monday as she addressed reporters in Manchester. “From the outset, our campaign has argued that no candidate has been the Democratic nominee for president since 1992 without the support of African American voters, and Joe Biden is currently the candidate who has that support,” she said. “We believe that regardless of what happens tomorrow night we’re going to continue on with our plan to compete hard in Nevada, South Carolina, Super Tuesday and beyond.”

Despite the uncertainty facing his party, New Hampshire Democratic Chairman Ray Buckley said he remains optimistic about its chances in November, even going so far as to welcome Trump’s Monday visit amid his would-be challengers’ last-minute scramble.

“I think he is giving an enormous boost for the Democratic candidates by reminding people why it’s so important to vote,” Buckley told reporters Monday. “His ego can’t stand the idea of something going on and he’s not in the middle of it. It has backfired on him before, and I believe it’s going to backfire on him this time.”

More from Aol.com:
Nevada Democrats will use an iPad program to avoid an Iowa-like disaster in its upcoming caucus
Bernie Sanders walks back promise to release 'comprehensive' medical records
How a New Hampshire family spent Andrew Yang's 'Freedom Dividend'