Trump claims Pelosi broke the law by ripping up his State of the Union speech. That's false. 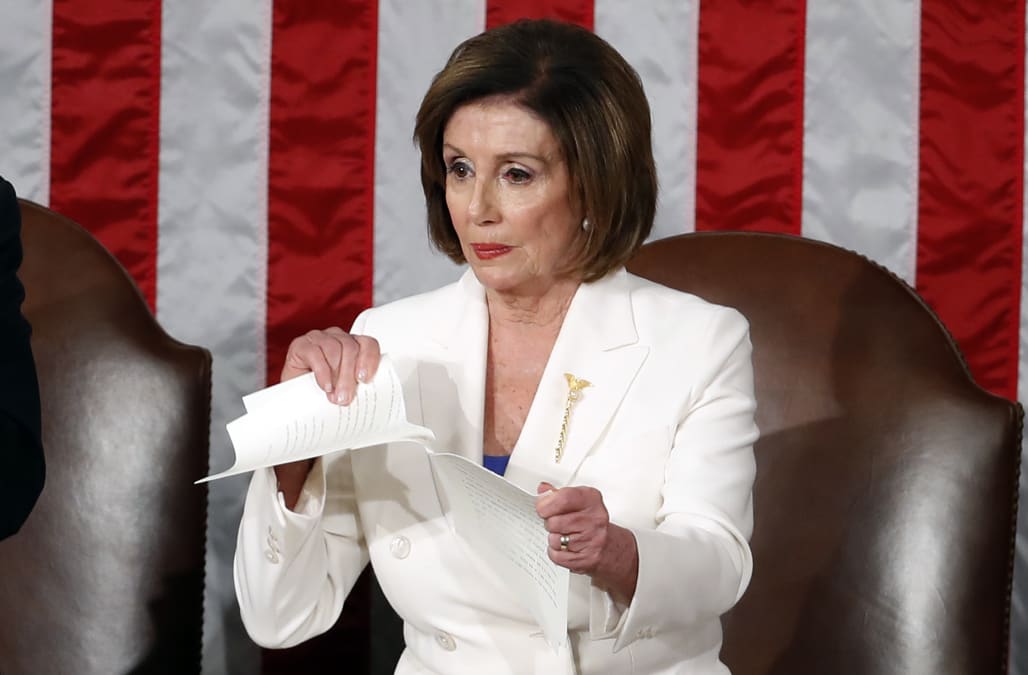 President Donald Trump claimed Friday that House Speaker Nancy Pelosi "broke the law" when she tore up her copy of his State of the Union address on Tuesday night.

"I thought it was a terrible thing when she ripped up the speech. First of all, it’s an official document, you’re not allowed, it’s illegal what she did, she broke the law," Trump told reporters on the White House South Lawn Friday. "That was terrible. It was a terrible — so disrespectful to our country, and actually very illegal, what she did."

The president appears to be echoing Charlie Kirk, founder and president of conservative student organization Turning Point USA, who argued in a tweet that Pelosi had violated the law prohibiting the mutilation of government records.

But legal experts say Pelosi, D-Calif., was legally in the clear.

“The simple answer is no, it doesn’t violate the law," said Gregory Magarian, professor of law at Washington University School of Law in St. Louis, Missouri. "The law that Kirk cited... it applies to government documents, official government documents that have been filed with some government office like the National Archives."

"This is just a copy of a presidential speech that Trump handed to Pelosi," Magarian added.

And even if that law — or any other — did apply, he continued, the Constitution’s Speech or Debate clause would protect Pelosi's actions because she was acting in her role as Speaker of the House.

The clause is an “ironclad protection to make sure that the executive branch can’t go after members of Congress for what they do in the course of their legislative duties,” he said.

As is custom, Trump had given Pelosi a copy of his remarks before he began his State of the Union address, delivered from the lectern at the front of the House chamber Tuesday evening. But as soon as he was finished and while Republicans were cheering his remarks, she stood up behind the president and ripped the speech papers in half.

Pelosi told reporters Wednesday that she felt "liberated" after the act.

Pelosi said that she had extended a "hand of friendship" to the president as he stepped up to the House chamber's dais on Tuesday to welcome him — but he did not take her hand.

Pelosi said the president's decision to not shake her hand had nothing to do with her later ripping up his speech. She said she is a speed-reader, and once she got through the first quarter or third of the address, "I started to think there has to be something that clearly indicates to the American people that this is not the truth."

"He has shredded the truth in his speech, he shredded the Constitution in his conduct, I shredded his state of his mind address," she said.

Laurence Tribe, a professor of law at Harvard Law School and Constitutional scholar, also weighed in to the publication Law and Crime.

“What a dumb idea! Not even Bill Barr would fall for that ludicrous misapplication of the federal law criminalizing mutilation of government records," he told the publication.