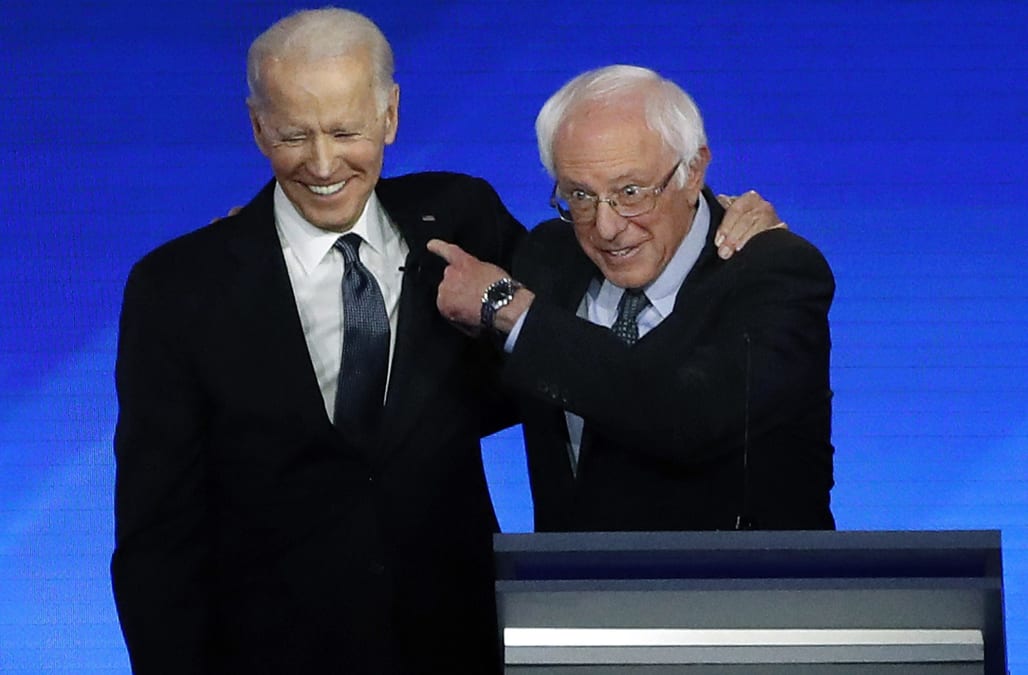 Seven Democratic presidential candidates gathered in Manchester, N.H., on Friday night, sharing a stage for the first time since the Iowa caucuses. The much-delayed and disputed results from Iowa have already altered the race: Joe Biden, who has been the national frontrunner for months, had to square off against his rivals after finishing fourth in the caucus, while Sen. Bernie Sanders and former South Bend, Ind. Mayor Pete Buttigieg faced increased scrutiny after a virtual tie for first place, and with polls showing them vying for the lead in New Hampshire. Sen. Elizabeth Warren, Sen. Amy Klobuchar, Tom Steyer and Andrew Yang were all hoping to make it into the top three.

Here are five key takeaways from the debate, as the candidates head into the final weekend of campaigning.

The former vice president wasted little time lowering expectations for the New Hampshire primary, answering the very first question of the night by saying he expected to do poorly on Tuesday night after his disappointing showing in Iowa.

“I took a hit, and I’ll probably take a hit here,” said Biden, noting that Sanders and Warren represent neighboring states. Biden said he expected to do better in the later states based on his support from black voters, although he got some pushback on that by Tom Steyer, who has polled well in South Carolina after spending millions there.

Biden was more animated and focused than he has been in prior debates. He directly attacked Sanders’s record on gun legislation as being out of step with the party, repeating an attack he made at a campaign event on Wednesday. (Sanders responded that his views have changed.) Bid earned a viral moment when he urged the crowd to stand and applaud Lt. Col. Alexander Vindman, the National Security Council official who was dismissed by President Trump Friday after testifying against him in the impeachment investigation. Biden also drew on the legacy of the man he served under in an attempt to defend himself against criticisms from Buttigieg.

“So I don’t know what about the past of Barack Obama and Joe Biden was so bad,” Biden continued. “What happened? What is it that he wants to do away with?”

An ominous sign for Biden was that his rivals aimed most of their attacks at Buttigieg, suggesting they see the former mayor as the candidate to beat. Klobuchar repeatedly mentioned Buttigieg’s lack of experience, questioned his record on health care and hit him over his dismissal of the impeachment trial. “You said it was exhausting to watch and that you wanted to turn the channel and watch cartoons,” she said. Sanders went after Buttigieg on his fundraising, saying, “I don’t have 40 billionaires, Pete, contributing to my campaign — coming from the pharmaceutical industry, coming from Wall Street.” Buttigieg responded that Democrats will need all the support they can get to defeat Trump.

The roughest moment of the night for Buttigieg came at the hands of the moderators and Warren. ABC News’ Linsey Davis pushed Buttigieg on a spike in marijuana arrests for black South Bend residents after he took over as mayor. Buttigieg tried to duck the question before grudgingly conceding that the spike was due to a focus on gang activity.

The moderator turned to Warren and asked her if she felt Buttigieg had answered the question.

For the most part, Warren otherwise avoided attacking her fellow candidates, with one exception: She saved some heated words about former New York City Mayor Michael Bloomberg attempting to buy the election.

3. A hug for Sanders

While the candidates weren’t afraid to contrast records and experience, there were limits to how far the Democrats would go in criticizing one another. When asked if nominating Biden could be a danger considering he and his son Hunter could potentially be under investigation by Republicans, Buttigieg dismissed the theory.

“No. We’re not going to let them change the subject,” said Buttigieg. “This is not about Hunter Biden or Vice President Biden. This is about an abuse of power by the president.”

Sanders was also — literally— embraced when moderators raised Hillary Clinton’s remark that “nobody likes him.” “I like Bernie just fine,” said Klobuchar, while Biden stepped over and hugged his former Senate colleague. Klobuchar then discussed how she and Sanders had worked together on prescription drug pricing, an implicit rebuke of Clinton’s ongoing feud with her 2016 rival.

Sanders returned the favor later in the night when asked about attacks from Ohio State Sen. Nina Turner on Biden’s record on African-Americans. Sanders said that Biden was his friend and that Turner was referring only to the earlier parts of Biden’s career.

4. With no blacks on stage, race was still a topic

A heated exchange between Buttigieg and Warren on policing in black communities led to an extended discussion on race. Steyer brought up his support for slavery and Jim Crow reparations, and called on Biden to disavow comments from one of his South Carolina campaign surrogates that the billionaire was buying support in the state.

Warren said that a wealth tax would help close the racial wealth gap and criticized her party for not living up to prior promises.

“Year after year after year, election after election after election, Democrats go to people in the black community and say, ‘Boy, we really care about these issues. Racism is terrible. We all want to do something.' And then somehow the problem just seems to keep getting worse,” said Warren. “Well, I think it’s time we have real concrete plans that are going to make a difference in people’s lives.”

The conversation occurred with only one person of color on the stage — Yang, who is Asian-American — and no blacks or Hispanics, following the departures of Sen. Kamala Harris, Sen. Cory Booker and former Housing Secretary Julián Castro from the race. (Former Massachusetts Gov. Deval Patrick, who is African-American, is still running but failed to qualify for the debate.)

5. Can Klobuchar finally get a bump?

It happens after almost every Democratic debate: Klobuchar turns in what pundits rate as a strong performance, she gets praised in the media, and it makes little to no difference in her polling or fundraising. Klobuchar stuck to her message Friday night: Every time she’s been on the ticket in Minnesota, she does well in traditionally Republican areas, pulling down-ballot Democrats up with her. She had a strong closing statement, repeatedly contrasted her experience with Buttigieg and didn’t face questions about her record as a prosecutor that have been raised by civil-rights advocates in Minneapolis. After finishing fifth in Iowa and with limited support from nonwhite voters who play a larger role in upcoming states, Klobuchar likely needs a strong result in New Hampshire to stay in the race. We will find out Tuesday night if her attacks on Buttigieg were enough to curb his momentum among Granite State voters and give her a bump. Early returns were positive, as Klobuchar’s campaign said that she had raised more money during this debate than any prior one before it had even ended.

More from Yahoo News:
Polls show Biden’s campaign could be hitting the wall
Biden, after Iowa 'gut punch,' takes on rivals in New Hampshire
Buttigieg, fresh off his self-proclaimed win in Iowa, storms into New Hampshire