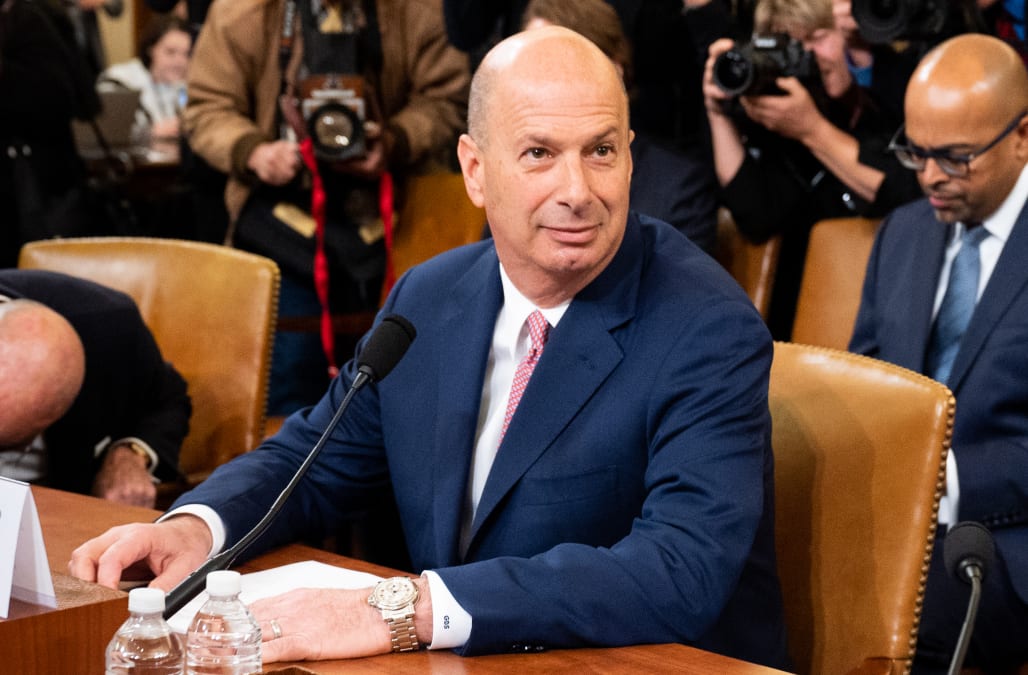 “I was advised today that the president intends to recall me effective immediately as United States Ambassador to the European Union,” Sondland said in a statement. He expressed gratitude to Mr. Trump “for having given me the opportunity to serve.”

Sondland’s dismissal came just hours after Lt. Colonel Alexander Vindman, the top National Security Council official on Ukraine who also testified against Trump, was fired and escorted out of the White House by security.

As the impeachment hearings enter their second week - one of the most highly anticipated testimonies will be Wednesday’s appearance from Gordon Sondland, the US ambassador to the EU.

Unlike the other witnesses in the inquiry, Sondland is not a career diplomat versed in the protocols of the State Department or a foreign policy expert. He’s a Seattle businessman who gave a million dollars to Trump’s inauguration and later became Trump's pick for envoy to the European Union. But Sondland’s direct interactions with Trump, and testimony from other witnesses about his dealing with Ukraine, have put him front and center in the controversy, over whether Trump made aid to Ukraine contingent on opening an investigation into his political rival, Joe Biden.

Sondland was one of three officials - along with Kurt Volker, the former representative for Ukraine, and Energy secretary Rick Perry - to take the lead on American policy toward Ukraine after Trump abruptly removed the U.S. ambassador in Kiev, Marie Yovanovitch.

Alexander Vindman, a U.S. Army lieutenant colonel and Ukraine expert on the NSC, said he heard Sondland explicitly press Ukrainian officials to investigate Joe Biden and his son, according to a transcript of his private testimony.

And On Friday David Holmes, a U.S. embassy official in Kiev, told lawmakers in closed-door testimony, that he overheard a phone call between Trump and Sondland, in which the ambassador told the president his Ukrainian counterpart was ready to carry out the investigations. The phone call occurred on July 26, one day after the phone conversation between Trump and Zelenskiy.

The top US diplomat in Ukraine Bill Taylor discussed that call in his public hearing.

Sondland appeared in released texts saying there was no quid pro quo in withholding aid. But after testifying behind closed doors, he then had to revise his testimony to say that by September he had come to view a suspension of U.S. security aid as being held up as leverage to get Ukraine to commit.

Up until now – among the GOP's main defenses of Trump are that there was no quid pro quo, and that no witnesses has spoken directly to Trump about the withheld aid. Democrats hope Sondland could undercut those arguments..

He also implicated other top administration officials and Trump allies, including testifying that Trump gave “express direction” to work with his personal attorney Rudy Giuliani, who had been directly engaging with Ukrainian officials in the scheme.

Sondland also testified that he was instructed to brief administration officials about the scheme.

“Everyone knew. It was no secret,” he said. “Everyone was in the loop.”

In a largely party-line vote Wednesday, the Senate acquitted Trump on two articles of impeachment. Ever since, Trump has hailed the acquittal as a victory, repeated his common lines of attack (such as calling the impeachment inquiry a “hoax” and “witch hunt”) and gone on a vindictive streak, assailing lawmakers who voted for his impeachment in the House and conviction in the Senate.

More from HuffPost US:
White House set to remove army officer from NSC who testified In impeachment inquiry
Lindsey Graham figures when he dies, God will be cool with him acquitting Trump
Hillary Clinton reacts to Trump's impeachment acquittal on 'Ellen'