Polls show Biden’s campaign could be hitting the wall 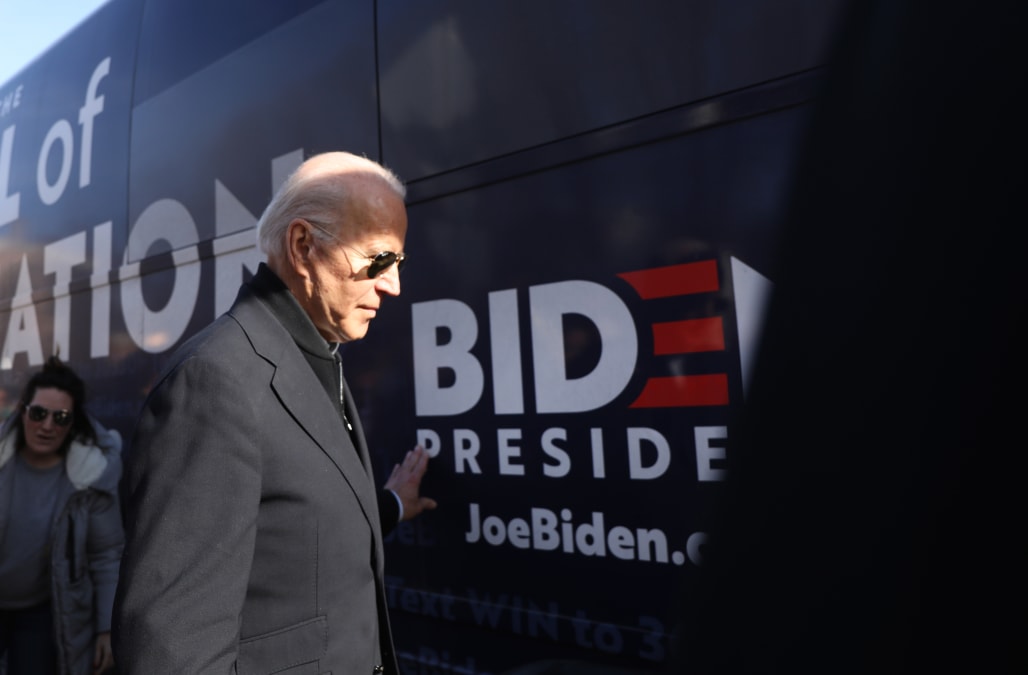 On Wednesday night, Joe Biden chartered a plane from Manchester, N.H., to his hometown of Wilmington, Del. He had no events scheduled Thursday in New Hampshire — one day before the high-stakes Democratic debate there and five days before the state’s crucial primary.

Perhaps the former vice president, who has described his distant fourth-place finish in Monday’s chaotic Iowa caucuses as a “gut punch,” cleared his schedule and flew home to prep for the debate. Perhaps after nearly a year of nonstop campaigning — with just five measly Iowa delegates to show for it — the 77-year-old statesman just wanted to sleep in his own bed for once. Perhaps it was both.

Either way, Biden may soon get to sleep at home every night. The state of his campaign is far shakier than his longtime lead in the national polls would suggest. In fact, it may already be on its last legs.

To be sure, Biden retains some advantages. His national polling leads persists. His singular emphasis on electability — the perception that he is best-suited to “beat” Donald Trump “like a drum” — matches what Democratic voters consistently tell pollsters they most desire in a nominee. And Biden has long held a significant lead among black Democrats, who dominate the upcoming South Carolina primary on Feb. 29 and will effectively pick its winner.

Yet upon closer examination, it’s also clear that each of these supposed strengths is starting to crumble.

Take Biden’s position in the polls. It has fallen nationally by more than a percentage point, on average, since his shellacking in Iowa. Bernie Sanders, who effectively tied Pete Buttigieg in the caucuses, is now within 3 percentage points of overtaking Biden — the closest Sanders has ever been to the national lead.

When you drill down on the state that matters most right now, New Hampshire, the picture is even worse. There, Biden was averaging 16.8 percent on Monday — good for second place behind Sanders, who hails from the neighboring state of Vermont. Now, after a series of dismal post-Iowa tracking polls have shown Biden in free fall, he has plummeted nearly 3 percentage points to 14.1 percent in a matter of days. Buttigieg, meanwhile, gained nearly 5 percentage points over the same period, and now leads Biden with roughly 18 percent support.

As for electability, voters have long told national pollsters that Biden is the best bet to beat Trump. But when actual Democrats who had actually been paying close attention got an actual chance to vote in Iowa on Monday, they picked someone else. According to the final entrance poll, a whopping 61 percent of Iowa caucus-goers said it was more important to nominate a candidate who could defeat Trump than it was to nominate a candidate they agreed with — and it was Buttigieg, not Biden, who won these “electability voters,” picking up 24 percent to Biden’s 23 percent. This dynamic was also reflected in the way supporters of candidates such as Amy Klobuchar and Tom Steyer “realigned” after their first choices didn’t hit Iowa’s 15 percent viability threshold. While Buttigieg gained nearly 6,000 votes after realignment— more than any other candidate — Biden lost nearly 2,000. “I expected to do better,” Biden said at a CNN town hall in Manchester, N.H., Wednesday evening. “And I expected that our organization would perform better.”

There are already signs that Biden could suffer a similar fate among black voters in South Carolina, his so-called firewall. For one thing, the caucus entrance poll shows that it was Sanders, not Biden, who won voters of color in Iowa. In 2016, Sanders got 34 percent of nonwhite voters to Clinton's 58 percent. This week, he won 43 percent of nonwhite voters, with no other candidate pulling even half of that. Even Buttigieg, who has struggled to appeal to African-Americans, outpaced Biden, 15 percent to 13 percent, among nonwhite Iowans.

Cracks are showing in South Carolina as well. Polling there is relatively scarce, but the most recent survey — the only one released this month — shows Biden’s overall lead shrinking to 5 percent from 11 percent in October. Back then, Biden was doubling his closest competitor among black voters; in the latest survey, his advantage among African-Americans has narrowed to 6 percentage points. Just as worrisome is the fact that it’s the California billionaire Steyer who is now nipping at Biden’s heels among black voters. In October, Steyer was barely registering with the community in South Carolina; since then, he has spent millions of dollars courting them, and he has skyrocketed in the polls as a result. Likewise, New York billionaire Mike Bloomberg is pursuing a similar big-spending strategy in Super Tuesday states, and one recent poll found that his net favorability rating among black voters has soared from +4 points in November to +32 points today. All of which suggests that black voters aren’t as loyal to Barack Obama’s former vice president as it once seemed.

“African-American voters are fluid,” former Obama pollster Cornell Belcher told the Los Angeles Times. “They know and like Biden, but if it starts to look like he is not a good investment, they will move on.”

Individually, none of these flaws is necessarily fatal. But together they may be, because Biden also lacks the key resource that could counteract his ongoing slide: cash,and the organization and advertisements it can buy. Biden ended 2019 with $8.9 million cash on hand — less than Sanders ($18.2 million), Buttigieg ($14.5 million) or Elizabeth Warren ($13.7 million). Sanders just announced that January was his best fundraising month ever; in 31 days he raked in more money ($25 million) than Biden collected during the entire fourth quarter of 2019. Politico reported Thursday that in the midst of Biden’s New Hampshire decline, his campaign is redirecting resources to Nevada, which caucuses on Feb. 22 and where surveys show him tied with Sanders. But it may be too little too late. After Super Tuesday, Bloomberg is waiting to blow Biden out of the moderate lane. And he has already spent more than $300 million laying the groundwork.

For Biden, that’s the doomsday scenario: another poor result in New Hampshire, followed by a third rout in Nevada, where Sanders’s crack caucus team is sure to out-organize him. More than three weeks of negative news cycles eating away at his electability advantage. Black voters in South Carolina jumping ship — and a finish there that fails to meet expectations. Fundraising dries up. Then Bloomberg pounces three days later, on Super Tuesday.

“We believe South Carolina is our firewall and it is,” a Biden adviser told Politico. “But if we lose three straight in Iowa, New Hampshire and Nevada, the fire can jump the wall.”

Of course, none of this is a foregone conclusion. The Granite State has a contrarian tradition of bucking expectations and boosting underdogs. In 1992, the moderate Bill Clinton, damaged by reports of extramarital affairs, fell behind in the New Hampshire polls — then pulled off a surprise second-place finish after appearing with his wife, Hillary, on “60 Minutes” to refute the allegations. Clinton called himself “the Comeback Kid,” and the rest is history.

Sixteen years later, Hillary — the longtime frontrunner and establishment favorite — looked certain to lose in New Hampshire; some polls showed her trailing Obama by double-digit margins after his stunning Iowa victory. But when a voter in Portsmouth asked, “How did you get out the door every day? I mean, as a woman,” Clinton teared up. “This is very personal for me,” the candidate replied. “Not just political.” That rare tender moment redirected the narrative, and New Hampshire voters gave Clinton a second chance. On primary night, she defeated Obama by 2.6 percentage points.

And so it’s possible that the good, ornery people of New Hampshire decide to resurrect Biden at the last minute. Maybe he turns in a pivotal performance at Friday night’s debate, an 11th-hour forum that has been known to turn the tide before. Maybe his emotional account of his struggle to overcome stuttering, at a CNN town hall Wednesday, will do for him what Clinton’s moment of vulnerability did for her. Maybe he goes on to beat Buttigieg in New Hampshire, and Sanders in Nevada, and arrives in South Carolina with the wind at his back.

During an event Tuesday at an International Brotherhood of Electrical Workers hall in Concord, Biden seemed to acknowledge Iowa hadn’t gone the way he hoped — and that New Hampshire would now determine his fate.

“There’s nothing to come back from yet,” Biden said, almost willing himself to believe that that was true. “But I’d like you to rocket me out of here to make sure this thing works, OK?”

More from Yahoo News:
Biden, after Iowa 'gut punch,' takes on rivals in New Hampshire
Buttigieg, fresh off his self-proclaimed win in Iowa, storms into New Hampshire
After Iowa fiasco, New Hampshire matters more than ever