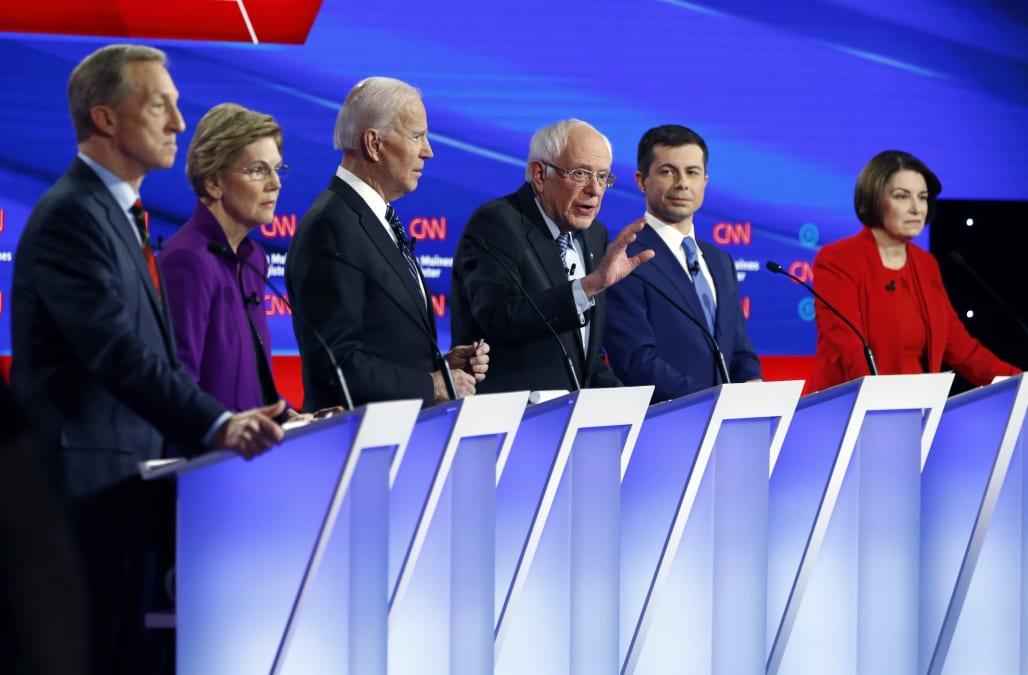 WASHINGTON (AP) — Pete Buttigieg and Bernie Sanders are nearly tied in the Iowa Democratic caucuses, with nearly all results counted in a contest marred by technical issues and reporting delays.

The race remained too early to call early Thursday with 97% of precincts reporting. Party officials were scrambling to verify the remaining results three days after Iowans gathered at caucus sites across the state to begin choosing which Democrat will take on President Donald Trump in November.

A new batch of results released just after midnight narrowed the margin between Buttigieg, the former mayor of South Bend, Indiana, and Sanders, the progressive senator from Vermont. Buttigieg has a lead of three state delegate equivalents out of 2,098 counted.

The deadlocked contest gives both Buttigieg and Sanders a burst of momentum as they seek to pull away from the crowded field. The nearly complete results show them leading Massachusetts Sen. Elizabeth Warren, with former Vice President Joe Biden and Sen. Amy Klobuchar trailing behind.

But the results in Iowa were muddied by the stunning breakdown of the caucus reporting process in a state that traditionally kicks off presidential nominating contests. Iowa officials initially attributed a delay in reporting results to technical problems with an app that precinct chairs were supposed to use to record votes, then to backlogs as those volunteers tried to call the party to submit their totals.

Even as the total number of results ticked up throughout the day Wednesday, obstacles remained. Some tally sheets were making their way to party headquarters in Des Moines through the mail, which contributed to the delay.

Much of the political world has already shifted its attention to next-up New Hampshire, which holds the first primary election in the Democrats' 2020 nomination fight on Tuesday. Both Buttigieg and Sanders are leading contenders there, as well.

The two men are separated by 40 years in age and conflicting ideology.

Their strength in Iowa put them in the crosshairs of rivals as the race shifted to New Hampshire. Biden, who fell far short of expectations in Iowa, cast both Buttigieg and Sanders as risky choices for Democrats, given the former mayor’s relative inexperience and the senator’s descriptions of himself as a socialist.

Sanders is making his second run for the White House. He surprised many Democrats in 2016 with his strong challenge to Hillary Clinton, but entered the 2020 contest as a front-runner. He’s topped the field in fundraising, despite eschewing high-dollar donors.

Sanders and his supporters raised issues with the primary process after the 2016 election, prompting the Democratic National Committee to make changes that affected the Iowa reporting regulations.

As a result, Iowa released three sets of data from the caucuses: the tally of voter preferences at the start of the caucus; their preferences after supporters of candidates who reached less than 15% made a second choice; and the results of state delegate equivalents.

The final alignment results are used to determine state delegate equivalents, which is the metric the AP has long used to call the winner of the caucus. Democrats pick their nominee based on delegate totals.

With 97% of precincts reporting, Sanders is leading in the first alignment results and has a narrower edge in the final alignment.