'Why didn't you stay in Mexico?': Latino dad heckled at community meeting on racism 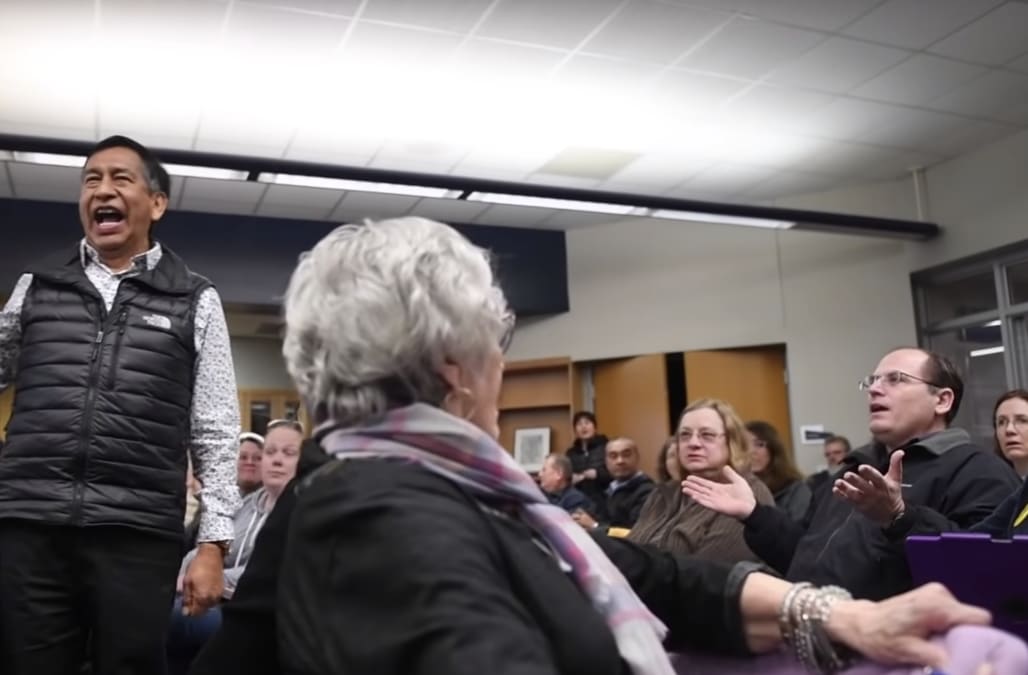 A community meeting meant to address concerns over racism in a Michigan school district appeared to become proof of the problem after a white parent suggested to a Latino father that he shouldn't have immigrated to the U.S.

Adrian Iraola, who came to the U.S. from Mexico and whose now-grown children went through the schools in Saline, recalled his son's experience of racism in the district.

"I went to his bedroom to say good night, and he was crying because of the abuse that he was enduring in this school system,” Iraola said at the school board meeting Monday in the largely-white district south on Ann Arbor.

Iraola was interrupted by a white parent, Tom Burtell, who said, “So why didn’t you stay in Mexico?”

Burtell’s statement drew audible shock and gasps from people in the audience, many of whom turned to face him, as shown on a video from MLive.com that had garnered almost 800,000 views by Wednesday morning.

One meeting attendee shouted at Burtell, “You need to leave.” Another said, “That’s disgusting,” in response to Burtell's comments.

“That’s indicative of what these kids are experiencing,” said still another.

Someone in the audience appeared to criticize those chastising Burtell, saying the meeting was a “platform for discussion,” to which Burtell responded, “That’s right.”

“Then explain yourself,” an audience member said to Burtell. “You interrupted [Iraola]. Take the mic.”

Iraola, still with mic in hand, then said, “He asked me a question, 'Why didn’t I stay in Mexico?' Because this is the greatest country in the world.”

Burtell, who said he has six children who have gone to the schools, shouted, “But you’re complaining about being here.”

The meeting Monday evening was held in response to racist Snapchat posts made by Saline High School students that were directed at black school football players, NBC Detroit affiliate WDIV reported. The posts included racial slurs and messages that said “WHITE POWER” and “THE SOUTH WILL RISE AGAIN.”

The Saline Area Schools district is affluent, with a median household income of about $107,000 among 28,000 residents, of whom 88 percent are white, 1 percent black and 3 percent Hispanic or Latino, according to National Center for Education Statistics figures for 2013-2017.

Burtell's comments drew condemnation from the both the school district's superintendent and a person who identified himself as Burtell's adult son.

Saline Area School Superintendent Scot Graden said, “This type of bigotry goes against all of the values and beliefs of our school system."

On Facebook, Matt Burtell, who said Tom Burtell is his father, said, "His views of hate in no way represent my own. I stand in solidarity with the refugees and immigrants of the world."

Iraola, who with his wife, Lori, runs a Mexican restaurant with a few locations in the area, later told WDIV that he thinks Tom Burtell's comments may have served to open people's eyes to racism in the community.

“I thank the gentleman for being vocal and expressing his opinion because it will make people realize that this is not a figment of imagination, it’s amongst us,” he said.

More from NBC News:
Nancy Pelosi's State of the Union rage is the energy Democrats need right now
Meredith Vieira's life-changing advice for women who want to make a career comeback
Plane breaks into pieces after skidding off runway in Istanbul