Pelosi rips Trump State of the Union speech in half 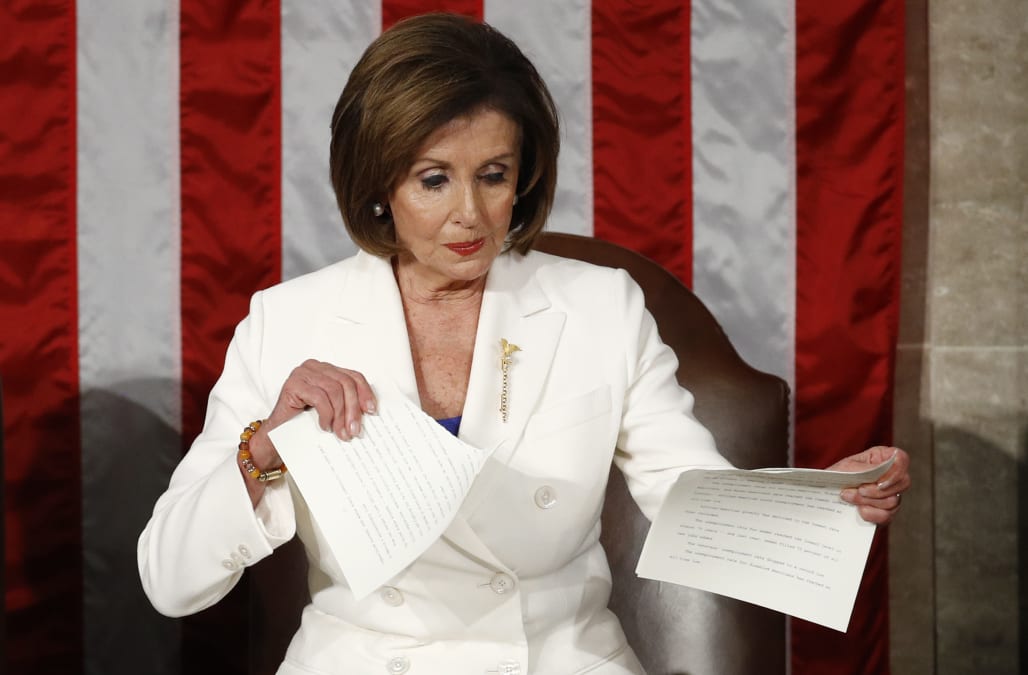 House Speaker Nancy Pelosi had a wordless reaction to President Trump’s combative State of the Union Speech on Tuesday — she tore her copy of it in half at the end of the address.

The extraordinary gesture of disdain exemplified the partisan divide lingering over Washington as the Senate prepares to vote Wednesday on the two articles of impeachment passed by the Democratic House. Republicans, who hold a 53-47 majority in the Senate, are considered certain to acquit him.

Trump handed Pelosi a copy of his speech before he read it but turned away from the speaker when she reached to shake his hand. Pelosi and Trump have reportedly not spoken since October, when the House began its impeachment inquiry into Trump’s efforts to coerce Ukraine to investigate former Vice President Joe Biden.

House Speaker Nancy Pelosi tears up her copy of #SOTU at the conclusion of the speech pic.twitter.com/l60G7iRatp

Except for a few passages, Trump’s speech was met with silence and occasional groans from the Democratic side of the chamber, while Republicans applauded loudly and enthusiastically.

“I tore it up,” Pelosi said as she was leaving the chamber. “Because it was a courteous thing to do considering the alternative. It was such a dirty speech."

The White House responded with a tweet mocking Pelosi:

One of our last surviving Tuskegee Airmen.

The survival of a child born at 21 weeks.

The mourning families of Rocky Jones and Kayla Mueller.

A service member's reunion with his family.

Some Democrats who attended the speech quickly rallied to Pelosi’s defense, calling out the president for what they viewed as a combative address.

That was a disgrace. I should not have gone.

I get it - presidents use their last SOTU to make the case for re-election. But that crossed a line.

Minutes after the House chamber had emptied, Pelosi tweeted about her interactions with Trump.