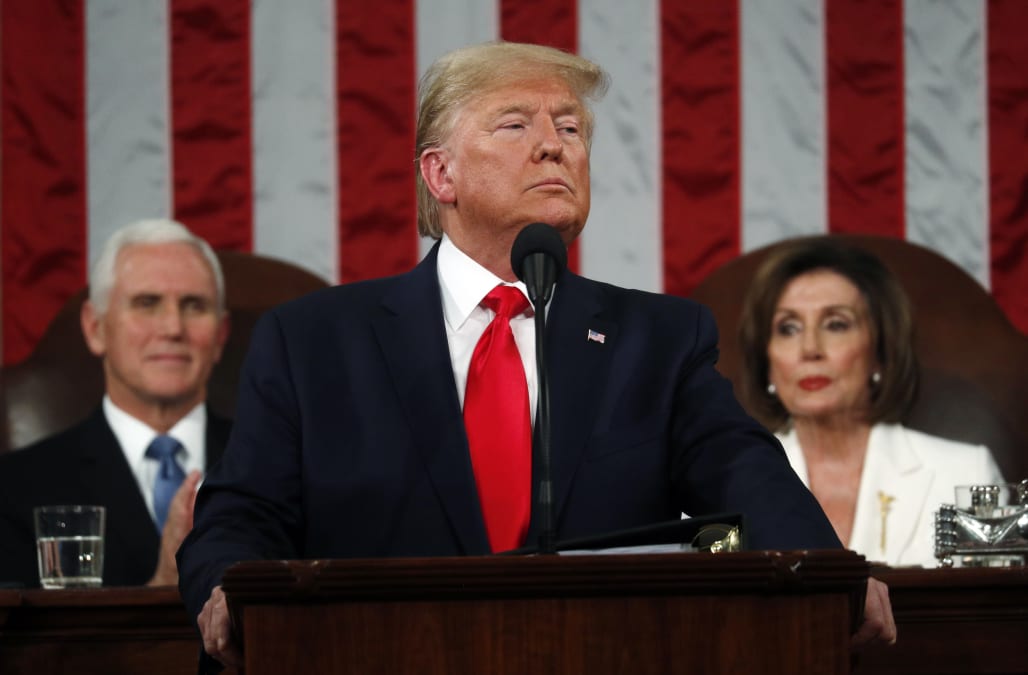 As the Senate impeachment trial nears its end, a new HuffPost/YouGov poll finds Americans saying, by an 8-point margin, that senators should have allowed witnesses first. The survey, taken following the Senate’s vote on Friday to block witnesses from testifying, finds that the public remains closely divided on the question of President Donald Trump’s removal.

Americans say, 42% to 34%, that the Senate made the wrong decision when it voted not to allow any witnesses in the impeachment trial.

Some earlier polls had found much broader support for calling witnesses, with even many Republicans supportive of the idea. In the wake of the Senate’s vote along almost entirely partisan lines, however, public opinion is now similarly polarized: 77% of Democrats and Democratic-leaning independents say the Senate made the wrong decision, while just 13% of Republicans and Republican-leaners say the same.

Both parties face negative ratings for their handling of the impeachment inquiry: Americans disapprove of Democrats’ conduct by an 8-point margin, and of Republicans’ actions by a 15-point margin. Those who’ve followed at least some news about the trial say, 50% to 40%, that Democratic senators are playing politics rather than making a good-faith attempt to get to the truth. By a somewhat wider margin, 57% to 28%, they say Republican senators are mostly playing politics as well.

Americans remain roughly divided on whether Trump should be ousted. In the latest poll, 44% say that Trump should be removed from office, and 41% that he should not be. Two earlier polls, conducted Jan. 22-24 and Jan. 29-31, found backing for Trump’s removal at 43% and 46%, respectively ― variation that’s within the range of previous HuffPost/YouGov polling. In FiveThirtyEight’s aggregate, support for removing Trump stands at about 48%. 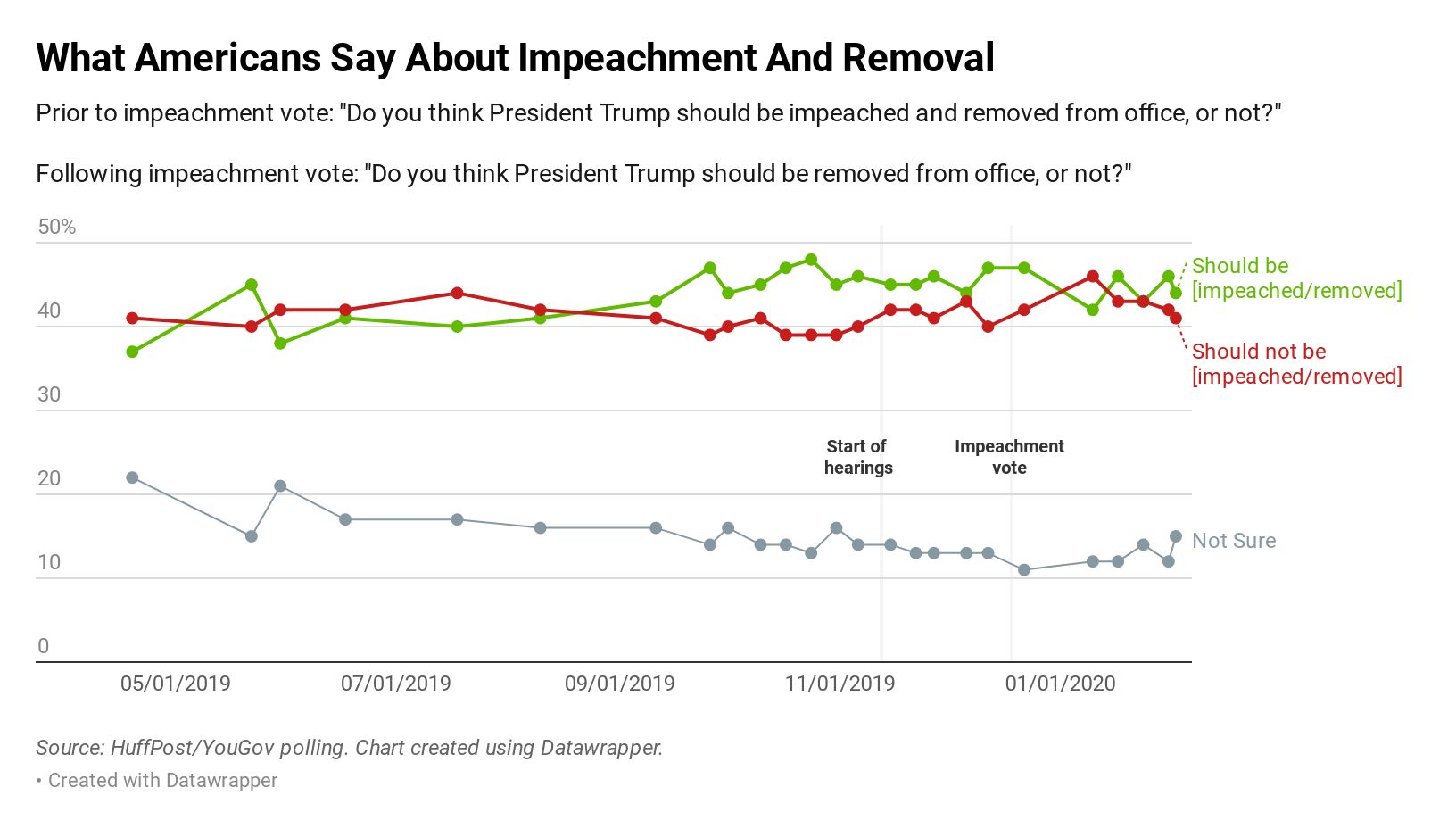 In the most recent poll, Americans say, 46% to 27%, that they think Trump withheld military aid to Ukraine in order to spur an investigation into the Biden family. Just 15% believe that such an action would be appropriate, with 26% saying that it’s inappropriate but not impeachable, 39% that it’s impeachable, and the rest that they’re unsure.

The trial has received near-universal public attention: 91% of Americans say that they’ve heard at least a little in the news about impeachment recently, and 82% that they’ve seen stories about the trial specifically. But the extent and nature of the media they’ve consumed varies widely. Just 38% say they’ve watched part or all of the trial, with the rest either catching clips of the highlights, following stories that analyzed the proceedings, or in some cases not paying much attention at all. Those who tuned in mostly share an interest in politics and have already-strong partisan convictions.

Sources for news vary widely. About half of those who’ve heard news about impeachment said they’d gotten at least some of that news from local TV, 41% from a cable TV network, 40% online, 39% from national broadcast TV, 34% from social media and 31% from talking with other people. About a quarter reported getting some news from radio, 17% from a print newspaper or magazine and 10% from C-SPAN.

Of those who watched cable TV, 53% say that CNN was one of their sources, 57% that Fox News was, and 40% that MSNBC was. Most Democrats and Democratic-leaners in this group say they watched CNN and MSNBC; a near-universal 91% of Republicans and Republican-leaners watching cable tuned into Fox, although a minority followed other networks as well.

By contrast, back in 1973, 70% of Americans told Gallup they’d simply watched at least some of the proceedings live on television. (Because of differences between the surveys ― including the fact that the HuffPost/YouGov poll was conducted online ― the numbers aren’t precisely comparable.)

Of those who’ve followed at least some news about the trial, about a third say they’ve learned something new about the case against Trump from the proceedings, while 58% say they have not. The group who found the trial enlightening is dominated by Trump’s opponents: two-thirds of those who say they learned something are Democrats or lean toward the Democratic Party.

Regardless of their feelings, few expect the president’s ouster. Only 13% of Americans believe it’s even somewhat likely that Trump will be removed, down from 20% in late January.

Use the widget below to further explore the results of the HuffPost/YouGov survey, using the menu at the top to select survey questions and the buttons at the bottom to filter the data by subgroups:

The HuffPost/YouGov poll consisted of 1,000 completed interviews conducted from Jan. 31 to Feb. 2 among U.S. adults, using a sample selected from YouGov’s opt-in online panel to match the demographics and other characteristics of the adult U.S. population.

HuffPost has teamed up with YouGov to conduct daily opinion polls. You can learn more about this project and take part in YouGov’s nationally representative opinion polling. More details on the polls’ methodology are available here.

More from HuffPost US:
Parkland victim’s dad gets booted from State of the Union for shouting at Trump
Trump ripped for disrespectful national anthem antics at his Super Bowl party
NPR donations surge after Mike Pompeo's ugly confrontation with reporter