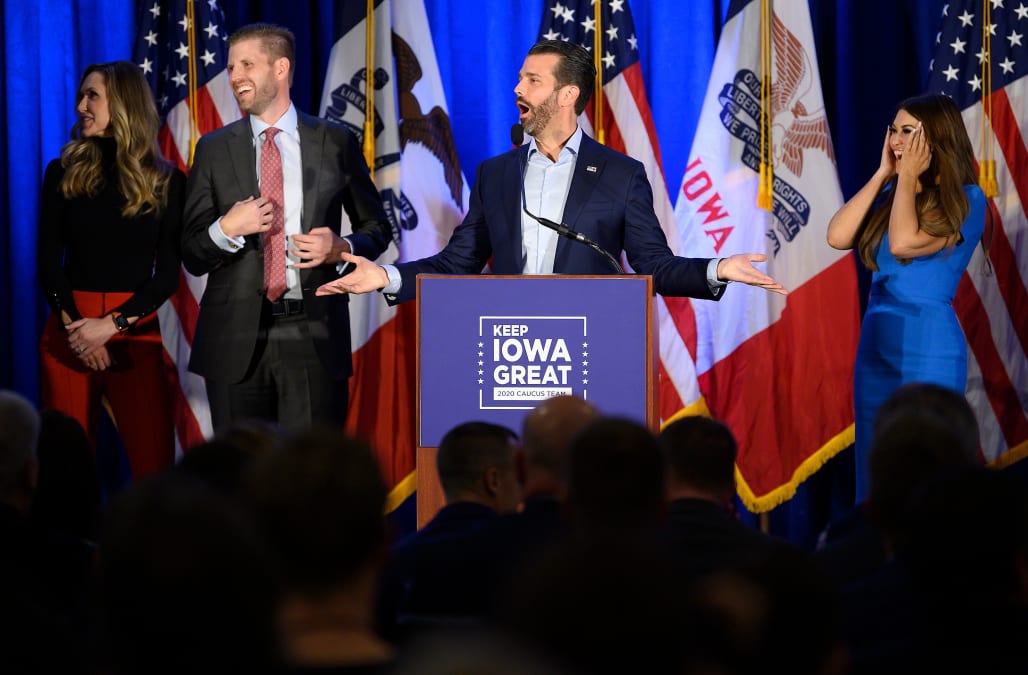 "Mark my words, they are rigging this thing ... what a mess," Eric Trump, one of Trump's sons, tweeted. "This is why people don’t want the #Dems running our county."

"The fix is in... AGAIN," tweeted Trump's eldest son, Donald Trump Jr. "And we get to watch it play out on live TV. Incredible."

There was no evidence that the state Democratic Party, which is overseeing the election, was "rigging" the results, although the confusion that followed Monday's caucusing was met with a steady flow of conspiracy theories online as to what exactly was going on.

Early Tuesday, the state party said it would release results from the Democratic caucuses later in the day after "manually verifying all precinct results."

Mandy McClure, communications director for the Iowa Democrats, said Monday night there were "inconsistencies" in reporting the three sets of results.

"In addition to the tech systems being used to tabulate results, we are also using photos of results and a paper trail to validate that all results match and ensure that we have confidence and accuracy in the numbers we report," McClure said, adding, "This is simply a reporting issue. The app did not go down, and this is not a hack or an intrusion. The underlying data and paper trail is sound and will simply take time to further report the results."

Earlier in the night, the state party said it was conducting "quality control checks, making sure the numbers are accurate."

Kayleigh McEnany, a spokesperson for the Trump campaign, questioned whether the results were "being rigged against [Sen.] Bernie Sanders?"

In recent weeks, Trump and his allies have suggested the Democratic Party is conspiring against Sanders, who was leading in the RealClearPolitics polling average of Iowa surveys heading into the caucuses. That echoes claims made about the Democratic and Republican primaries in 2016, where both Sanders and Trump said at different points that the party establishments were "rigging" the process. Last summer, Sanders told MSNBC of the 2016 race that "some people say that if maybe the system was not rigged against me, I would have won the nomination and defeated Donald Trump.

Pushing back on Trump's claims about the 2020 primary, senior Sanders campaign adviser Jeff Weaver told MSNBC ahead of the caucuses Monday the process "is not currently rigged."

Speaking at his Iowa election headquarters following Monday's vote, Sanders said he had a "a good feeling" the Iowa results, once announced, will be favorable to his candidacy.

In his own analysis of the chaos, Trump did not go quite as far as his children and campaign, simply calling it "an unmitigated disaster," adding in a tweet that "The only person that can claim a very big victory in Iowa last night is 'Trump.''

Trump also vowed that as long as he is president, the Iowa caucuses would remain the first nominating contest in the nation, despite criticisms of the process.

It is not the fault of Iowa, it is the Do Nothing Democrats fault. As long as I am President, Iowa will stay where it is. Important tradition! https://t.co/bX3FLvua1C

Trump was NBC News' projected winner in the Republican caucuses, getting about 97 percent of the vote. Such a strong result was not in doubt.

As it became clear the state Democratic Party was dealing with major issues in releasing the totals, election workers pointed to a new smartphone app created for organizers to report the results as to blame for the chaos.

"The app is the issue, and the hotline is smoked," said Joe Galasso, a volunteer in charge of new registrations for Waukee Precinct 2, in Dallas County. A source familiar with the process said the backup phone line was "a disaster."

"The app is f---ing up," said a senior aide to one of the campaigns, who asked not to be identified. "Can't trust the numbers coming in."

NBC News previously reported that security experts had expressed some concern about the app, which is also set to be used in the Nevada caucuses later this month. Trouble began brewing earlier Monday as some precinct leaders and county chairs said they were unable or unwilling to use the app.

"The app that was intended to relay caucus results to the party failed; the party's backup telephonic reporting system likewise has failed,” Ramus wrote.

While it is still unclear if the reporting app’s problems came from a technical issue or user error, the Iowa Democratic Party claimed that the app “did not go down.” Several precincts reported long hold times to reach the party’s telephone reporting system, the back-up to the app.

More from NBC News:
Pete Buttigieg: Americans 'are the jury' in Trump's impeachment trial
Sanders, Biden are neck-and-neck in new NBC/WSJ national poll
Joe Biden breaks down in tears: 'Beau should be the one running'