Susan Collins to vote to acquit Trump of all impeachment charges 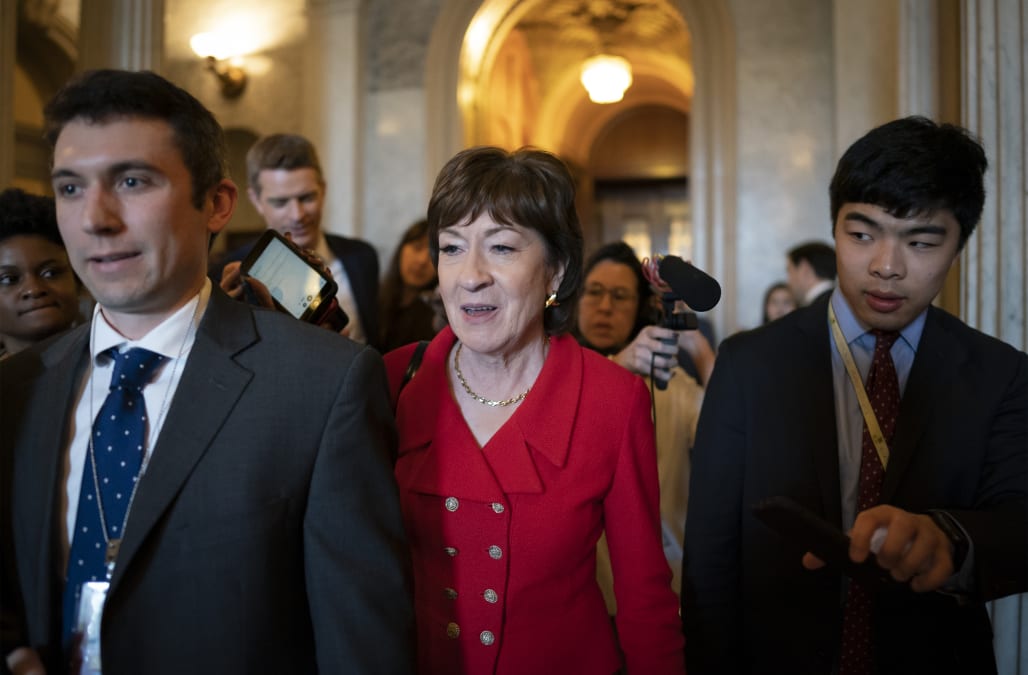 WASHINGTON ― Sen. Susan Collins (R-Maine) announced Tuesday that she does not support removing President Donald Trump from office, sticking with her party on another controversial vote ahead of a tough re-election fight in November.

“I do not believe the House has met its burden of showing that the president’s conduct, however flawed, warrants the extreme step of immediate removal from office,” she said.

The Senate is set to vote Wednesday on whether to remove Trump from office for pressuring the government of Ukraine to open an investigation that could benefit him politically, using congressionally approved foreign aid and a potential White House meeting. Along with abuse of power, Trump was also impeached by the House for obstruction of justice after he allegedly tried to block the chamber’s probe into the matter.

Collins was one of only two Republican senators who supported an effort to call witnesses in Trump’s impeachment trial. In a vote last week, nearly every GOP senator opposed allowing witness testimony, making it the first U.S. presidential impeachment trial to feature no live witnesses.

Collins is facing a tough re-election fight for what would be her fifth term in office. Winning her seat is key for Democrats aiming to flip the Senate in November. Maine state House Speaker Sara Gideon (D), one of her top would-be challengers, has built a formidable war chest ahead of the state’s June primary. Last month, a Morning Consult tracking poll showed Collins’ approval with voters in Maine take a substantial hit. The Maine Republican surpassed Senate Majority Leader Mitch McConnell (R-Ky.) as the most unpopular senator in the country, according to the poll.

The Senate is expected to acquit Trump on both charges, with a strong majority of Republicans voting against conviction. Sen. Mitt Romney (R-Utah), the other GOP senator who supported calling witnesses, has not yet announced how he intends to vote on the removal of the president from office.

On the Democratic side, red-state Sens. Joe Manchin of West Virginia, Doug Jones of Alabama, and Kyrsten Sinema of Arizona remain undecided on Wednesday’s vote on the impeachment articles.