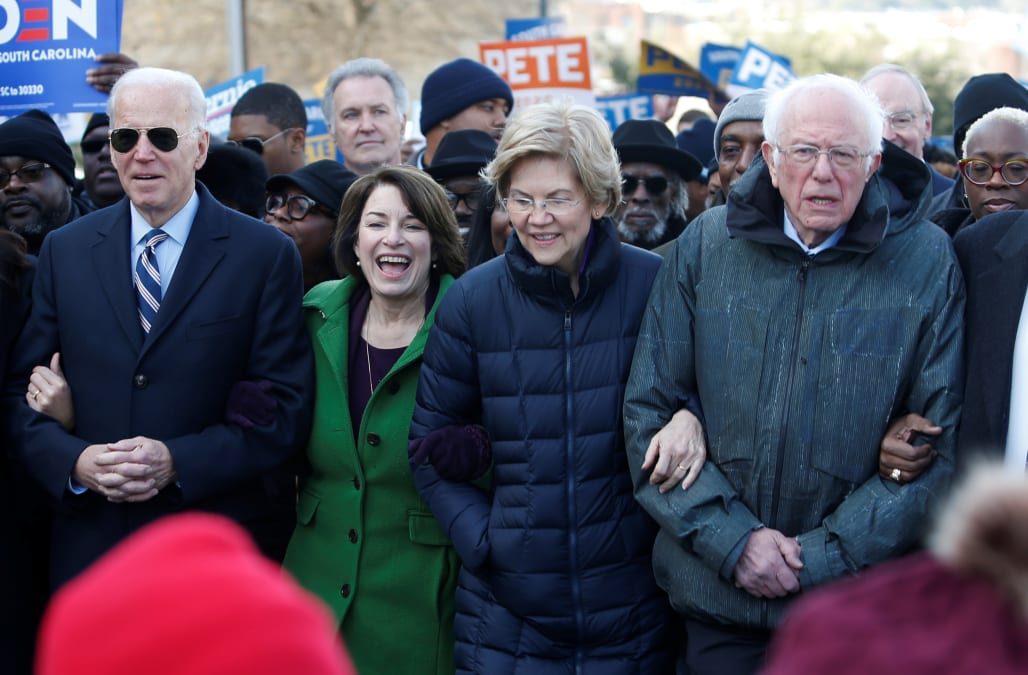 The Democratic presidential hopefuls descended on the small New England state on Tuesday, fresh off overnight flights, full of caffeine and without official results from Iowa. That didn't stop many of them from offering some form of a victorious message — and raising the stakes on the importance of New Hampshire.

“Everything we know is extremely encouraging,” Pete Buttigieg said Tuesday after being endorsed by Jim Donchess, the mayor of Nashua. Bernie Sanders, whose campaign released its own caucus results with a claim of winning, wasn't expected to greet voters in the state until the evening. Andrew Yang held a middle-of-the-night rally at the airport upon landing in the state, while Elizabeth Warren, Amy Klobuchar and Joe Biden planned mid-day events.

New Hampshire had largely taken a backseat to Iowa through January, but the state is poised to take on a more important role following Iowa's delayed, chaotic results.

“New Hampshire becomes, I think, more important because we don't know what Iowa's going to come out with,” said Bill Shaheen, a Democratic National Committeeman from the state who is backing Biden.

The state's Feb. 11 contest is a primary, which is far simpler than a caucus; the election is also run by state and local governments, not the political parties, like Iowa. A primary works like a general election, with people going into the voting booth and selecting one candidate. New Hampshire uses paper ballots, with some places counting them electronically.

“Even if those systems failed, New Hampshire would still have an election and would report results at the end of the night," Deputy Secretary of State Dave Scanlan said Tuesday morning.

The state's political class has long liked the characterize New Hampshire as more influential than Iowa, even as Iowa has had a better track record of picking the eventual nominee in recent Democratic contests. Not since 2004 have its independent-minded voters followed Iowa's lead in an open Democratic presidential primary.

While voters have been courted by candidates for the past year, at house parties, town halls and rallies, about half said they still hadn't decided who to support, according to a January CNN poll, making the final week before the primary a critical opportunity for candidates to close the deal.

“You all are extremely famous in this state for folks waiting until the last five days to finally make up their minds," former Vice President Joe Biden told supporters in January at a campaign office in Manchester, the state's largest city, at 110,000 people.

None of the top-tier candidates had characterized winning the state as a must, though the results of Iowa may change that. While there is a perception that because Sanders hails from neighboring Vermont, and Warren from Massachusetts, they need to do well in New Hampshire, key surrogates have softened the idea that victory is necessary.

“New Hampshire's never been a state that determines who the nominee's going to be. The question is doing well in New Hampshire," Kathy Sullivan, a Democratic National Committee member from New Hampshire who has endorsed Warren, said last week.

Indeed, New Hampshire is known more for humbling the front-runner than for picking the winner, at least in recent Democratic elections. In 2008, the state backed Hillary Clinton over Barack Obama, setting up a lengthy nomination battle. Eight years later, New Hampshire voters bucked Clinton for Sanders.

“We want to make up our own minds, we’re somewhat contrary,” said John Lynch, a former Democratic governor with a centrist bent who is a Biden supporter.

Still, polling shows Sanders in the lead, with competitors like Biden and Warren trailing behind.

“It is Bernie’s to lose,” said Lou D’Allesandro, a longtime state senator who is backing Biden.

That's despite Sanders having a late start in the state. Warren showered the state with more attention through the summer, though Sanders has dialed up his efforts since. The Sanders campaign says it has over 150 staffers in New Hampshire, which gives the senator the largest publicly announced staff in the state. Former South Bend, Indiana, Mayor Pete Buttigieg has about 80 staffers, while the Biden campaign has more than 50, and the Warren campaign has more than 55, according to aides.

“We are confident, but we're not taking anything for granted and we're not slowing down,” Shannon Jackson, a longtime aide to Sanders who now works as his New Hampshire state director, said last week.

Most of the major candidates, except for Biden, ran television ads in January. New Hampshire has just one statewide television network, and many people in the southern part of the state rely on Boston stations for news. That, combined with Massachusetts voters moving into the state to take advantage of the low taxes and cheaper housing, means Warren is known to many voters in New Hampshire.

Rep. Annie Kuster, who is backing Buttigieg, cited voters independent nature — more people are registered without a party than Republicans or Democrats — and history of divided government at the state level as reasons why Buttigieg's message and personal background can resonate.

“It's a very fluid electorate,” she said. “They are very tuned in to the person.”

New Hampshire is richer, whiter and older than the rest of the country. But while unemployment is less than 3%, wages have stagnated over the past decade, rising far slower than nationally, according to a report from the University of New Hampshire's Carsey School of Public Policy. The state is dealing with an aging population, particularly in the rural North Country, that will call for a ramp up in health care and personal care jobs in the coming years. Meanwhile, New Hampshire residents have some of the highest student debt in the country. All that combines to show why a candidate like Sanders could appeal to voters in the state in 2016.

But this time around, both Hawaii congresswoman Tulsi Gabbard and Yang are appealing to those same voters, and they spent far more time in New Hampshire than Sanders in January.

Colorado Sen. Michael Bennet, meanwhile, skipped Iowa entirely to focus on New Hampshire. He was holding his 47th town hall meeting on Monday night as Iowans went to the polls, and he said he's hoping for a third place finish. That's still a long shot, based on polls. Former Massachusetts Gov. Deval Patrick has similarly emphasized New Hampshire, but doesn't seem to be benefiting from leading a neighboring state.

Klobuchar won the endorsements of three New Hampshire newspapers, offering her a second look and added credibility in the race's closing days.

Voters have frequently pressed on the candidates over the feasibility of Medicare for All and how the contenders intend to get their ambitious plans passed if their tenure begins with a Republican-controlled Senate. But they are quick to say that their main priority is defeating Trump.

"I have somebody I'd like to vote for, but I don't think they can beat Trump," 78-year-old Rita Kirk said after attending a Bennet event in January.

Joleen Little, an administrative assistant at Franklin Pierce University, said she's an independent who is deciding between Biden, Buttigieg and Yang. As someone in “retirement age," she cares about health care, as well as America's place in the world. But her interest in Buttigieg and Yang reflected New Hampshire voters' desire to see candidates up close and learn what makes them tick.

“The ambition they have,” she cited as reason for her interest. “And the comfort that's in their voices.”

Catch up on the 2020 election campaign with AP experts on our weekly politics podcast, “ Ground Game.”