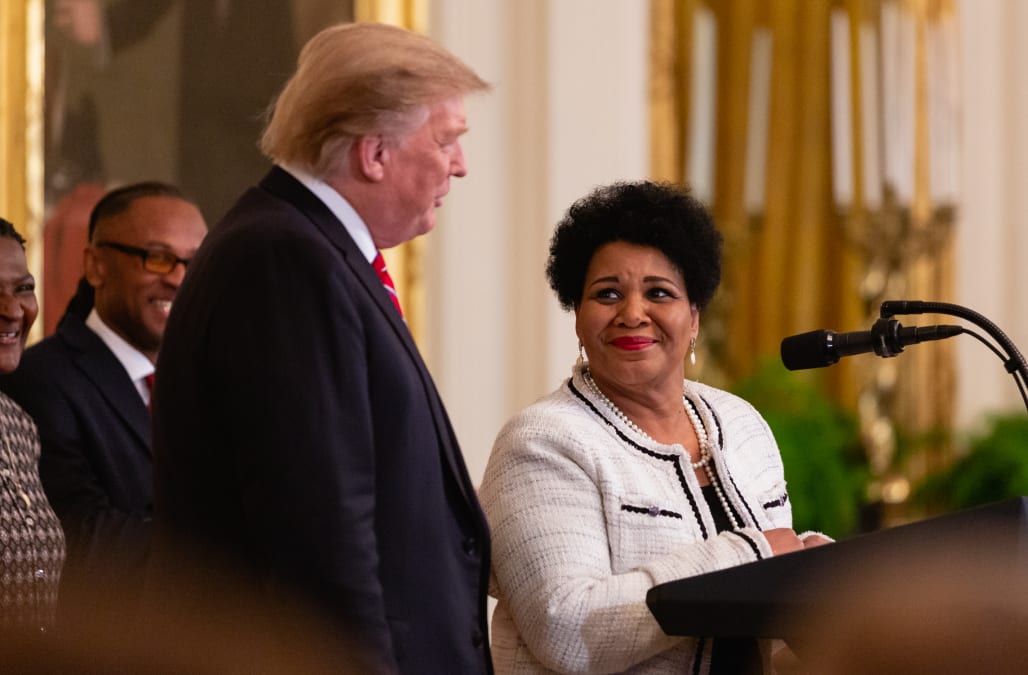 President Trump's Super Bowl campaign ad that featured Alice Marie Johnson, the woman who was freed from prison after serving 21 years for a nonviolent drug offense, is drawing criticism.

After Kim Kardashian West learned about Johnson's story, she met with Trump in 2018 to discuss helping the 64-year-old and criminal justice reform as a whole. A week later, the president commuted her sentence.

"While this administration will always be very tough on crime, it believes that those who have paid their debt to society and worked hard to better themselves while in prison deserve a second chance," the White House said in a statement at the time.

The commercial featured Johnson and included a clip of her after she was released from prison, crediting the president for her release.

"Alice Johnson was sentenced to serve life in prison for a nonviolent drug offense," the commercial said. "Thanks to President Trump people like Alice are getting a second chance. Politicians talk about criminal justice reform. President Trump got it done. Thousands of families are being reunited."

Johnson tweeted the ad Sunday, saying: "Two Super Bowls ago I was sitting in a prison cell. Today I am a free woman and my story was featured in a Super Bowl Ad. I will spend the rest of my life fighting for the wrongly and unjustly convicted! God Bless America!"

Two Super Bowls ago I was sitting in a prison cell.

Today I am a free woman and my story was featured in a Super Bowl Ad.

I will spend the rest of my life fighting for the wrongly and unjustly convicted!

Kardashian West responded to Johnson’s tweet: "So proud of you!!!!"

After the ad aired, Twitter users quickly responded and accused Trump of taking credit for Kardashian West's efforts and criticized him for using Johnson’s case to boost himself.

Now we know why Donald Trump got Alice Johnson out of prison: so he could run a Super Bowl commercial about it and pander to Black people leading up to his re-election.

Anyone just realize how Kim K wasn’t recognized in the super bowl commercial about getting Alice Marie Johnson out of prison? Trump took all the credit🧐 #KimKardashian#trumppic.twitter.com/3FXUnBvTmP

Alice Johnson is one person who won early release because celebrities brought her to Trump's attention. She deserved it. But there are thousands more like her in prison. We need a real pardon process that works fairly. We need real criminal justice reform. Don't be fooled. https://t.co/rx9TVXRqeI

That Trump commercial has me shook. If it weren’t for @KimKardashian Alice Marie Johnson would still be behind bars. Please let it be clear that Trump is deliberately separating families, not reuniting them.

In 2018, the reality star responded in a CNN interview to those who argued that Trump used her as a political pawn in securing the commutation of Johnson.

"I was working on this before. I don’t think I would be used," West said. "At the end of the day, he heard me out. We got the job done. What could he really use me for?"