In Iowa, Biden had a bumpy ride to the finish line 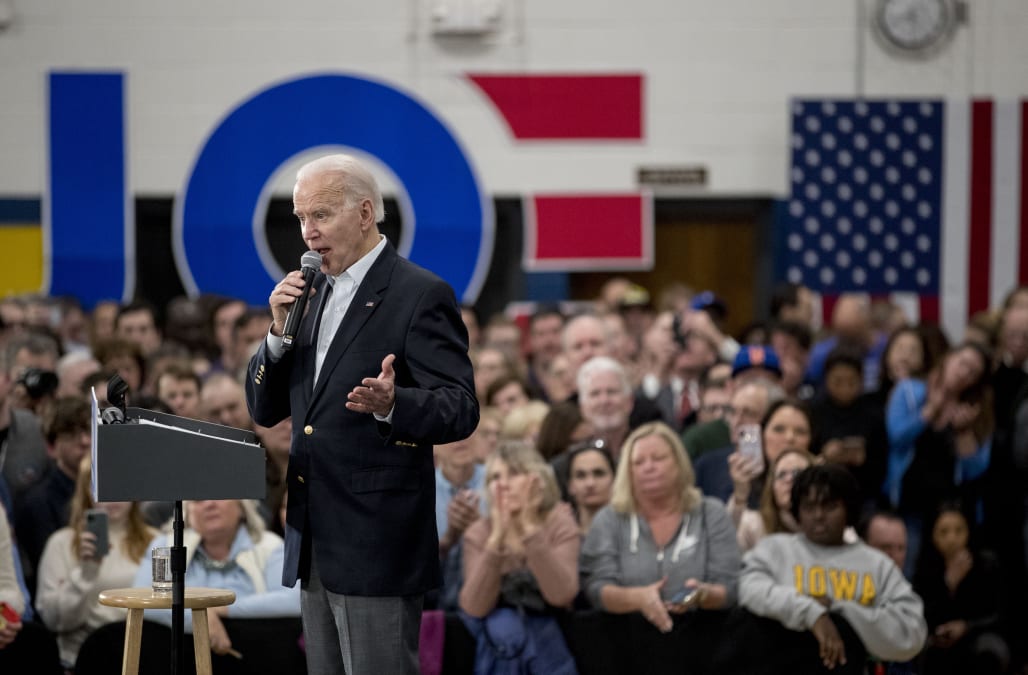 DES MOINES, Iowa — Joe Biden, the long-standing polling leader among Democrats nationally, had a bumpy ride as he made his final pitch to voters in the two weeks leading up to Monday’s Iowa caucuses. Despite the absence in the state of most of his leading challengers — senators who were stuck in Washington for the impeachment trial — the former vice president found himself in a tight race in the state amid attacks from both Republicans and the progressive wing of his own party, and facing questions about a leading supporter who accidentally made headlines.

All of the drama swirling around Biden was on display as he held his final public event before the caucuses in a packed gymnasium on Sunday evening. In his closing speech, he described the coming presidential election as a final chance to “save the soul of the nation” from an unprecedented threat posed by President Trump.

Biden’s pitch leans heavily on the idea that Trump is a uniquely dangerous leader, along with his argument that he is uniquely positioned to bring together Democrats and the rest of the country to defeat the president.

“We need a president who can ... unite our party when this nomination is all over, unite the country,” Biden said at his rally.

But so far, while polls show Biden would perform better than his primary rivals in a general election matchup against Trump, he has struggled to add to his base of roughly a quarter of Democratic Party voters. In recent weeks, Vermont Sen. Bernie Sanders, a self-described democratic socialist calling for universal health care and free public education, has surged ahead of Biden in Iowa. Biden and Sanders have taken shots at each other over their vision for Social Security spending. Many more centrist Democrats have expressed dismay at the prospect of a Sanders victory and suggested the progressive senator and his allies are fracturing the party with their attacks on Biden and other moderates. As Biden mingled with voters after his speech, Yahoo News asked him if he thought Sanders was hurting the Democratic Party.

The progressive dissatisfaction with Biden was on full display at his rally on Sunday. At one point a woman interrupted the speech to shout, “Stop taking fossil fuel money!” That critique has sparked prior protests against Biden, who has pledged not to take contributions of more than $200 from “SEC-named executives of fossil fuel companies.’’

“Don’t worry about that,” Biden told the protester. “We’re not going to take any money from fossil fuels.”

“You already have,” she replied. At a climate change forum in September, Biden was asked about a fundraiser hosted by an investor in a company that builds terminals for export of liquefied natural gas. It’s unclear whether that constituted a technical violation of his campaign pledge.

Biden’s crowd hushed the woman and broke into chants of “We love Joe!” But it wouldn’t be the last interruption of the evening. A few minutes later, someone shouted, “Close down Guantánamo Bay!” The audience urged Biden to ignore the outburst.

“I will keep going," Biden said.

But Sanders and the more left-leaning Democrats aren’t the only opponents Biden has to worry about heading into the caucuses. On Monday morning, a final Iowa poll was released showing another moderate, former South Bend, Ind., Mayor Pete Buttigieg, in first place. Both Buttigieg and Sanders had gained points in the survey, which showed Biden in third place.

And with Trump’s impeachment unfolding in Washington, Biden has also taken shots from Republicans. Trump is accused of pressuring the government of Ukraine to investigate Biden in connection with his son Hunter’s dealings in that country. Republican Iowa Sen. Joni Ernst alluded to the questions surrounding Biden’s son in an interview with Bloomberg News on Sunday where she suggested that if Biden wins in November he could face an impeachment of his own “the day after he would be elected.” Biden responded in an interview with the Des Moines Register where he described Ernst’s comments as proof that Republicans “very much don’t want to face me obviously.” Trump’s push to have the Bidens investigated centers on a questionable theory that the vice president pushed for firing a Ukrainian prosecutor to protect Hunter’s business interests.

And with Biden taking heat from both sides of the aisle, one of his top endorsers inadvertently caused an embarrassing distraction over the weekend whenNBC reported that former Secretary of State John Kerry, in Iowa campaigning with Biden, was overheard on the phone in a Des Moines hotel discussing his concerns about a potential Sanders victory and musing about whether he should enter the presidential race himself. Kerry subsequently tweeted that he is “absolutely not running for President” and has “been proud to campaign with my good friend Joe Biden.”

Kerry was at a middle school gym with Biden on Sunday, but he did not speak. Biden pointed out Kerry in the crowd and praised him as “a guy who’s been a friend of mine a long, long time.” Afterward, as Biden mingled with the crowd, he ignored several questions about whether he was frustrated by the phone call or worried Kerry might run. A Biden staffer chastised a Yahoo News reporter who asked about the Kerry report.

“That’s your question?” the staffer asked in apparent frustration.

Despite the attacks on him and unexpected drama in his own camp, Biden is projecting confidence. As he took selfies and exchanged greetings with the excited crowd, Yahoo News asked him if he expected to win Iowa.