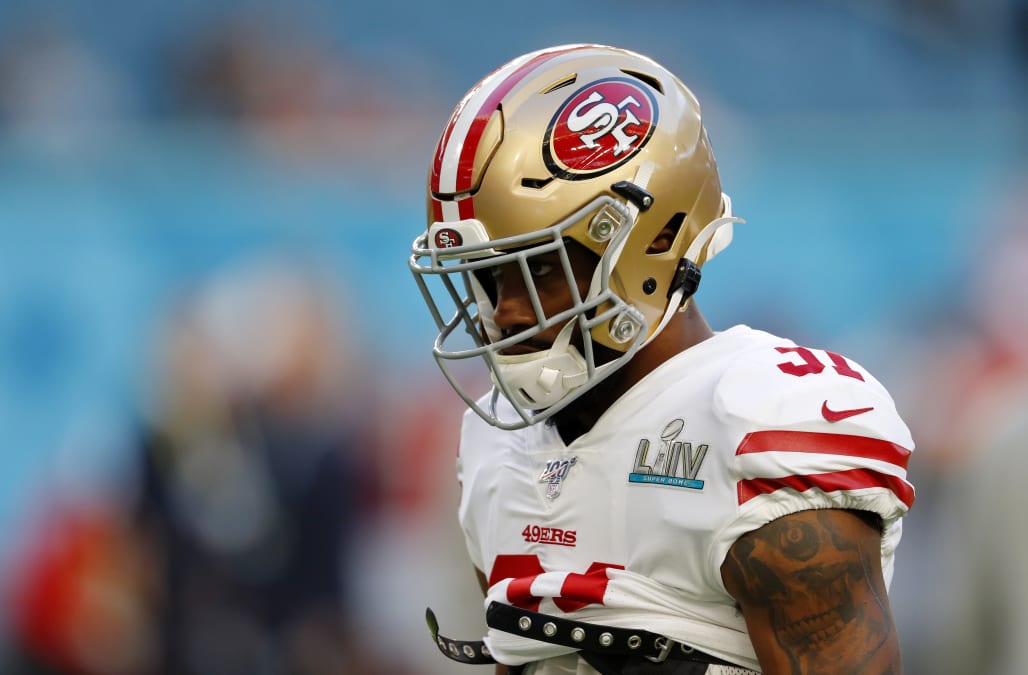 After the confetti fell to the Hard Rock Stadium field, there were two sets of emotions for the two Super Bowl LIV combatants.

For the Kansas City Chiefs, it was unbridled joy at winning the franchise’s first Lombardi Trophy in 50 years.

For the San Francisco 49ers, it was utter shock at losing a game in which they led by double digits with just over six minutes remaining.

But for two undrafted running backs — one from each team, both helping their teams reach this stage — the moment was a bit different.

Check out the exchange between the Chiefs’ Damien Williams and the 49ers’ Raheem Mostert, two men who have a lot in common — aside from the result of the game:

Chiefs RB Damien Williams immediately chased down 49ers RB Raheem Mostert after Super Bowl 54, shared some emotional words and swapped jerseys. Then he went out and finally celebrated with his team. So much class. pic.twitter.com/GsiNqYm10I

We don’t know what exactly was said. The audio isn’t clear. But it’s easy to figure out the level of respect between Williams and Mostert, once teammates for a brief time, was extremely high.

Their stories are nearly the same

The two weeks leading up to LIV was a celebration of the talent, determination and impact of these two players. Neither player was drafted into the NFL. Both clearly belong.

And each stood out on the big stage on Sunday. Williams totaled 133 yards on 21 touches and scored two TDs, the latter providing the game-winning margin for Kansas City. Mostert put the 49ers up 20-10 in the third quarter with a gutty touchdown right up through the heart of the Chiefs’ defense. He totaled 60 yards on his 13 touches and likely warranted a heavier workload when the 49ers went pass-heavy with the lead.

Williams took the long road to success, having to scrap his way onto the Miami Dolphins as an undrafted rookie, and then scrap for whatever crumbs for carries he could get. He had moments in Miami, but the Dolphins let him walk.

That was the Chiefs’ gain. Despite missing time with injury this season, he’s now come up impossibly huge in two straight playoffs. Even so, he unjustly feels like the kind of player who will still have to ward off talk that he’s anything more than a solid player.

Mostert has him beat. He was cut seven times, spending time on three rosters in less than a month in 2016 and five teams’ rosters that entire season. Five teams in one year! But the last one was his keeper: The 49ers have ridden Mostert in a way few could have expected, namely in his four-TD NFC championship effort.

The two actually shared a locker room for a short time, too. In Miami, site of the Super Bowl, naturally. The two were on the Dolphins for a few months in 2015. Mostert was eventually the odd man out when he was cut in October of that year. He played a mere one game in Miami, logging 12 special-teams snaps.

And once more, Williams was just a little bit better on this day.

When you see Williams chase down Mostert, embrace him after the 49ers’ loss, look him in the eye and then swap jerseys with him, you know it’s not about yards or points in that moment. If there’s anyone who gets what each other has been through, it’s them.

Seriously, this is his Super Bowl jersey. This isn’t preseason. This is likely the biggest moment of Williams’ sporting life, and this was the sweat-drenched jersey that he played exceptionally well in and won it all. The type of thing that is typically framed, insured and hung in glorious ex-jock man caves the world around.

And he’s giving it to his doppelgänger. What a cool bond that formed during their best weeks and, in the case of Mostert, also his worst. Seeing Williams had to be the best possible end to a bad result.