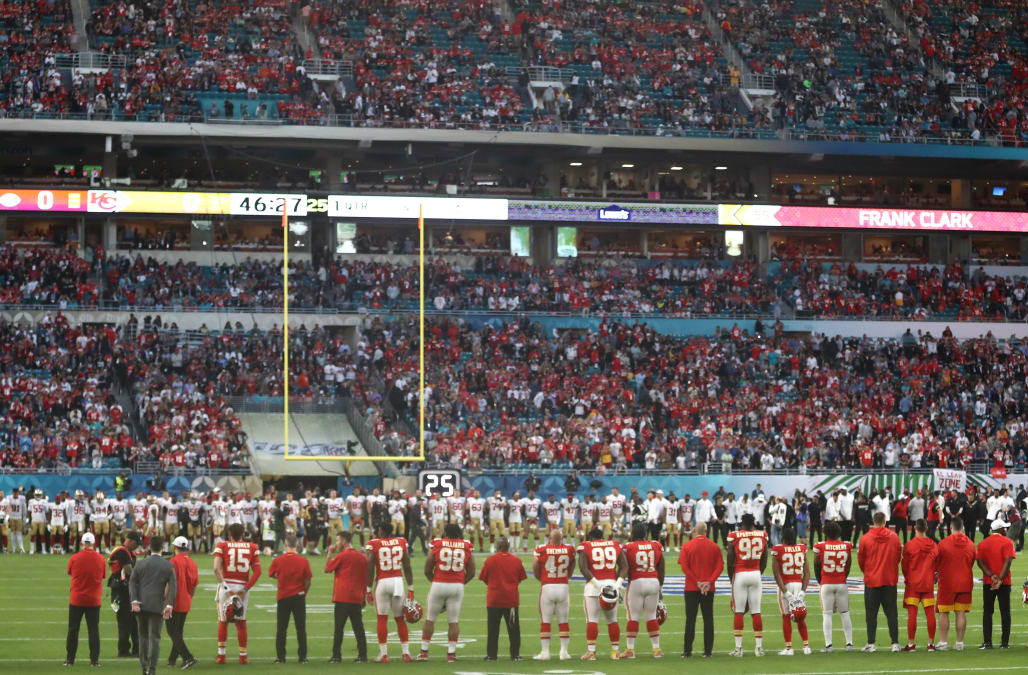 About a half hour before kickoff, after pregame warmups, players and coaches from the Kansas City Chiefs and San Francisco 49ers lined up at the 24-yard line. Bryant, the Los Angeles Lakers superstar who died in a helicopter crash last Sunday, wore No. 24 for the last part of his NBA career.

Players and coaches from both teams lining up at the 24-yard line. What a tribute. pic.twitter.com/Af5EG0tTm9

Players spent a few minutes on the 24-yard line before finally retreating to the locker room. It was an uncommon tribute, especially for a player from another sport.

The Bryant tragedy overshadowed Super Bowl week. He had an impact on players from both teams, who grew up watching him play for the Lakers.

“I wasn’t lucky enough to get to meet Kobe, but the impact that he made in my life was huge,” Chiefs quarterback Patrick Mahomes said Monday at Super Bowl Opening Night. “The way he was able to compete every single day. That is something I try to do.”

There were reminders all week. At a concert Friday at American Airlines Arena, Guns N’ Roses dedicated “Knockin’ On Heaven’s Door” to Bryant. Saturday at the NFL Honors show, Peyton Manning spoke about the grief he was feeling about Bryant, who he worked with on ESPN’s “Detail” show.

“I was lucky to call Kobe my friend,” Manning said. “Kobe loved not just basketball but all sports. He was a superstar and a fan. Huge admirer of his hometown Philadelphia Eagles. Kobe gave a pep talk to the team before a playoff game the year they won the Super Bowl.

“He talked to a lot of teams and players over the years at every level of sports, from youth teams —like his daughter Gigi’s — to the pros.”

Even in the stands on Sunday there were reminders of Bryant. Plenty of fans wore a purple or yellow Bryant jersey to a football game — at least one fan wore Bryant’s high school jersey from Lower Merion.