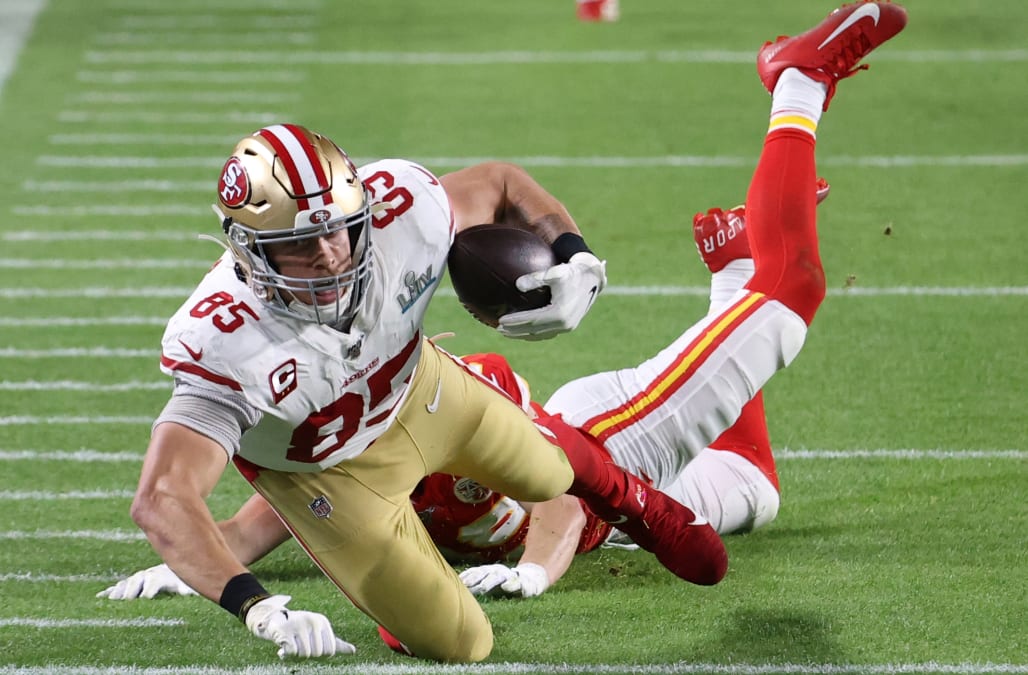 MIAMI GARDENS, Fla. — The San Francisco 49ers looked like they had a big play to set up at least a field goal with six seconds left in the first half of Super Bowl LIV.

The 49ers looked content to run out the final minute of the first half, but a 20-yard pass on third down got them to their own 40-yard line. Then Jimmy Garoppolo completed a deep pass to George Kittle to the Chiefs’ 13-yard line that could have at least set up a field goal.

Hold on. Flag on the play. Kittle was called for pushing off Chiefs safety Daniel Sorensen. The catch came back on what looked like a questionable offensive pass interference call.

[Watch the Super Bowl for free on the Yahoo Sports app]

Flag was warranted but Kittle didn't even need to push off, the defender was way overmatched pic.twitter.com/TXMuo50kBh

The 49ers fell behind, in part due to an ill-advised interception by Garoppolo.

Garoppolo was under pressure and threw wildly despite the rush closing in on him. Defensive tackle Mike Pennel crushed Garoppolo as he threw, and his pass floated out and was easily picked off by Chiefs cornerback Bashaud Breeland. That set up a Chiefs field goal and a 10-3 lead.

Garoppolo was key to the 49ers’ first touchdown drive right after the Chiefs scored that field goal. He hit all three of his passes for 42 yards, the final one to fullback Kyle Juszczyk for a 15-yard touchdown. The Super Bowl was tied. It was the first touchdown catch in a Super Bowl for a fullback since William Floyd for the 49ers at the end of the 1994 season.

First half was mostly even

The momentum swung back and forth in the first half. The 49ers started with a creative drive, highlighted by a long run from receiver Deebo Samuel. Samuel’s 32-yard run was the longest for a receiver in Super Bowl history. The 49ers had to settle for a field goal on that drive.

Kansas City came back to take the lead late in the first quarter. Patrick Mahomes scored on a 1-yard run to give the Chiefs a 7-3 lead.

The 49ers had an up-and-down second quarter, mostly thanks to the best and worst of Garoppolo. He was 9-of-11 for 89 yards in the first half. Given how little Garoppolo threw the ball in the 49ers’ first two playoff games, that must have seemed like a heavy workload.

It would have been a bigger half had Kittle’s catch counted. The 49ers believed it should have.

When the refs STEAL your rightful squares win pic.twitter.com/gfY51ySu7X