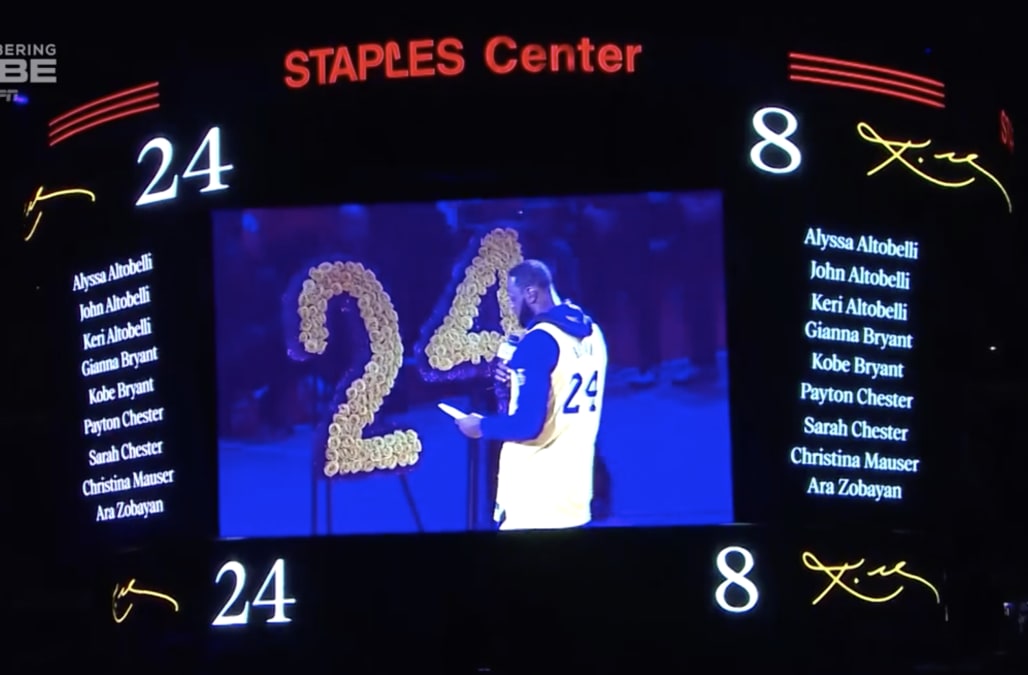 LOS ANGELES — Only Kobe Bryant could inspire notoriously late-arriving Los Angeles crowds to show up early to a game.

Grieving fans packed almost every Staples Center seat 30 minutes before tipoff Friday night to ensure they didn’t miss a second of the Lakers’ heartfelt pregame tribute to their fallen icon.

The homage to Bryant began with the arena lights dimming as familiar chants of “Kobe” and “M-V-P” rained down from the rafters. A spotlight then revealed Usher at mid-court and the R&B star sang an emotional rendition of “Amazing Grace.”

A video montage of Kobe’s life then aired on the scoreboard with the former Lakers star himself providing narration via interviews culled from throughout his life. At the end of the video, Lakers public address announcer Lawrence Tanter referenced each of the nine victims of Sunday’s helicopter crash and then called for 24.2 seconds of silence, 24 for Kobe, of course, and 2 for his daughter, Gianna, whose basketball teammates were sitting courtside Friday night.

The tribute concluded with LeBron James grabbing the microphone, scrapping the speech he had prepared and speaking from the heart. In an eloquent four-minute speech that struck all the right notes, LeBron called on Lakers fans to stop grieving for the next few hours and to celebrate Kobe’s remarkable life.

The Lakers added to the reverential ambience by laying yellow Kobe shirts across every chair, half bearing No. 8 and half No. 24. Players warmed up in those shirts before tipoff as images of Kobe, Gianna and the seven other victims flashed across the scoreboard overhead.

On the right shoulder of their jerseys, the Lakers wore black KB patches, an insignia also emblazoned on the baseline at both ends of the floor. Two floor seats across from the Lakers’ bench remained empty in honor of Kobe and Gianna, one with his No. 24 jersey draped over the back and the other with her No. 2.

All five Lakers starters wore No. 8 or No. 24 jerseys during the pregame ceremony, and Tanter actually introduced all five as though they were Kobe himself. The Lakers and Blazers then began the game by symbolically taking a 24-second violation and an eight-second violation, respectively, in honor of Kobe.

The Lakers hoped Friday’s game would be a welcome distraction from their anguish, a return to some semblance of normalcy at the end of a week that has been heartbreaking and surreal. It was only five days ago that players and coaches learned of Kobe’s death via media reports on their flight back from Philadelphia.

While the grief over Kobe’s death this week could be felt in every Los Angeles coffee shop, schoolyard or dive bar, nowhere has it been more palpable than in and around Staples Center. Swarms of teary-eyed fans of all ages, races and nationalities have honored Kobe by gathering around the clock at the makeshift shrines set up across the street from the arena.

Some paid their respects by leaving behind Kobe pictures and jerseys, purple and gold flowers, or No. 8 or No. 24 balloons. Others drew pictures or scribbled touching messages to Kobe on the cement next to the shrines or on one of five double-sided white walls erected for that purpose.

The throngs of well-wishers across the street from Staples Center were especially large a few hours before tipoff Friday night. Many people had driven more than 50 miles to pay their respects to Kobe even though they didn’t have tickets to the game.

Kneeling in front of one of the shrines with his head bowed was Jason Martinez of Redlands, a well-worn purple Lakers cap in his hand.

Not far away was David Davila of Fontana, posing for a picture in his black “Mamba Forever” jersey.

“It’s sad that it takes a tragedy like this to bring everyone together,” Davila said.

Across the plaza from Davila, Adam Torres and his young nephew wrote notes to Kobe in black Sharpie on one of the memorial walls.

“Look at all this, man,” Torres said, gesturing at the scene around him. “He meant so much to Los Angeles.”

The scene at Staples Center is a reminder of the gaping hole Kobe’s death has left in the heart of Los Angeles. Lakers fans met him at 17 and watched him evolve from a teenage phenom to a five-time champion, from a Los Angeles favorite to an international icon.

While the Lakers’ pregame tribute to Kobe was perfectly done, the best way the team can honor him is to play with the determination and relentlessness that were his trademarks during his career. LeBron seemed to acknowledge that with how he concluded his mid-court speech.

“I want to continue his legacy, not only this year, but as long as we can play the game of basketball,” LeBron said. “So in the words of Kobe Bryant, ‘Mamba Out.’ But in the words of all of us, ‘Not forgotten.’ Live on, brother.”