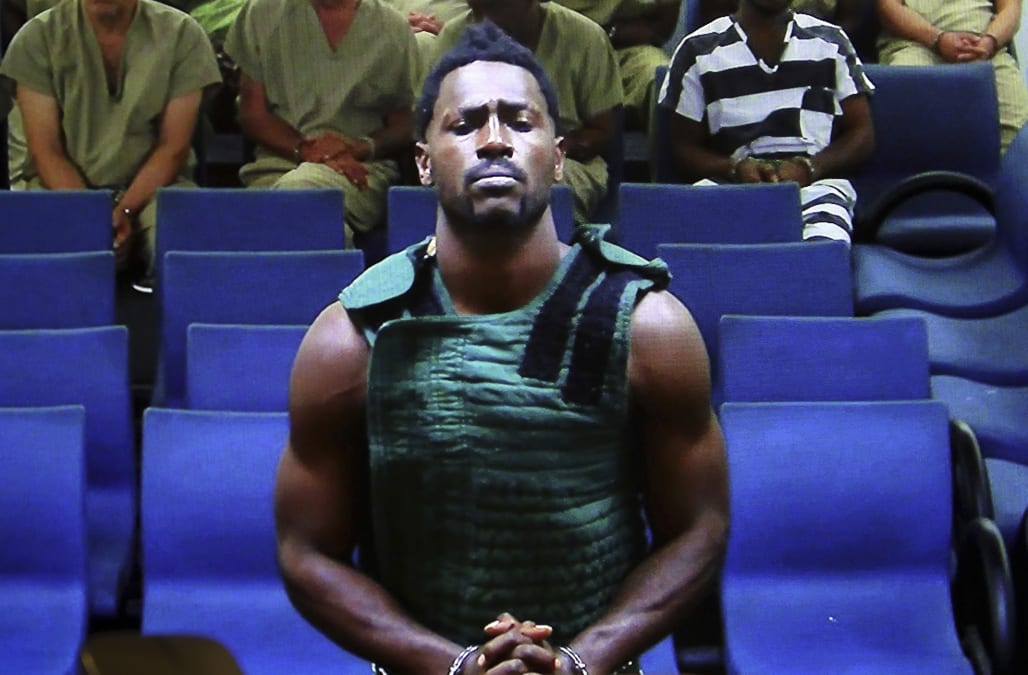 Antonio Brown apologized to the entire NFL during an interview with ESPN’s Josina Anderson on Friday.

Anderson asked Brown if he feels like he owes anyone in the league an apology.

“I think I owe the whole NFL an apology and my past behavior,” Brown said. “I think I could have done a lot of things better.”

Brown’s expansive interview covered whether or not he needs mental health help, the sexual assault allegations against him, his non-concern over developing chronic traumatic encephalopathy (CTE), and what he thinks of NFL commissioner Roger Goodell’s comments earlier this week.

Brown, 31, was asked if he feels he needs to address his mental health.

“I’m like an animal in a cage. Everyone just talks about me. I can’t go out my house in the private. Everything I do is in the face of people, face of someone talking, someone making an assumption about me.”

Following Brown’s latest arrest in January, during which police say he attacked a moving truck driver, a judge required he undergo a mental health evaluation as terms of his bail agreement. Brown is charged with felony burglary with battery, burglary of an unoccupied conveyance and criminal mischief.

The star receiver’s mental health has remained a question since before the NFL season began. The mother of his children publicly posted she would distance them from him until he seeks “the mental health that he desperately needs”, while his agent Drew Rosenhaus “conditionally” cut ties with Brown until he seeks help.

Brown doesn’t think he has CTE

In addition to his mental health concerns, there have been questions about Brown and CTE, the brain disease caused by repeated head injuries that can’t be confirmed until after death.

Brown was nearly knocked unconscious by then-Cincinnati Bengals linebacker Vontaze Burfict in a scary 2016 playoff game while he was with the Pittsburgh Steelers. That hit has been brought up more often now after Brown’s past 13 months of behavior.

Anderson asked Brown if he thought he had CTE, or if he was concerned about it.

Anderson reminded him there are stages of the disease, and he could be in an early one.

“I’m perfectly fine. I didn’t take that many big hits. I had like one big hit in 10 years. Anybody who plays this game, they’re going to get hit hard.

“He didn't hit me that hard. You know, I got up and walked off the field. We won the game. I was all right. You play the game long enough, everyone get hit hard.”

Brown said he is a target, hence why there are cases filed in court against him, and that the “media will run” with any of those allegations. He called it “unfair.”

“I feel like I never really got in a conflict with no woman,” Brown said, via ESPN. “I just feel like I'm a target so, anybody can come against me and say anything [that] I have to face. There's no support, there's no egos, there's no rules in it, anyone can come after me for anything. No proof or whatever. ‘He said, she's saying.’

“The media will run with it, so even if I'm not guilty, I already guilty because they already wrote it, put it on TV and put that in people minds. So for me to have to sit here and hear those the allegations of me is just unfair to me every time.”

Brown’s legal troubles are lengthy. There are multiple allegations of rape and sexual misconduct. A lawsuit filed in September shortly after he signed with the New England Patriots includes profane text messages to the woman that brag about the incident.

He live-streamed a profane outburst directed at Hollywood (Fla.) police, and that included him berating his children’s mother. It was filmed with his children present. That resulted in the department cutting ties with him. Brown apologized via Instagram earlier Friday.

Brown denied the accusations of sexual misconduct to Anderson, as he has previously done through lawyers. He said he “can’t speak on it” and the courts will handle it.

Goodell addressed the league’s former superstar in his “State of the NFL” address from Miami this week. He said the NFL is interested in Brown’s “well-being” above anything else at the moment and have resources available to him.

“I was pleased to hear that after 140 days that there was some positivity about me because as of late I've just been the cancer of the NFL. The problem child, the guy who gets in trouble, the kind of guy who has the bad narrative about him.”

That said, Brown noted he’ll believe Goodell when he sees it. The league’s investigation into allegations against Brown is still ongoing.

Brown said he’s trying to follow the protocol set forth by the NFL to get back on a team and play. He voiced frustration at the length of the investigation, which started in September, and said other cases didn’t take so long.