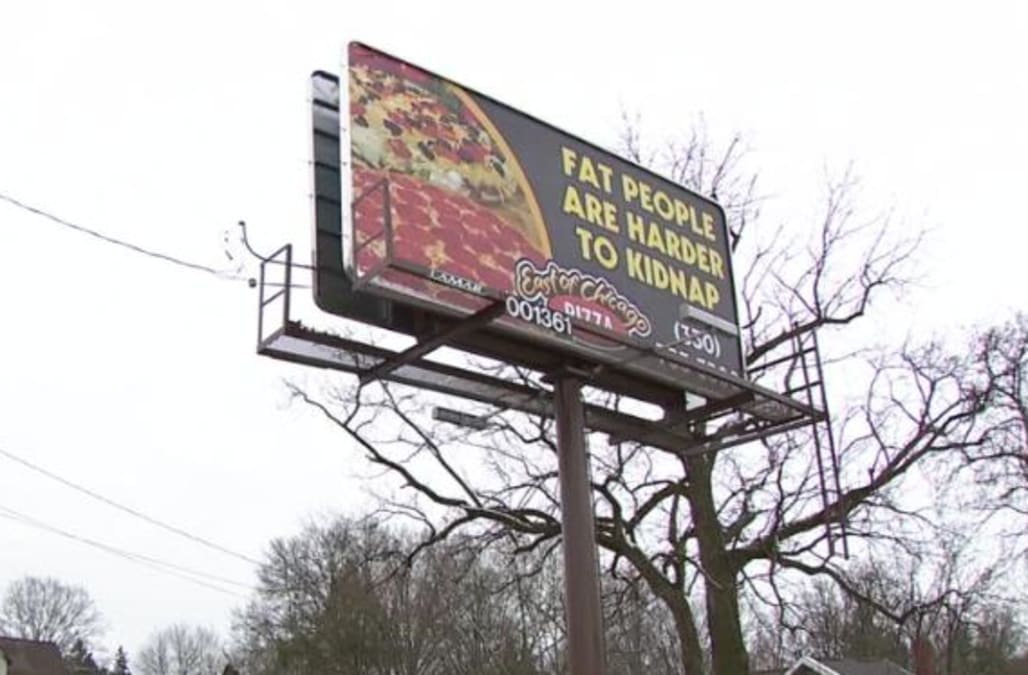 A pizza shop owner is facing backlash for a billboard that some thought made light of human trafficking.

Jeremy Clemetson, the owner of East of Chicago Pizza store in Barberton, Ohio, is known for his cheeky signs.

"We've had 'Legalize marinara,' and 'Our pizza is deep as potholes,' 'Free box with every pizza,'" he told CNN.

But his latest billboard, which said, "fat people are harder to kidnap" struck a different chord with locals.

Others took issue with the fact that the billboard makes fun of weight issues.

"The physical and emotional issues overweight people have to deal with shouldn't be made light of," someone said on Facebook.

Some people, however, found the sign to be harmless.

"I love your signs and there was absolutely nothing wrong with the kidnapping sign ... I've seen that saying on Facebook several times in memes," one customer wrote on the pizza store's Facebook page.

Clemetson holds that he did not mean to offend anyone and when he realized that January is national human trafficking awareness month, he took the sign down.

"I was more just trying to be funny. I actually had it on my sign out front for three weeks and nobody said anything except funny things about it," Clemetson told WOIO. "Once I found out, you know, I have seven kids myself. That it was more sensitive to people because of the kidnapping aspect we actually took it down today."

The pizza shop owner doesn't plan to stop putting up his comical signs, but he told CNN he will likely put more consideration into what it says next time.

"I probably will think more when I put up my next sign. I don't want to end up on national news again," Clemetson said.

More from Aol.com:
Firefighter claims she was fired over 'racy' Instagram photos: 'It's just really hypocritical'
Restaurant sparks debate with body-shaming billboard: 'People need to stop being so sensitive'
A newly-built chunk of Trump's border wall blew over in heavy wind and landed in Mexico