Sofia Kenin fought off two set points in each set en route to an upset win over top-seeded Ashleigh Barty on Thursday in the Australian Open semifinals at Melbourne, earning a trip to her first career Grand Slam final.

Kenin, a 21-year-old American who is the tournament's 14th seed, pulled out a 7-6 (8-6) 7-5 victory. She never previously reached the quarterfinals of any major tournament.

Barty, a 23-year-old Australian, is ranked No. 1 in the world after winning the French Open and the WTA Finals last year. 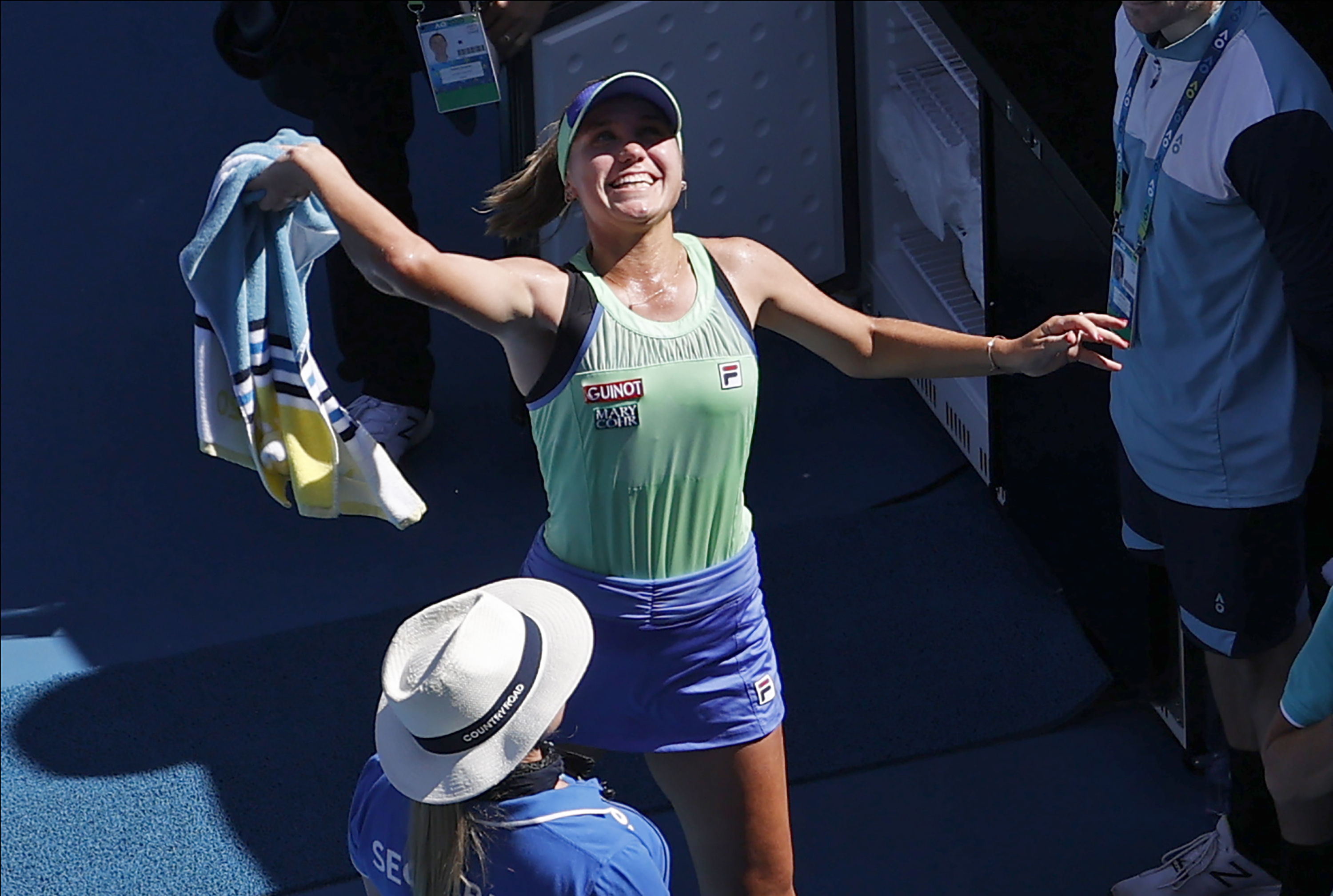 In the final, Kenin will oppose a former world No. 1, unseeded Garbine Muguruza of Spain, who beat fourth-seeded Simona Halep of Romania 7-6 (8), 7-5 in the second semifinal. Muguruza also saved four set points in her win.

Kenin was in disbelief when she was interviewed on court after the match -- especially considering the fact that she easily could have lost in straight sets.

"She's such a tough player, and she's playing really amazing," Kenin said. "I knew I really needed to find a way to win. ... This really wasn't an easy one, but I'm just so grateful and thankful for this moment.

"Honestly, I'm just so speechless. I honestly can't believe this. I've just dreamed about this moment since I was 5 years old. ... I've worked so hard to get here."

Neither player broke serve in the opening set, with only one game featuring break points. Barty had three break opportunities with Kenin serving at 2-3, but Kenin saved all three.

In the tiebreaker, Barty jumped in front 6-4, but Kenin won the next four points to claim the set.

Barty finally earned a service break to grab a 2-1 lead in the second set. She had two set points while serving at 5-4 but couldn't take advantage, with Kenin ultimately breaking back. Kenin went on to seal the match by breaking serve when Barty sailed a forehand too long.

Muguruza shook off two set points while serving at 5-6 in the opening set, then two more in the first-set tiebreaker. Like Kenin, she broke serve on the match's last point to seal a straight-sets win.

"I wasn't thinking I was down," Muguruza said in her postmatch interview. "At some point you are going to have your opportunity. I know I was facing Simona so it was going to be a hard match, so I was just hanging in there and fighting with all the energy I had."

Muguruza, 26, won the French Open in 2016 and Wimbledon in 2017, but her best previous result at the Australian Open was a quarterfinal defeat in 2017. She is currently ranked No. 32 in the world.

More from Aol.com:
Heart-stopping video shows man leaping between floors of high-rise building
Novak Djokovic got choked up at the Australian Open while discussing how he leaned on Kobe Bryant for advice
15-year-old Coco Gauff summed up her whirlwind journey to stardom after stunning defending champion Naomi Osaka at the Australian Open: 'What is my life?!'