Kyrie Irving opens up about the loss of mentor Kobe Bryant 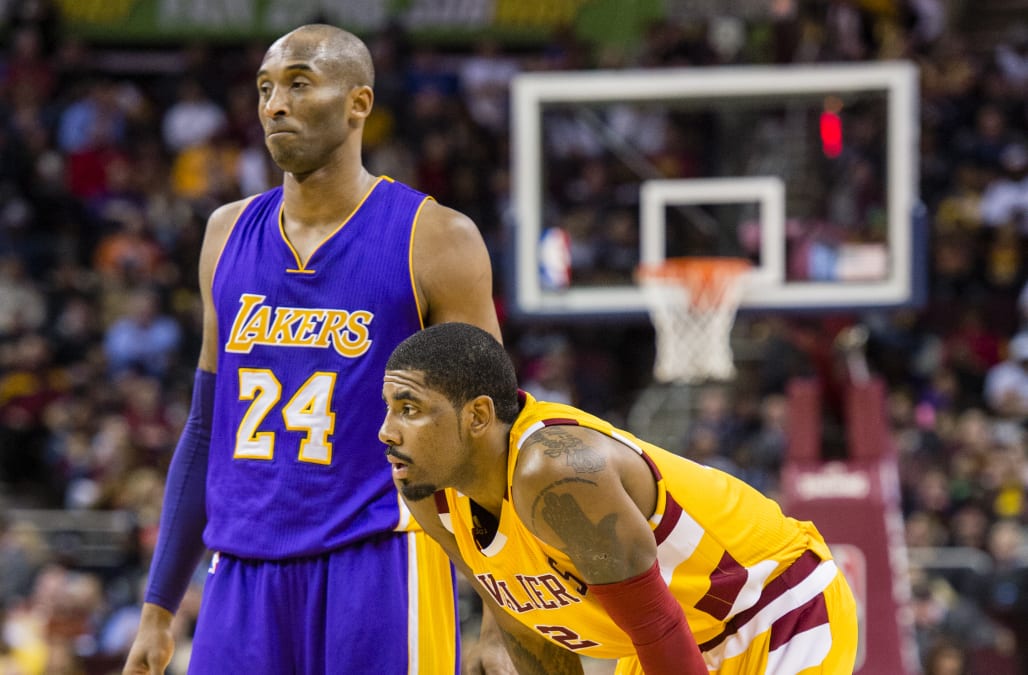 NEW YORK — Kyrie Irving put it in the simplest of terms.

Time has seemingly stood still since the death of Kobe Bryant, his daughter, Gianna, and seven others in a helicopter accident Sunday morning, an absence Irving is still grappling with after losing his mentor.

Irving returned to the floor Wednesday after missing Sunday night’s game against the New York Knicks, hours following the announcement of Bryant’s death. Irving played 33 minutes in a 125-115 win over the Detroit Pistons at Barclays Center, where a tribute to Bryant was held before tipoff.

“It’s an open wound,” said Irving, who scored 20 and added five assists and five rebounds. “I’m doing my best to focus on the game.”

Two seats at center court, seats where Bryant and Gianna sat last month when visiting, were vacant with a flower on each in remembrance. Gianna was on the plane with Kobe, on their way to Bryant’s Mamba Academy for games Sunday morning when the crash occurred.

“Where I come from, my native North Dakota, South Dakota [Standing Rock Sioux Tribe], you lay that craft down, that craft you love so much,” Irving said. “That’s what I did at MSG [on Sunday]. I couldn’t even come up with wanting to play that game. It’s still heartbreaking.”

He compared the loss to that of a family member, putting it in the same breath with losing his grandfather last season in Boston — which he said contributed to his uneven year that ended in his departure to Brooklyn.

Irving was arguably Bryant’s most notable pupil, and he soaked up all Bryant had to offer over the years. The two notably made a playful bet during a USA Basketball practice when Irving was a rookie, with Bryant saying he was going to give Irving’s Cleveland Cavaliers a 50-point game due to Irving’s challenge.

Related: Kobe Bryant and his family

That wasn’t then where their relationship blossomed but years later, Irving said, in an emotional, unguarded setting following a game.

“I asked him for help, maybe four, five years ago,” Irving said. “Asked him for some help. I wasn’t ready to be a mentee at that point.”

Irving, with a rare smile, said, “I’m gonna go deep on you guys, you know I am.”

“In some ancient texts it says when the student is ready, the teacher will appear,” Irving said. “I had that type of mentorship relationship with him. I could ask him anything, no matter how nervous or how fearful I was.”

It’s hard to picture Irving, a fearless competitor on the floor with his history of making big shots in big moments, as vulnerable. But he had that kinship with Bryant, so much so that after the biggest shot of Irving’s career — a clutch 3-pointer that sealed the Cleveland Cavaliers’ win over the Golden State Warriors in the 2016 NBA Finals — he FaceTimed Bryant in the locker room during the wild celebration.

“He was easy to approach with those type of questions with what goes on in a day-in and day-out basis on chasing something that’s bigger than yourself,” Irving said. “When you’re trying to leave a legacy or a mark on the game, there will come a lot of sacrifices and a lot of hate, a lot of love and a lot of balance you must create in your life.”

Whether Irving has found that balance remains to be seen, going through such an uneven journey since 2016 and just recovering from a shoulder injury that cost him nearly two months this season.

With Bryant gone, there is a void Irving isn’t likely to fill anytime soon.

“He left a lot of teachings, a lot of bread crumbs, as I call them,” Irving said. “And I just followed every single one of them. That probably pays a lot of focus into the person I am today. Just listening, seeing what he was creating. Seeing his daughter, Gigi, and opening doors in women’s sports. We talked about it all the time. I wanted that same structure.”

He referred to Bryant as a leader people wanted to follow, even calling himself one of the “little mambas” Bryant took under his wing. Bryant became more open and available to other players following his 2013 Achilles’ injury, spending the rest of his playing career preparing for life after basketball.

Bryant made it clear he would not be an athlete struggling for purpose or passion when his time with the game was over, bucking popular belief.

“He had his own company, he had his own belief system, his own principles that he lived,” Irving said. “Excuse my language, he didn’t give a f--- what anybody said. Having that type of strength.”

Irving can speak in riddles, often subject to interpretation or even ridicule. It seems like some of that came from Bryant.

“Some people would text him, ‘What about this shooting slump?’” Irving said. “He would say stuff like, ‘The next shot is the best shot,’ or ‘Figure it out,’ or ‘F--- em all.’ Simple things.

“But it was what he helped you see inside of yourself. It wasn’t the words, it was something inside you he knew was there but you had to tap into it. And he tapped into it all the time when was playing the game of basketball, when he was around his family. He’s getting his just due and his legacy now, more than ever. You don’t have to worry about anyone not being on Kob’s side. I’ve been on Kob’s side for a long time. That’s what I remember, all encompassing our relationship. It’s deeper than basketball.”

It’s just the start of the grieving process for so many, and Irving wasn’t in any rush to press the fast forward button. He’s going to feel this for a very long time.

“It’s nothing easy to turn the page and flip a switch,” he said. “You go through every emotion. You be human.”