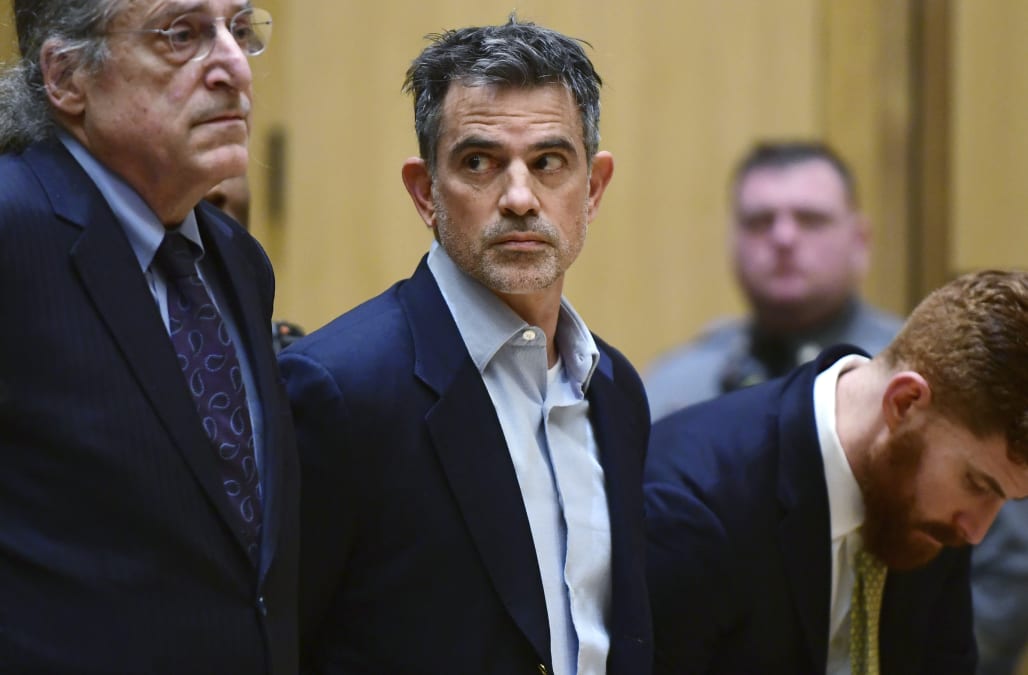 Fotis Dulos, 52, had been hospitalized with carbon monoxide poisoning since Tuesday, when he was found unresponsive inside a vehicle in the garage of his house in Farmington, Connecticut.

“To those who contend that Mr. Dulos' death reflects a consciousness of guilt, we say no," lawyer Norm Pattis said.

Dulos, a luxury home builder originally from Greece, was accused of killing Jennifer Dulos, who has not been seen since she dropped their five children off at school in New Canaan in May. Her body has not been found despite extensive searches. Fotis Dulos had denied any role in her disappearance.

The children, who ranged in age from 8 to 13 when their mother vanished, have been staying with their maternal grandmother in New York City.

On the day Fotis Dulos was found stricken, he had been facing an emergency bond hearing where he could have been sent back to jail. The company that originally posted the $6 million bond had learned that two properties offered as collateral were subject to foreclosure and a third was overvalued.

Police officers who went to check on Dulos because he was late for the hearing saw through a garage window that he was in medical distress. Emergency responders forced their way into the garage and initiated CPR. A lawyer for Dulos and others initially said he had died before saying a pulse had been found.

Dulos was taken to the hospital in critical condition and transferred to the Jacobi Medical Center in New York City for hyperbaric treatment. An attorney for Dulos, Norm Pattis, said late Wednesday that his client's condition was “dire.” His family was traveling from Greece to be with him, according to his defense lawyers.

Fotis Dulos was under house arrest and alone at the house at the time of the apparent suicide attempt, Farmington police said. He had been arrested Jan. 7 on murder and kidnapping charges, capping a lengthy investigation in which he emerged early as the primary suspect.

Warrants released last summer, when Dulos was charged initially with evidence tampering and hindering prosecution, said that he and a girlfriend were seen on video surveillance driving in Hartford around the time Jennifer Dulos was reported missing. The man was seen tossing garbage bags into more than 30 trash bins in the area that were later determined to have items with Jennifer Dulos’ blood on them.

Items in the garbage bags included clothing belonging to Jennifer Dulos and plastic zip ties that later tested positive for her DNA.

In filings in the two-year divorce proceedings, Jennifer Dulos said she was worried for her safety and that of the couple’s children.

In the arrest warrants, police suggested a possible financial motive, saying Fotis Dulos was $7 million in debt and would have had some access to the children's trust funds if Jennifer Dulos died. Fotis Dulos denied that allegation.

Police allege Fotis Dulos lay in wait at Jennifer Dulos' home in New Canaan for her to return after dropping the children off. Authorities say Fotis Dulos attacked the woman in her garage, leaving behind a bloody crime scene, and drove off with her body.

Dulos had pleaded not guilty to the charges.

Fotis Dulos' former girlfriend, Michelle Troconis, and his friend, attorney Kent Mawhinney, are both charged with conspiracy to commit murder. Police said they helped Fotis Dulos try to cover up the killing, including by creating bogus alibis.