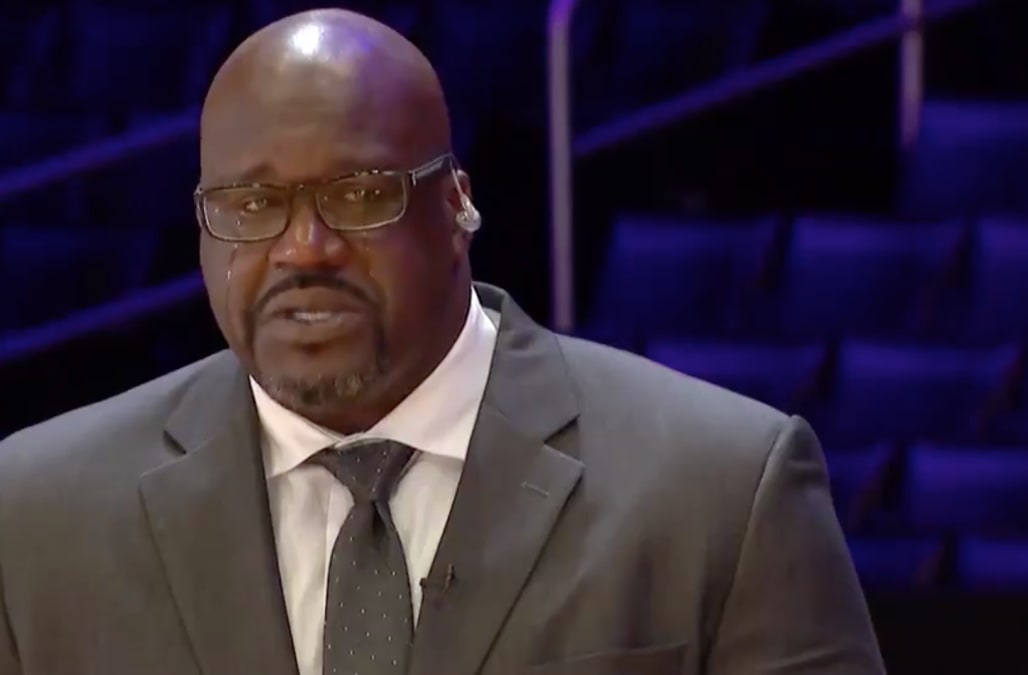 The tributes to Kobe Bryant continued to roll in on Tuesday as the “NBA on TNT” crew took to air for the first time since his death in a helicopter crash on Sunday.

It marked the first time that Shaquille O’Neal — Bryant’s teammate on three championship teams with the Los Angeles Lakers — has spoken publicly on the tragedy.

O’Neal released a Twitter statement in the immediate aftermath of the news, mourning the loss of “my brother.” He broke down in tears on the TNT set Tuesday as he, Ernie Johnson, Charles Barkley, Kenny Smith and Dwyane Wade opened up about Bryant as they broadcast from the Lakers court at Staples Center.

“I haven’t felt a pain that sharp in a while.. it definitely changes me.”’@SHAQ on the loss of his brother, Kobe. pic.twitter.com/dM5i0DDgGK

“We’re up here and we work a lot,” O’Neal said. “And I think a lot of times we take stuff for granted. I don’t talk to you guys as much as I need to. The fact that we’re not gonna be able to joke at his Hall of Fame ceremony.

Even with his personal and professional ties to Bryant, O’Neal’s reaction to the news was like that of many of Bryant’s fans who were shocked by the news on Sunday — an urge to reach out to loved ones and not take for granted relationships that matter.

“With the loss of my father, my sister — that’s the only thing I wish I could just say something to him again,” O’Neal continued through tears. “The last time I talked to him was when we were here, and I asked him to get 50. And he got 60. That’s the last time I spoke to him.”

O’Neal was referring to Bryant’s last game that saw him score 60 points against the Utah Jazz at Staples Center. That game took place on April 13, 2016. Though the two have been seen together since, O’Neal feels regret over not spending more time with Bryant.

O’Neal reminisced about the early days with the Lakers when Bryant joined the team as a 17-year-old rookie and Shaq signed that same summer as a free agent from the Orlando Magic.

Kobe had big plans from the start. pic.twitter.com/MqFdyPVQnj

“Now when Kobe came, I kind of sat him down and said ‘what do you want to be?’” O’Neal continued. “At 17, he said ‘I’m gonna be be the best player in the world. And off the court I’m gonna be bigger than Will Smith.’

Six seasons later, O’Neal and Bryant had led the Lakers to three straight championships as one of the most iconic tandems in the history of the game.

“I truly believe we will be the most dominant big-little one-two punch ever,” O’Neal said.

Bryant’s death has shaken the basketball world and beyond. For many, it was a harsh reminder of the fragile nature of life.

For Shaq, who lost his sister Ayesha Harrison-Jex to cancer just last year, it was a stark and unnecessary reminder.

The extended clip of O’Neal’s statement can be seen below:

“I haven’t felt a pain that sharp in a while.. it definitely changes me.”’@SHAQ on the loss of his brother, Kobe. pic.twitter.com/dM5i0DDgGK

More from Yahoo Sports:
Viral Kobe Bryant clip on ESPN inspires others to tell their #girldad stories
All 9 bodies recovered from 'devastating' site of crash that killed Kobe Bryant
Tracy McGrady says young Kobe Bryant told him 'I want to die young, I want to be immortalized'