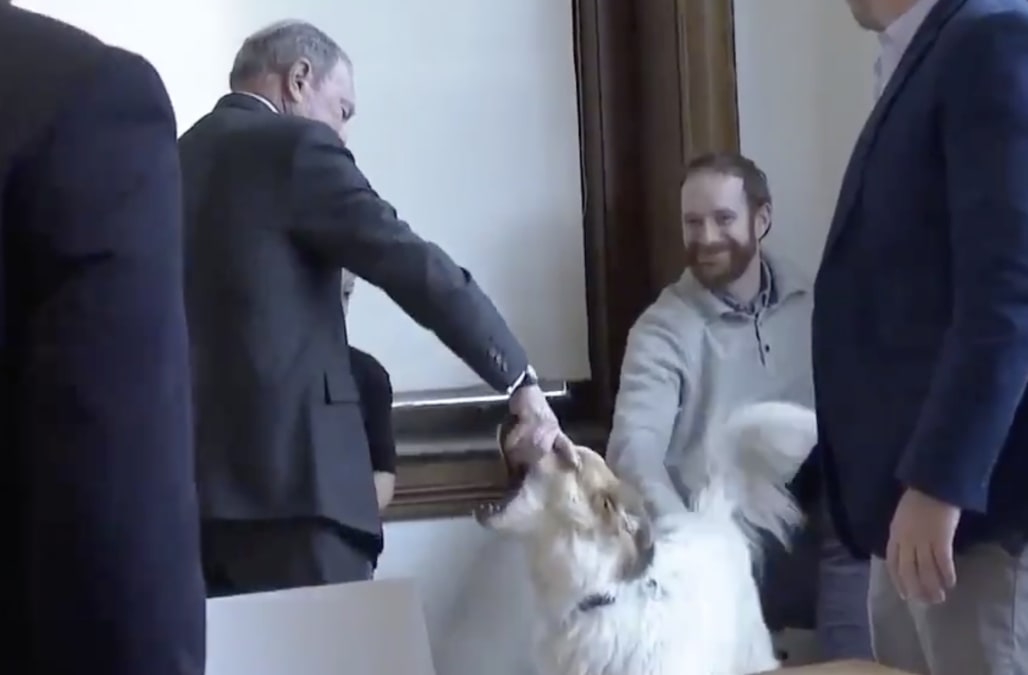 The awkward moment was caught on video by reporters in the room and quickly went viral on Twitter, garnering more than 4 million views. In the clip, Bloomberg is seen shaking a man's hand before turning to the dog, whose mouth is open, and fully shaking its face.

I know I’m told to stick to sports, but I just can’t stay silent on this.

I have disqualified Mike Bloomberg from the presidential race for shaking a dogs face. pic.twitter.com/GTqlkDRXr6

"Hmmm shake my paw, not my teeth thx," a tweet from the official account of Sen. Elizabeth Warren's dog, Bailey, said.

Hmmm shake my paw, not my teeth thx Mike https://t.co/ZSu9trRudI

One person uncovered a photo showing that this isn't the first time Bloomberg has shaken a dog by its snout. The photo is reportedly from 2013, when Bloomberg attended the Norwegian Breakaway Cruise Line Christening and Inaugural at New York City's Pier at the Hudson. In the snapshot, he's shaking the dog's mouth in the same way as he did this week.

Apparently this is not even the first time Mike Bloomberg has greeted a dog by shaking its snout. pic.twitter.com/oTxMY2M40Y

Gothamist attempted to get to the bottom of the question on everyone's mind and asked Stu Loeser, a Bloomberg spokesman, "does Mike Bloomberg know how to pet a dog?"

Loeser responded: "You know that he's playing with the dog, right?"

"He plays with his dogs and his kids' dogs the same way," Loeser told Insider. "Mike's never met a dog he doesn't like and vice versa."

When asked by Fox News if Bloomberg would have a dog of his own in the White House, should he get elected, Loeser couldn't confirm, saying, "We don't want to bite off more than we can chew right now."

More from Aol.com:
As coronavirus spreads, Biden says Trump is 'the worst possible person' to keep America safe
Hillary Clinton says she 'wasn't thinking about the election' when she made controversial comments
Bloomberg campaign manager: Trump would 'decisively' beat Sanders