A bakery is delivering every GOP senator a cake with a pointed message: 'This trial is half-baked' 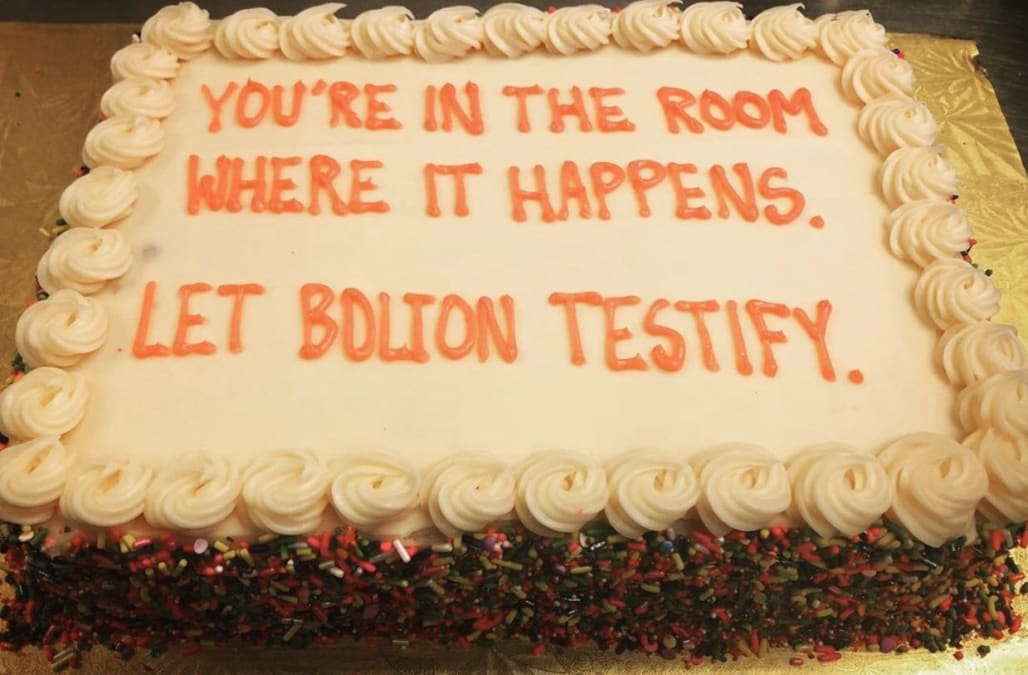 Senators are going to have their impeachment cake and eat it too. A bakery is delivering 53 special cakes today, one for every Republican senator, with one simple message.

The idea started with a GoFundMe on Monday, organized by Colin Bishopp, with the goal of sending all 53 Republican senators a timely gift.

"Republicans in the US Senate refuse to allow witnesses in President Trump's impeachment trial, so let's deliver them John Bolton's testimony on a cake. Maybe that will make the truth easier for them to swallow," the GoFundMe says.

In just two days, the fundraiser has raised $6,724 of its $7,000 goal, which was enough to team up with Butter & Scotch, a New York-based bakery, to get the cakes baked and decorated. In accordance with senate ethics rules – the cost of each cake is less than $50. As a general rule, senators are not allowed to knowingly accept a gift valued over $50.

BREAKING: These sheet cakes are being delivered to all GOP Senators tomorrow.#ImpeachmentCakes#JohnBoltonMustTestifypic.twitter.com/4PqPb8gTQM

A decorator from the bakery traveled to Washington, D.C., to decorate all 53 cakes with different messages. According to an Instagram story from Carina Kolodny, who is delivering the cakes and documenting the day online, it will take her around 3 hours to write on every cake.

The first few cakes were posted on Instagram early Wednesday. The first one was brought to Sen. Ted Cruz, who the bakery said turned it away. Some of the messages read:

"You're in the room where it happens. Let Bolton testify."

"This trial is half-baked without witnesses. Let Bolton testify."

The first three cakes done! First one was sent to @sentedcruz who turned it away. Follow @carinakay for live updates throughout the day!

The message to let former national security adviser John Bolton testify comes from a long debate during opening statements of the Senate trial.

Earlier this week, the New York Times reported that a manuscript of Bolton's unpublished book says that Trump told Bolton in August that nearly $400 million in aid to Ukraine would not be released until the country provided all of the information it had in connection to the investigations of Democrats.

Trump denies this ever happened and that he fired Bolton publicly. Bolton, however, asserts he was not fired.

"I NEVER told John Bolton that the aid to Ukraine was tied to investigations into Democrats, including the Bidens. In fact, he never complained about this at the time of his very public termination," the president tweeted.

I NEVER told John Bolton that the aid to Ukraine was tied to investigations into Democrats, including the Bidens. In fact, he never complained about this at the time of his very public termination. If John Bolton said this, it was only to sell a book. With that being said, the...

Democrats are demanding that Bolton testify, but Republican senators are not accepting further testimony. Maybe the cakes will be the thing to change their minds.

More from Aol.com:
Trump, trying to head off testimony, says Bolton would have started ‘World War Six’
AP source: McConnell says he can't yet block new witnesses
Details on Trump's affairs and how 'fixers' covered them up revealed in new book