Trump lawyer says Bolton testimony would make no difference, even if his book is true 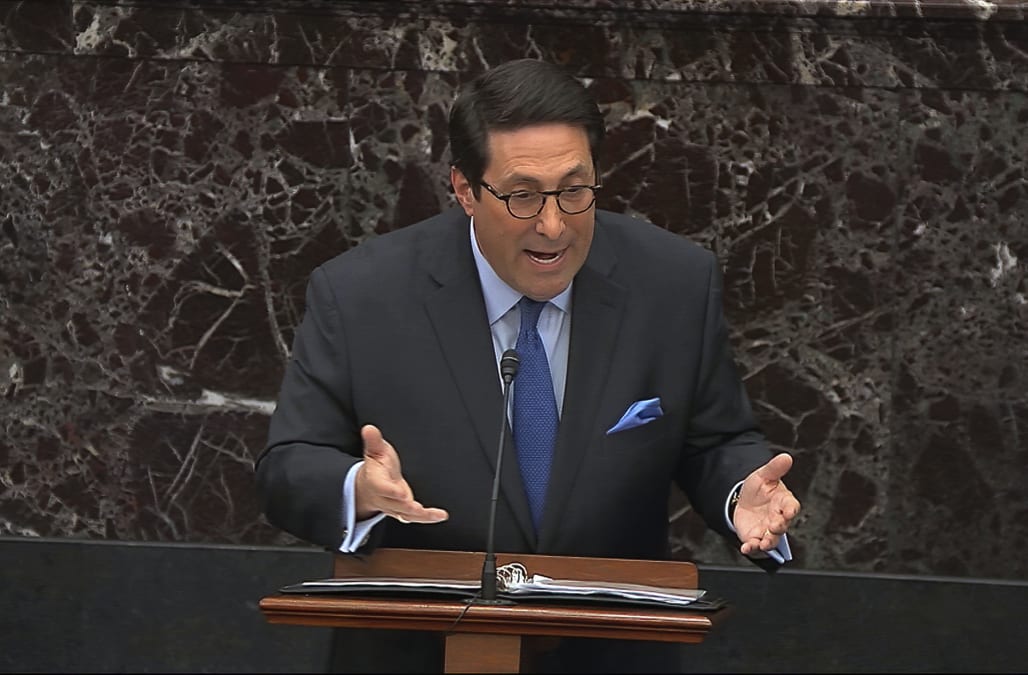 As Democrats continued to demand testimony from former national security adviser John Bolton in the Senate impeachment trial of President Trump, defense lawyers said Tuesday that Bolton’s testimony was irrelevant, because even if his account of his conversation with the president is accepted, the facts don’t support a conviction under the Constitution.

“You cannot impeach a president on an unsourced allegation,” Trump lawyer Jay Sekulow said of Bolton’s forthcoming book, “The Room Where It Happened: A White House Memoir,” which disputes a key defense assertion. “Even if everything in there was true, it constitutionally doesn’t rise to that level.”

In the book, according to the New York Times, whose reporters spoke to sources who have read it, Bolton describes a conversation in August 2019 with Trump, who told him he was withholding $391 million in military aid to Ukraine until the government in Kyiv announced an investigation into former Vice President Joe Biden and his son Hunter.

That is the crux of the first of two articles of impeachment passed by the House — the “quid pro quo” whose existence the president and his defenders have denied all along. Until the news broke about Bolton’s book, which is scheduled to be published in March, the testimony directly implicating Trump in the scheme was mostly secondhand.

It is unclear what Sekulow meant by “unsourced allegation,” as Bolton’s book recounts conversations he personally participated in. Sekulow went on to say that Trump denied Bolton’s account.

“But I want to be clear on this, because there’s a lot of speculation out there. With regard to what John Bolton has said, which referenced a number of individuals — we’ll start with the president,” Sekulow said. “Here’s what the president said in response to that New York Times piece: ‘I never told John Bolton that the aid to Ukraine was tied to investigations into Democrats, including the Bidens. In fact, he never complained about this at the time of his very public termination. If John Bolton said this, it was only to sell a book.’”

Bolton was known to be an assiduous note taker, carrying a yellow legal pad with him into White House meetings and typing up his written accounts each night. House Democrats have argued that Bolton and others in the Trump administration should be compelled to testify in the impeachment trial. Trump and many of his Republican defenders have sought to block witnesses from appearing.

Sekulow also sought to downplay a second story in the Times that reported that Bolton had held private conversations with Attorney General William Barr regarding concerns about the president’s relationships with foreign leaders.

“While the Department of Justice has not reviewed Mr. Bolton’s manuscript, the New York Times account of his conversation grossly mischaracterizes what Attorney General Barr and Bolton discussed,” Sekulow said. “There was no discussion of personal favors or undue influence on investigations, nor did the attorney general state that the president’s conversations with foreign leaders were improper.”

After the president’s team ended their presentation, having used only around half of their allotted 24 hours, House manager Adam Schiff, D-Calif., told reporters on Capitol Hill that the defense arguments only bolstered the need to hear directly from Bolton.

“Once again, the president’s team — in a way that only they could — have further made the case for calling John Bolton,” Schiff told reporters. “It’s clear, I think, today that they are still reeling from the revelation of John Bolton’s book and what he has to say. The very relevant and probative quality of testimony that he should give the Senate.”

Schiff pointed out that Bolton has offered to appear before the Senate if he is subpoenaed, adding that if it’s Bolton’s word against Trump’s, only the former is willing to testify under oath.

Three-quarters of voters say they want to allow witnesses in the Senate trial, according to a Quinnipiac University poll released Tuesday.