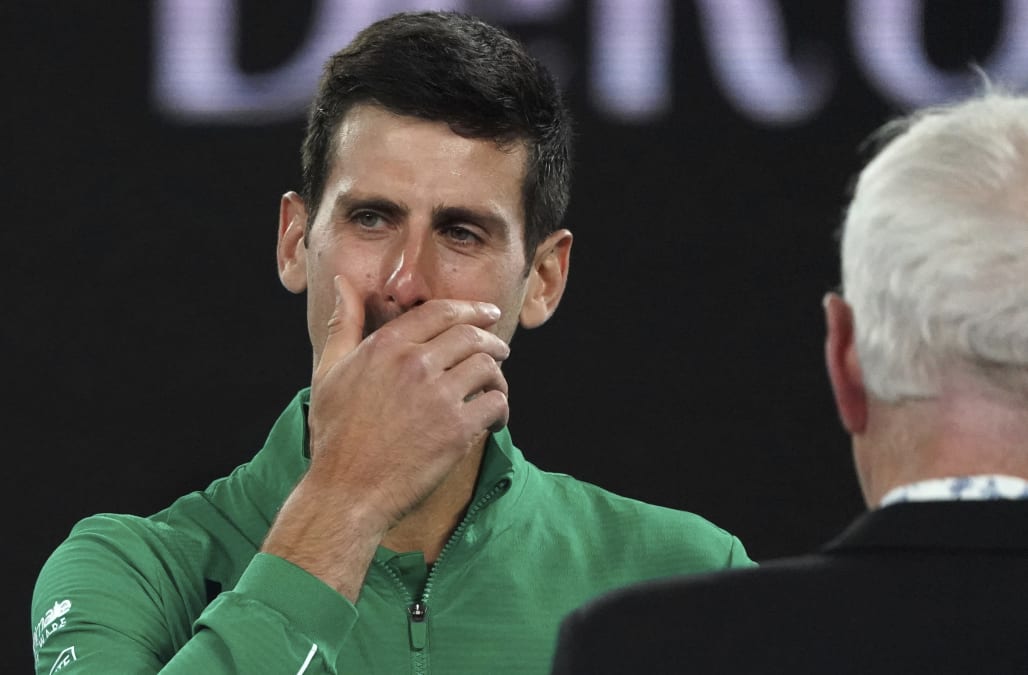 After Novak Djokovic played his first match since Kobe Bryant's tragic and untimely death, the Serbian tennis star took a moment to honor his "mentor" and his late daughter, Gigi.

Djokovic wore Bryant's initials and both of his jersey numbers — eight and 24 — stitched into his jacket during a post-match interview with John McEnroe.

After defeating Canada's Milos Raonic in straight sets Tuesday, Djokovic teared up while describing what Kobe's influence and support meant to him.

"I don't know what we could say," he began. "It really caught us by surprise. He was one of the greatest athletes of all time. He inspired myself and many, many other people around the world and I had the fortune to have a personal relationship with him over the last 10 years."

"When I needed some advice and some support, he was there for me," he added, choking up. "He was my mentor, my friend, and it's just heartbreaking to see and to hear what has happened to him and his daughter."

"He was there for me"@DjokerNole pays tribute to his late friend and mentor Kobe Bryant.#AO2020 | #AusOpenpic.twitter.com/k8sRHcBATw

After many tennis matches, the winner is asked to sign the camera lens with their name. On Tuesday, Djokovic took the opportunity to honor the Bryants by writing Kobe's initials, Gigi's name, and Kobe's numbers in a heart.

Novak Djokovic made a tribute to Kobe and Gianna Bryant after his match at the Australian Open. pic.twitter.com/Bl6OPSEgDB

Just two days before Bryant's death, Djokovic spoke extensively about his influence on his game and how much he valued his mentorship.

Djokovic will move on to face Roger Federer in a star-studded semifinal match Thursday. Bryant, who was 41 years old, is survived by his wife, Vanessa, and three of their daughters.