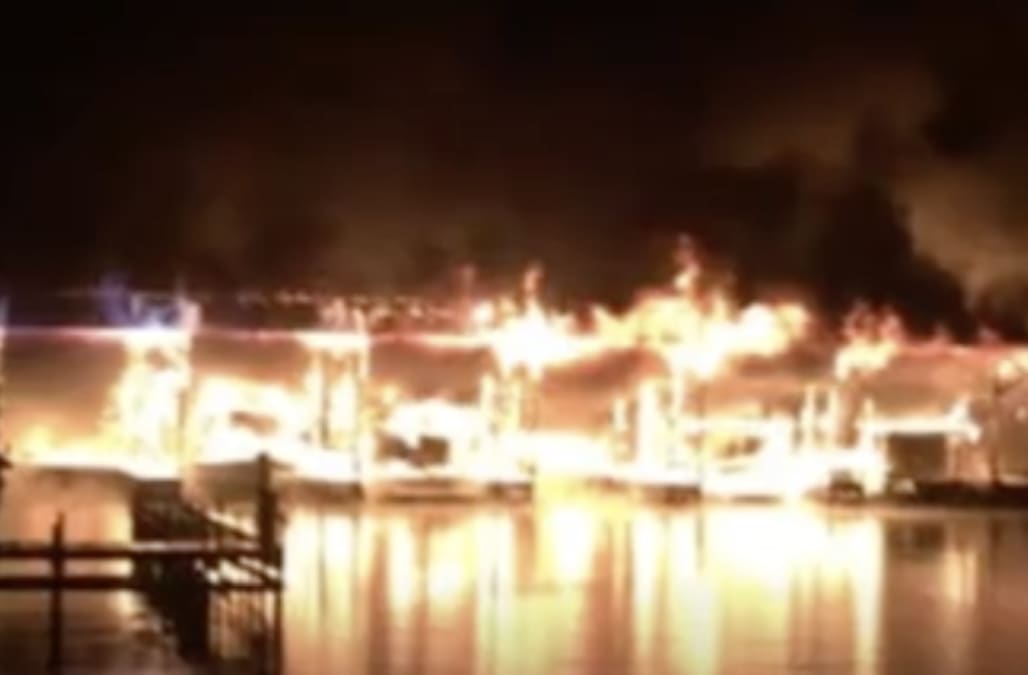 SCOTTSBORO, Ala. — Boaters leaped into the water to escape a fire that consumed at least 35 vessels docked along the Tennessee River early Monday. Authorities said there were fatalities as 7 people were sent to hospitals and 7 others were initially reported missing.

The blaze was reported shortly after midnight as people living in the boats were sleeping, and consumed the wooden dock and an aluminum roof that covered many of the vessels, cutting off escape routes and raining debris into the water.

"There were numerous people rescued from the water who had escaped by going into the water," Jackson County Chief Sheriff's Deputy Rocky Harnen told The Associated Press shortly after dawn. “We're trying to get divers down here to search for possible victims in the water.”

Mandy Durham was on her boyfriend's boat when the fire broke out on the B dock, about 50 yards (46 meters) from the A dock where their vessel is moored.

"We woke up hearing screams and popping noises," she said. “When we woke up, we could see red through the window.”

"Within 15 to 20 minutes, the whole dock was in flames.," she said. "All these boats have propane tanks and gas tanks, and that’s a lot of fire."

"Water was the only place they had to go," Durham said. “Its just extremely sad. It's horrible.”

Harnen said "we have some confirmed fatalities, but we don't have an exact number yet.”

“We have several people who were taken to the hospital from being in the water, and some had minor burns," Harnen added.

Scottsboro Fire Chief Gene Necklaus said earlier that 7 people were hospitalized and 7 others were missing as the fire destroyed at least 35 boats docked in Jackson County Park.

Harnen said officials are trying to account for about seven people who had places on the dock.

It's been a challenge for rescuers to reach the victims, Harnen said: "The damage from the dock has fallen on top of the boats, and some of the boats have drifted off," he said. The aluminum roof and wood structure was destroyed, as were about three dozen boats. Crews also were using booms in an attempt to contain fuel in the water, he said.

Crews were called to the fire at about 12:30 a.m. on Monday. The chief said most of the vessels had people living on board.

The Jackson County Emergency Management Agency says firefighting and rescue operations have been taking place on land and in the water.

The park on the Tennessee River includes a boat ramp, a dock and a restaurant, and offers boat rentals, according to Jackson County's government website.